HomeProducts and TrendsFood and BeverageWhy hot sauce sales are soaring
Recent
Latest
Sponsored Content
How brands can get their trade spend under control – article
Sponsored Content
Going organic lifts everyone up – video
6 natural brands partner with UNSTUCK on new product line to aid refugees
Jun 23, 2022
Sponsored Content
The power of organic messaging – download
Trending
Getting ready for 2023: Trends for brands to consider
May 17, 2022
Unboxed: 7 clean collagen powders with a twist
Jun 21, 2022
12 brands marketing positivity, kindness and joy
Jun 17, 2022
Coca-Cola axes Honest Tea, but its founders are just getting started
Jun 07, 2022

Why hot sauce sales are soaring

Given the cult following behind the likes of Cholula and, more popularly, Huy Fong’s Sriracha, it’s no surprise that hot sauce is booming in the United States. Heck, there are even cheeky quizzes that indicate your addiction level to the green-topped “rooster” sauce (lamentably, I scored high as the “Dark Lord of Sriracha.”)

So mayo, out. But what of the old ketchup and mustard ballpark standbys? Are they a thing of yesteryear? Yes, in a nutshell—they have fared much worse. According to the below graph by Quartz, both condiments flat-lined by 2009, and were surpassed by barbeque sauce in 2010.

Though Quartz attributes the rise in hot sauce to an influx of immigrants from regions whose cuisine is traditionally rife in spices (India, Asia, South America), I think Americans are simply growing more exploratory with their food choices. It may be the rise of foodie blogs, a growing Food Network eat-anything culture, or even the diverse Millennial population. But given the growth, it's safe to project that this spicy trend won't slow any time soon. 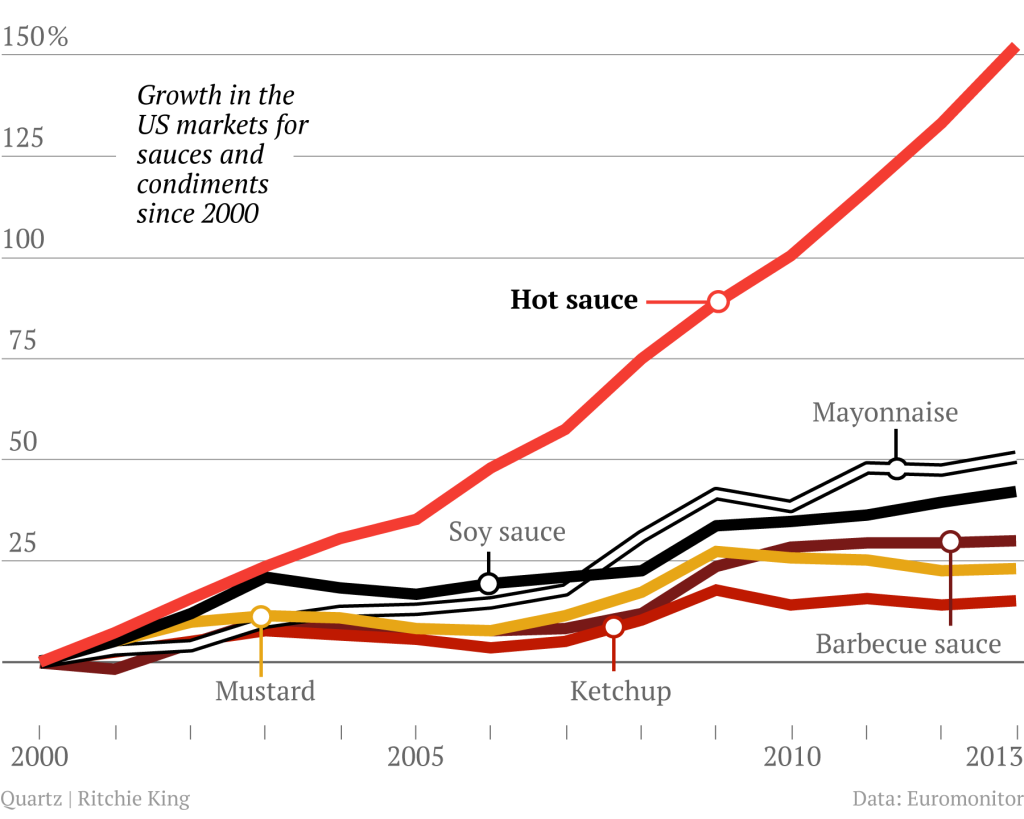