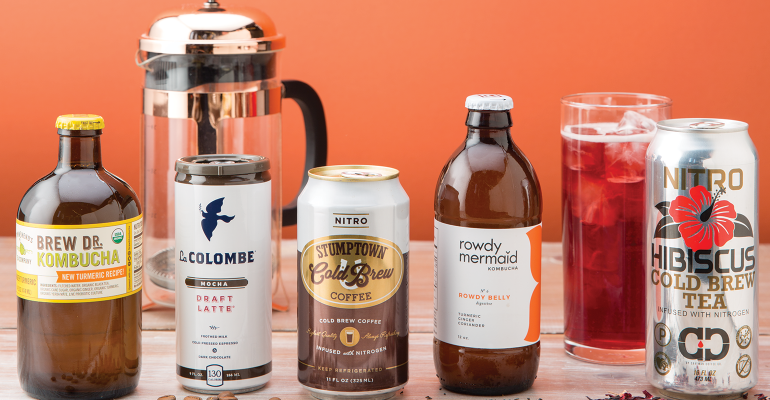 Consumers are trading up to products that offer better quality or benefits.

Ready-to-drink coffee and tea are leading the growth in the coffee and tea category, with new forms and formulations that offer both function and flavor.

Related: Smart sips for every occasion

“With a healthy economy, consumers are willing to trade up to products that offer them better quality or benefits,” he said.

However, while the high end of the market is seeing the fastest growth, most of the volume is still in the middle of the market, Hemphill said. And, although process-driven innovations have led to “exceptional growth” of such RTD coffee segments as cold brew and nitro, RTD coffee remains relatively underdeveloped, he said.

“Both [coffee and tea] categories have the wind behind their backs with healthy growth, especially coffee,” he said.

Retailers say refrigerated RTD coffees and teas are the leading segment in this category, and new varieties, such as cold brew coffee concentrate, are emerging.

Michael Arbuckle, grocery sales director at Salt Lake City-based Harmons Grocery, said premium coffee has been in strong demand in bagged bean form, but the strongest growth in the coffee category has been from RTD coffee varieties.

“There are many trends in the ready-to-drink coffee category, such as coffee with almond milk, low sugar, cold brew, nitro coffee and local coffee,” he said.

Some operators report that local roasters have been slower to gain a foothold in the RTD coffee segment. Some local cold brew coffee brands have emerged, however, and national coffeehouse brands such as Starbucks and Peet’s have RTD cold brew coffee lines.

High Brew cold brew coffee in cans is the most popular cold brew at Santa Rosa, Calif.-based Oliver’s Markets, said Michael Moody, natural foods buyer, but he noted that Peet’s Cold Brew has also been doing well, as the West Coast brand has good name recognition from its coffee houses there.

Also gaining traction, he said, are cold brew coffees with plant-based milks, such as Califia Farms Cold Brew Coffee with Almondmilk. Oliver’s also carries Chameleon Cold Brew Coffee Concentrate, which allows consumers to pair the coffee with the mixer of their choice. The retailer merchandises the concentrate in the dairy section, where customers are likely to buy the mixers they need to make the final product, Moody explained.

“Our RTD coffee sections are growing,” she said. “It’s like a subcategory to the energy segment as well as the coffee segment. It offers another option to those that are seeking an afternoon caffeine fix.”

In the RTD tea category, two of the main trends appear to be reduced-sugar formulations and yerba mate teas, said Arbuckle of Harmons Grocery.

In order to ensure that its stores are carrying the brands consumers are looking for, Harmons is rolling out new refrigerated displays that the chain itself will own.

“Most of the other stores are allowing the vendors refrigerated ends in the stores, which doesn't allow for the best brands to make it to the displays,” said Arbuckle.

“We believe artisan and local products in both coffee and tea have a bright future ahead of them and will likely continue to grow as long as producers deliver with a high-quality product that resonates with today’s consumers,” he said.