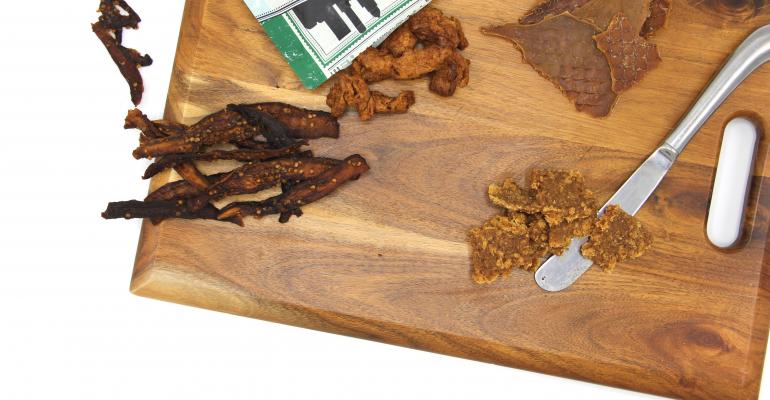 Jerky: so hot right now. From clean-ingredient beef sticks to responsibly sourced bison jerky, the meat snack category has recently charged forth, posting "compound annual sales growth of more than 7 percent over the past four years, with sales growth of 3.5 percent" for the year ending February 25, 2017, according to a Nielsen report. Remarkably, meat snacks have expanded into a $2.8 billion category.

But these ain't the sodium-laden, nitrate-containing meat snacks of late-night gas station visits. Invigorated category sales are a result of natural brands—EPIC Provisions, Mighty Bar, Wilde, Lawless Jerky, Perky Jerky and Little Red Dot Kitchen, to name a few—cleaning up the category. Blame it on paleo inclinations to snack on protein instead of excess carbohydrates such as pretzels and chips.

This is all great, but a certain subset of consumers who eschew meat (yet love clean-label ingredients and protein and fat and salt and savory flavors) are left out of the jerky parade. Thankfully, there is a hotbed of innovation stirring for vegan jerky—a seemingly contradictory product. Instead of meat, nuanced new brands are putting plant-based ingredients such as soy protein, seitan, eggplant and even coconut through the jerky-making process to craft delicious, protein-rich snacks that maintain flavor, but leave the steer, pig, turkey or chicken out of the equation. Here are a few notable examples.