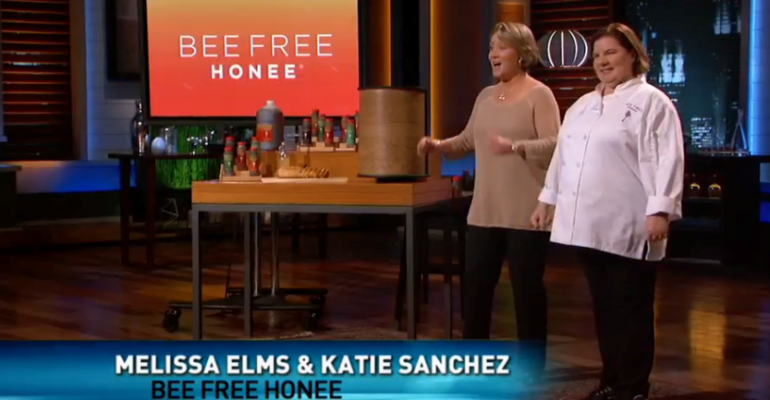 The company&#39;s next step? Breaking into foodservice by supplying to bakeries and other manufacturers.

When Bee Free Honee, the Texas-based maker of honey-like, apple-based sweeteners, left its appearance on Shark Tank in February with an investment from famed investors Mark Cuban, Barbara Corcoran and Chris Sacca, the company jumped instantly off its existing path of steady growth and onto a light-speed fast-track.

“It's really the beginning of the hard work, to be honest,” said co-owner Melissa Elms. “Since we aired on Feb. 12, we have already generated 50 percent of the revenue that we generated in the entire calendar year last year—in the course of 10 days.”

Bee Free is using its investment ($210,000 for 30 percent) in a few ways: to expand its flavor profiles, with a new flavor launch—red curry—at Natural Products Expo West, and to get a foodservice program going in the next month or so.

Elms sees foodservice as the next major area of growth for the company, predicting that after about a year, it will “easily” account for half the company's sales. Elms said that Bee Free’s possibilities for foodservice are just about endless. Supplying to bakeries will likely be one of the first they pursue, especially those catering to people looking for vegan options. “Retail is great, there’s no doubt about it, but where we feel that it’s really going is the bakehouses. People are out looking for vegan options, plant-based options—in their honey-wheat bread, now you’ve got Bee Free Honee wheat bread,” she said. “We've already done some tests in some national bakehouses and it’s done very well.” They’re also talking with manufacturers of a range of products, from barbecue sauces to spirits. Elms said they've already been approached by a spirit company that wants to substitute the honey they're using with the Bee Free Honee.

Bee Free Honee currently has four SKUs, but that will change by the end of the year. The red curry is a savory addition, but Bee Free is also getting into curative and seasonal honees. The first curative honee will contain slippery elm, meant to provide the throat-coating feeling that traditional honey is known for (as well as Throat Coat tea, which Elms said was the direct inspiration for the formula), and sometime during the spring, they will announce some seasonal honees that will likely be launched in October for the holiday season.

In addition to the capital that the Shark Tank deal is providing Bee Free, the investors have also been helping the Bee Free team with access to resources—including assistance with finding a copacker that will help the company to keep up with the growth in demand and to meet its $5 million goal by 2017, and the launch of an e-commerce site, which Bee Free didn't have before. “We'd never sold online before. Now we've done over 2,400 direct to consumer orders,” Elms said.