HomeProducts and TrendsFood and BeverageWant to strengthen organic? Grow organic supply chains
Recent
Latest
4 tips to get ahead of chemical concerns in packaging
May 20, 2022
7 CBD favorites in the increasingly popular gummies format
May 20, 2022
Mission MightyMe helps parents introduce allergens to babies
May 20, 2022
UNFI's Eric Dorne to step down as chief operating officer
May 20, 2022
Trending
Whole Foods' honors 30 companies with 10th annual Supplier Awards
May 18, 2022
Sponsored Content
The rise of sustainable business – eGuide
Sponsored Content
Getting ready for 2023: Trends for brands to consider
May 17, 2022
Sponsored Content
Debra Stark’s light shines bright on natural products industry
May 10, 2022 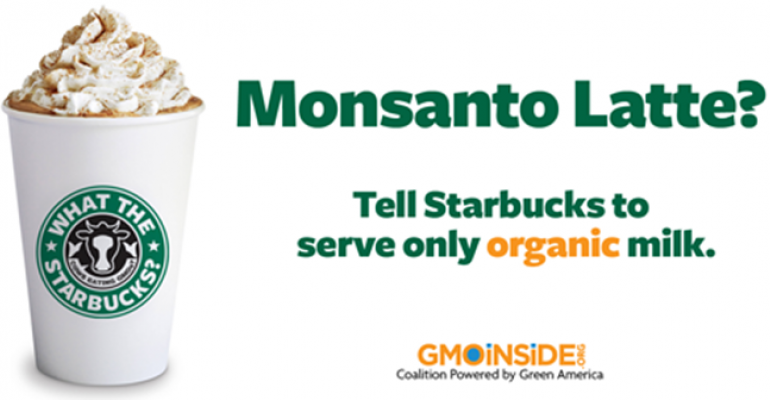 But with size comes scrutiny, evidenced by GMO Inside’s new campaign that prods Starbucks to offer organic milk in its more than 20,000 retail locations across the globe. “It is essential that Starbucks transitions to organic milk,” says GMO Inside, a subset of Green America. “By setting the standard, Starbucks can demonstrate a serious commitment to providing environmentally and socially conscious products and set a tidal wave of change within the dairy industry.”

That’s a worthy goal, but also a lofty one.

Starbucks purchases more than 140 million gallons of conventional milk per year. And because the U.S. animal feed industry is the largest purchaser of U.S. corn and soybean meal, according to GMO Inside, we can assume the majority of cows are fed genetically engineered crops grown with the help of synthetic pesticides like Roundup (glyphosate).

I laud GMO Inside for nudging companies to do better, and recognize that one brand can influence an entire industry. If Starbucks were to offer only organic milk in stores, other chain coffee shops (such as Dunkin Donuts, Caribou Coffee, Peets) may follow suit. Plus, more organic milk surging into the mainstream would mean reduced organic milk prices for a Venti Java Chip Frappuccino (which, by the way, is a 600 calorie, 88 gram sugar bomb—so if this is your morning pick-me-up, non-organic milk is the least of your problems).

But I doubt all 155,000+ people who sent letters to Starbucks urging the brand to carry organic milk really understand organic feed supply limitations. The Organic Trade Association found that sales of organic dairy grew just 8 percent in 2013—one of the smallest gains in the organic sector.

Can organic supply keep up with organic demand?

Organic demand is strong. And it’s thankfully growing. But is the organic supply sufficient? “Farmland in the United States is not being converted to organic at the pace needed to meet the growing demand for organic," says the Organic Trade Association. "Supplies of organic feed and organic grain have been tight and costly, which could limit growth especially in the organic dairy and meat sectors."

Even if Starbucks honored GMO Inside’s request to source only organic moo-juice, could they? Not at our current organic feed production and growth rate. In 2013, just 4.38 percent of total milk sales were organic, according to USDA data, up slightly from 4.09 percent in 2012.

Brands don’t have to passively wait for farmers to address organic need, as Nature’s Path demonstrated in May 2014 when the Canadian company bought 2,760 acres of organic farmland in northern Montana. “By purchasing fertile land and working with organic family farmers, we ensure the purity of our foods, increase organic acreage to sustain growth, prevent poisoning the environment, and provide for future generations,” said founder and CEO Arran Stephens.