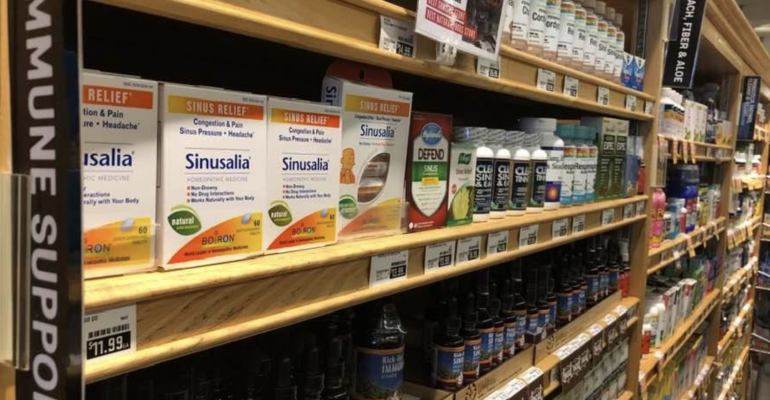 There is as of yet no cure for the COVID-19 coronavirus. But there remain natural bioactives—including, that's right, CBD—that can support immunity, and even address elements of colds and flu.

With the COVID-19 pandemic sweeping the globe, some industries and sectors are taking massive economic hits. One that is decidedly prospering? Dietary supplements, in particular immune-support supplements.

One data point: Eight out of the top 10 supplements selling on Amazon on March 11 were for immune support. Does the coronavirus have something to do with this?

Related: Secret Shopper: What supplements are best to boost immunity?

Health authorities say there is not as of yet any cure or treatment for the the virus that causes COVID-19.

Symptoms of COVID-19 (which stands for coronavirus disease 2019) can include fever, cough and breathing trouble. The virus itself is called SARS-CoV-2. Most people develop only mild symptoms. But some people, usually those with other medical complications, develop more severe symptoms, including pneumonia, which can be fatal.

While research supports the use of certain dietary supplements to maintain immune system health, no clinical research demonstrates using a supplement specifically to prevent or to treat the COVID-19 disease.

What’s more, because of the Dietary Supplement Health and Education Act (DSHEA) of 1994—the governing legislation around marketing and manufacturing supplements—even if research is conducted and published on the topic, DSHEA prohibits marketers of supplements in the U.S. from promoting any supplement product that makes disease prevention or treatment claims.

Indeed, the Food and Drug Administration sprung into action early in Marck to slap warning letters on seven companies selling supplements that were marketing products claiming to help against the coronavirus. That’s a no-no!

U.S. Sen. Richard Blumenthal (D-Conn.) followed up with a March 9 letter to the FDA and Federal Trade Commission saying warning letters are “are not enough” against the “scammers” and suggested the FTC should press charges and obtain refund checks for affected consumers.

However, the media has a First Amendment right to say things that marketers cannot. And we know there is well-established research demonstrating how supplements can play a role in supporting immune health. To be clear: There is currently nothing under the sun that has been shown to treat the new coronavirus, supplements or otherwise. But we can talk about some that support the body’s immune system, and a provocative mass of published research on supplements and natural bioactive ingredients specifically used on upper respiratory tract infections (URTIs), which is a fancy way of saying colds and flu.

Among 144 healthy individuals between 30 and 80 years old, the colostrum group had 13 episodes versus 14 in the colostrum plus flu vaccination group, 41 in the group with no flu vaccine, and 57 in subjects who were not treated with anything. Researchers suggested that cytokines in colostrum may stimulate production of protective antibodies that may allow protection against certain viruses.

Another colostrum study gave subjects 600 mg/day colostrum for eight weeks. Those on the colostrum experienced a significantly lesser number of upper respiratory tract infection symptoms—colds and flu are considered URTIs—though the duration of symptoms was the same in the colostrum and placebo groups.

The above colostrum researchers noted that, in many instances, flu starts from the intestinal tract. Convenient, because that’s the bull’s-eye of bacteria both onerous and beneficial.

One meta-analysis of 12 studies involving 3,720 participants of all ages found probiotics were better than placebo when measuring the number of episodes of acute upper respiratory tract infections (URTI) and the duration of a URTI.

The questions with the meta-analysis:  Which specific probiotic strains work? There are so many these days.

Perhaps the most popular strain, and certainly the most researched, is Lactobacillus GG, found in the Culturelle brand. One study using LGG on nursing home residents aged 65 and older found 10 billion CFUs of LGG daily for six months led to one-third fewer respiratory viral infections.

The original probiotic drink, Yakult (Lactobacillus casei Shirota), was studied among 96 men aged 30 to 49 years old. They drank either Yakult or a control milk daily for 12 weeks during the winter. The placebo group experienced 53 URTIs, versus only 22 for the Yakult group.

A normal serving size is one tablet. Researchers gave a loading dose of three tablets a day for the first month, then the one tablet a day for two more months. The probiotic group experienced a “marked decreasing of respiratory infections in almost all the reported cases,” according to the researchers.

The suspected reason is that the probiotics have a buffering effect on saliva. Salivary pH with values less than 7.0 usually indicates an increased susceptibility to oral and respiratory tract inflammation and conditions. While the placebo group hovered between 6.4 and 6.8 for the duration of the study, the probiotic group’s saliva pH rose from 6.4 at the start of the study to 7.5 after 90 days.

In observational studies, vitamin D deficiency is associated with increased risk of infections. In particular, those with larger deficiencies tend to have significantly longer and more severe URTI infections.

One study of studies found best results among those with blood levels of a paltry 10 ng/dl. The U.S. recommendation is a person needs more than 20 ng/dl—but that's just for bone health. Ask any holistic or integrative practitioner for overall health, including immune function, he or she will advise minimim vitamin D blood levels of 40 ng/dl, if not 60!

Vitamin D is fat-soluble, which means if you skip a few days of supplementation you can catch up by taking larger doses to tide yourself over a few days. But a meta-analysis of 11 placebo-controlled studies of 5,660 patients found that once-daily dosing was superior to large erratic “bolus” injection doses. Overall, though, the conclusion is that vitamin D does show a protective effect against URTIs.

Yet a study in China among infants found 1,200 IU/day significantly decreased the incidence and rapid relief from symptoms and disease recovery.

A study among elderly long-term care patients in Colorado found 100,000 IU a month reduced the incidence of URTIs.

Yet a different study also using 100,000 IU/month for 18 months found no difference.

Surely there’s a middle ground, no?

Researchers in New Zealand gave pregnant women at the start of their third trimester and their subsequent infants for the first six months of their lives either placebo/placebo, 400/1,000 IU, or 800/2,000 IU vitamin D per day. Only the higher doses of vitamin D led to a significant decrease in acute respiratory infections.

The upshot may be that certainly those with low vitamin D levels can benefit—and it may be that it’s not really the “colds and flu season” but rather the “vitamin D deficiency season.” When the seasons change and the sun is lower in the sky—and certainly anyone who works inside all day—that is the ideal time to start an aggressive vitamin D supplement regimen.

One observation about COVID-19 is that the body’s hyperreactivity to the virus is causing problems. So perhaps a supplement that spikes the immune response is not the way to go. Wellmune is a branded ingredient, a baker’s yeast beta-glucan, found in a number of foods, beverages and supplements. It seems to work not by jacking up the body’s immune response but rather priming it for improved efficiency. One study found Wellmune led to lower severity ratings for nasal discharge and sore throat as well as less days lost due to URTIs.

Another study on Wellmune, a double-blind, placebo-controlled, randomized clinical trial using 250 mg/day over 90 days among those ages 50 to 70 years old, found similar results. Wellmune reduced the number of URTIs and the number of symptom days.

The body’s immune system is the main barrier in preventing harmful pathogens from entering your body. An easy way to strengthen it is by looking at what you do every day and making some small lifestyle changes. In particular, the big three are washing hands, getting good sleep and keeping stress in check.

Studies show stressed-out people have a higher risk of subsequently developing a cold.

Other studies have found that stress increases the amount of time it takes the body to heal from wounds.

With sleep, one study found those sleeping more than seven hours a night were four times less likely to develop a cold than those getting less than six hours of sleep a night.

Hemp CBD may not be able to get people to wash their hands more often or better, but evidence suggests it could help people with sleep difficulties.

There are no direct studies yet on hemp CBD vis a vis immune function, but it does seem to help with contributing factors to keeping us healthy. A balanced life is a healthy life.

We asked our social media groups what immune builder people were taking. Here’s a selection of responses: