HomeNewsSmallest Whole Foods Market to debut
Recent
Latest
3 reasons natural retailers are inflation-friendly shopping destinations
May 25, 2022
Sponsored Content
Organic agriculture and its impact on ingredients and the planet – webinar
Sponsored Content
The goodness wrapped in a certified organic seal – video
Podcast: What brands need to get on shelf at Fresh Thyme Market
May 24, 2022
Trending
Getting ready for 2023: Trends for brands to consider
May 17, 2022
6 tips to promote consumer understanding of Certified Organic
May 18, 2022
The Planting Hope Company aims to prove gender equity leads to success
May 23, 2022
Natural beauty market trends
Jun 16, 2021
Natural Foods Merchandiser
brought to you by 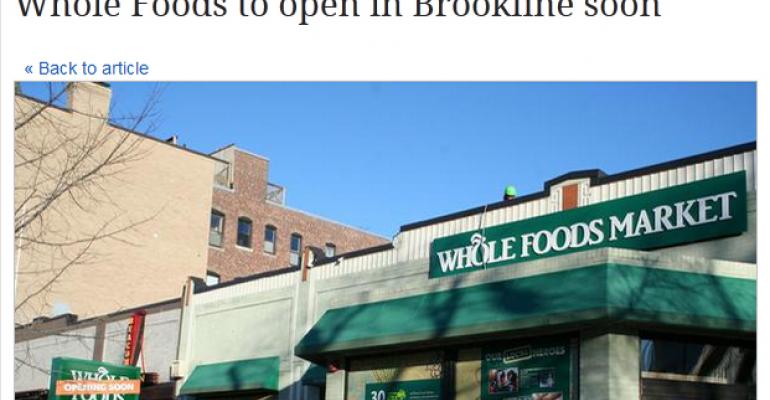 What may be the smallest Whole Foods Market is set to open in Brookline, Mass., this week.

This location could preview more of what’s to come for the natural chain that has focused in the last year on expanding into smaller markets with smaller stores.

Take a sneak peek with pictures posted at brookline.patch.com of the store that will highlight ready-to-eat convenience, employ 75 and stock 4,000 products with a focus on New England flavor and flair.

“We didn’t eliminate any entire department,” associate team leader David Lomonaco told the Boston Herald in an article that previews the store. “We squeezed them in.”

The Boston Business Journal reported last month about the state of the area’s grocery shakeup with Whole Foods taking on six leases from Johnnie’s closures, and Stop & Shop Supermarket Co. taking others.

Johnnie’s Foodmaster was a family-owned supermarket chain started in 1947 that toughed it out in a competitive grocery environment until last fall, when it announced the Whole Foods agreement, as reported by the Boston Globe.

John DeJesus, owner of Johnnie’s Foodmaster, said in a statement that the opportunity to sell the other six to Whole Foods “made a tough decision much easier.” He added, “The time was right to make this change for our company. I am confident that we have found the best partner that offers the most positive outcome, not only for our employees but for the communities as well.”