King Arthur Flour enjoys cult-like devotion from serious bakers, who are willing to pay a premium for a product whose correct protein content and tight quality specifications are valued for superior cakes, cookies and bread.

And while the company’s products are beloved, it’s the structure of the enterprise behind the flour and baking ingredients that made Co-CEO and CFO Ralph Carlton a featured speaker at the recently concluded Net Impact Week — a week of speakers and events focused on social impact sponsored by the University of Virginia Darden School of Business’ student-run Net Impact club.

Carlton, a former Goldman Sachs and Coca-Cola Co. executive who now serves as one of three CEOs of the 227-year-old Vermont-based company, described his experience leading a B Corp—a for-profit company that balances profits and purpose in a verified manner, meeting certain standards of social, environmental and ethical corporate action.

Related: New ways to think about liquidity for impact capitalism

Environmental, social and employee welfare considerations do not come after the financial considerations are made, Carlton said. Rather, they are given equal footing in all de 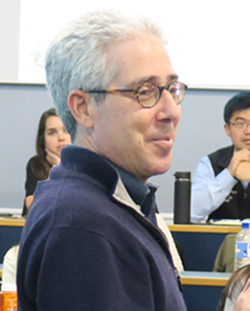 cisions and play a central role in the company’s strategic planning.

The Darden School is fertile ground for such considerations. In addition to a thriving Net Impact club, the School is home to leading scholars and teachers of stakeholder theory, and it was recently named the No. 1 MBA program in the world for corporate social responsibility in the 2019 Financial Times’ Global MBA ranking.

Carlton described the B Corp movement as in its early stages, with opportunity to expand beyond non-public companies and to continue to grow recognition of the B Corp brand. Still, Carlton said B Corps and their ilk have rising currency among young people, who are increasingly interested in who they are buying from, not just what they are buying, he said.

The B Corp designation is just one atypical aspect of the King Arthur Flour story, however. The company is entirely employee owned and has not one but three CEOs.

Insisting “three heads are better than one,” Carlton said the unusual leadership decision came about after the previous CEO stepped down and recommended shared leadership. Believing that a complementary set of skills existed within the company and reluctant to go outside the company for a new leader, the company’s board opted to elevate originally four, now three existing leaders to the top role.

Carlton said a critical element for the success of the unusual arrangement was that none of the three leaders nursed the ambition to be the sole CEO. He lauded the ability to hash out the thorniest problems with a team of equals.

“The dynamics are great,” Carlton said. “But we understand that it isn’t right for most companies.”

5 minutes with Emily Kanter on B Corp Certification
Feb 09, 2015