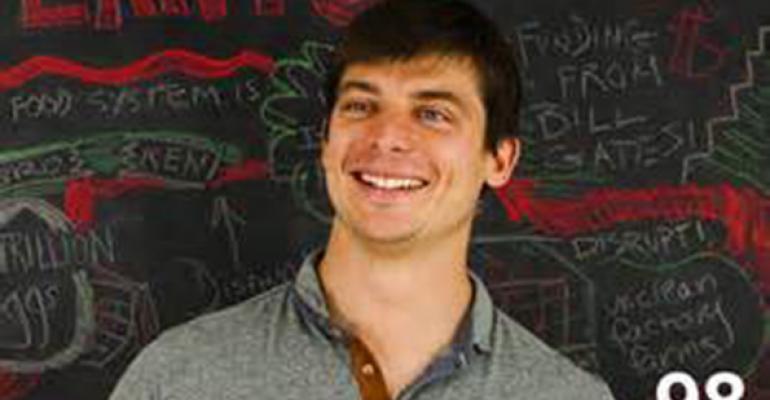 Then thereâ€™s Hampton Creek, the San Francisco food startup that has caught the attention of all of the above. Its egg-free Just Mayo product needed less than a year to go from concept to Whole Foods Marketâ€™s top-selling mayonnaise (and target of a panicked lawsuit, since dropped, from Unilever).

All told, 12 billionaires have invested in this company that, for now, sells only egg-free mayonnaise, cookie dough, and cookies. But the appeal for these investors isnâ€™t what the Hampton Creek does but how it does itâ€”the decidedly un-status-quo approach that earned the company NBJâ€™s Innovation Award.

â€œWe never wanted to approach this like a food company,â€ says Hampton Creek co-founder and CEO Josh Tetrick. â€œWe do happen to be making food. But we want more of a technology-driven approach, meaning disciplines that you wouldnâ€™t normally find in foodâ€”data, for example. Our head of data is a former head of data for Google Maps and YouTube. And thatâ€™s a reason some of our biochemists are here. We have an approach to product development that you wouldnâ€™t find at Nestle.â€

That approach took Hampton Creek from not even having a consumer product in the fall of 2013 to ending 2014 with its debut productâ€”the egg-free Just Mayoâ€”in more than 15,000 stores and distribution in Asia and Europe.

Tetrick is a lawyer by training who, after graduating from law school in 2008, headed to sub-Saharan Africa to work as a social entrepreneur but returned to the U.S. frustrated with his inability to make much of a difference.

â€œEverything that we tried to do was very standard and conventional,â€ he says. â€œThere were small changes here and there, but no big changes. I was frustrated by the fact that our approaches were not at the scale of the problems. Kids were still on the streets when I left, and people were still really poor. I was looking for an opportunity to really unleash and solve a big problem.â€

A vegetarian since college, Tetrick started having discussions with childhood friend Joshua Balk, a policy director at the Human Society, about the ethics and impact of the food industry.

â€œThe more we dug into it, the more we realized that 99 percent of what we eat around the world is bad for the body or the planet,â€ Tetrick says. Though neither he nor Balk had a background in creating food products, they decided to launch a tech-first attempt at upending conventional food wisdom. The strength of their idea was enough to secure $500,000 in seed funding from Vinod Khosla to get them started.

Tetrick says the pair hired a small team and initially tried to be a â€œfaster version of a Kraft or General Mills,â€ looking at existing ingredients and seeing if there was something new to be done. â€œIt took us about six months to realize thereâ€™s no way we could ever do what we wanted to do by approaching it that way,â€ he says.

So they settled on a multidisciplinary approach that would start by looking at plants and seeing if they could start creating their own ingredients.

â€œThere are about 400,000 plant species around the world, and about 92 percent havenâ€™t been analyzed in depth,â€ Tetrick says. The team would bring in plants, run experiments, and add the results to a database. As they started compiling more data, they began to see unexpected correlations between certain propertiesâ€”like the molecular weight or solubility of a particular substanceâ€”and how that substance functioned as an ingredient.

â€œFor example, when the molecular weight is between X and Y, thereâ€™s a 90 percent probability of it making a better muffin,â€ Tetrick says, â€œbecause the muffin rises.

â€œWe realized there are all these hidden relationships in the data that were unexpected. So we built a data team to help us identify them. Theyâ€™ve created these quantitative modeling techniques that help us screen a lot faster and a lot smarter.â€

From the start, the plan was to be an ingredient supplier, beginning with creating an egg substitute that Hampton Creek could sell to any manufacturer using eggs. Through its data crunching, the company had settled on the Canadian yellow pea as a solution. Where the ratio of energy input energy output for chicken eggs is about 39-to-1, Hampton Creekâ€™s pea-based egg substitute comes in at around 2-to-1.Â That makes it not only healthier and better for the environment but also cheaper, which lets the company compete not just on mission but also on price.

That caught the attention of a local San Francisco news station, whose March 2013 piece on Hampton Creek got featured by muckraking aggregation site the Drudge Report. And thatâ€™s when things got weird. Tetrick says that as a result of the story, people starting calling Whole Foods asking if they carried Hampton Creek productsâ€”so many that a representative from the company called Tetrick to get to the bottom of it.

â€œHe said, â€˜People keep saying that weâ€™re selling your product in retail, but I donâ€™t know anything about you,â€™â€ Tetrick recalls. â€œSo I told him about Hampton Creek, and he said that if we had a product, we should send it for them to take a look. We decided on mayo and sent them samples, and they selected it for national distribution.â€ At that point, a finished consumer product had been so far from the companyâ€™s business plan that Hampton Creek didnâ€™t even have a label design for a jar.

â€œWeâ€™ve since become the top-selling mayo in Whole Foods by a pretty wide margin,â€ Tetrick says. â€œAfter that it was boom: Kroger, Safeway, Costco, Dollar Tree, Walmart, Compass Group, which is the largest food-service company in the worldâ€”all in just a few months last year.â€

One big factor in the rapid adoption is the fact that Just Mayo is cheaper than conventional mayonnaise brands. People shopping for health, vegetarian, or environmental concerns have good reason to choose it, but so do those shopping on price.

â€œWeâ€™re not interested in being positioned as sort of a niche natural and organic product,â€ Tetrick says. â€œI love that weâ€™re in that category, for a lot of reasons. But weâ€™re trying to figure out a way where we can be attractive to someone who shops at a Rainbow Grocery or Whole Foods and also to the Walmart mom. A lot of power comes from this idea of the better thing also being more affordable and tasting better. Thatâ€™s how you move the needle.â€

The plan now is to become a food giantâ€”not another plant-based brand for the natural channel but a manufacturer on the scale of a General Mills or (ahem) Unilever that happens to be 100 percent plant based. To that end, Hampton Creek has expanded its data, biochemistry, and food-science teams, looking for new plants, new ingredients, and new products they can create from them. â€œWe want to make better foods across the spectrum,â€ Tetrick says, â€œwhether thatâ€™s mayo or cookies or scrambled eggs or pasta or doughnuts.â€

And with the companyâ€™s deep financial backing, Tetrick and Balk can stick with their broader goal of building a lasting company rather than angling for a big-money buyout.

â€œWeâ€™re trying for the moonshot, not the acquisition,â€ says Tetrick. â€œWe have a special opportunity to build something that has a much, much larger impact. My motivation is less about the moneyâ€”though thereâ€™s nothing wrong with thatâ€”than about how we increase the probability that we do a lot of good here. And I think that is more likely through being a permanent public company.â€

So how will Hampton Creek top its remarkable 2014 growth? In the Silicon Valley tradition of rapid, global-level scaling, the companyâ€™s rallying cry for 2015 is to reach 100 million people. Tetrick says that will require getting through 100,000 doors (stores, restaurants, cafeterias, etc.), versus the 15,000 the company got through in 2014.

â€œWhat does it look like to get regular people to eat better food? How do you make it so that 99 percent of people are eating food thatâ€™s good for them and the planet?â€ Tetrick asks.

â€œThat question right there spurs all the innovation we do. Thatâ€™s the problem weâ€™re working on.â€

The nutrition industry canâ€™t reach young people? Carter Kostler would disagree. He founded Define Bottle when he was just 13. Spurred by a concern over type 2 diabetes, Kostler invented a drink bottle that makes it easier for people to choose healthy, naturally flavored water instead of soda. His multi-chambered bottle, which now comes in four varieties, lets users create fruit- or herb-infused water on the go. Now a seasoned 16 years old, Carter has topped $1.5 million in sales and has been named to the Clinton Foundationâ€™s youth advisory board, the Alliance for a Healthier Generation.