Is non-GMO a threat to organic? 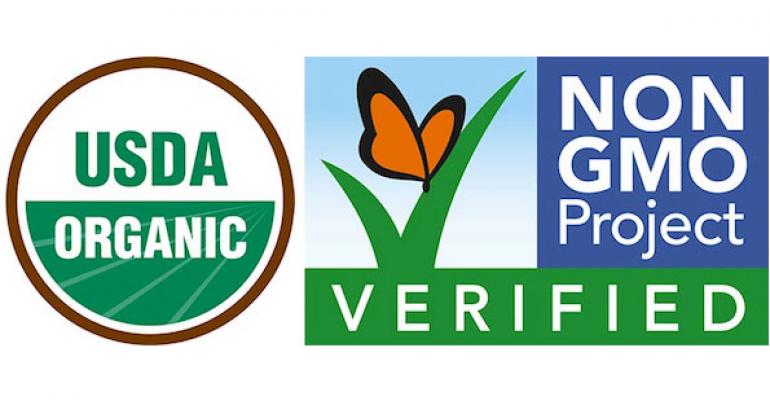 As the Non-GMO Project logo appears on more and more gro&shy;cery shelves, some mem&shy;bers of the organic food community express con&shy;cerns that non-GMO will hurt sales of organic foods. 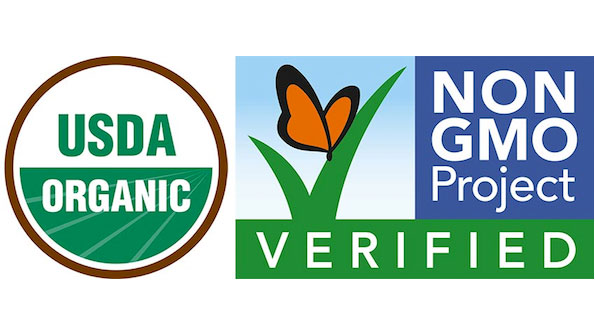 As the Non-GMO Project logo appears on more and more gro­cery shelves, some mem­bers of the organic food community express con­cerns that non-GMO will hurt sales of organic foods.

“The non-GMO label threatens the USDA Organic label,” says Greg Lickteig, direc­tor, The Scoular Company, which sells organic and non-GMO grains. “Given two prod­ucts on the grocery store shelf, one being non-GMO and the other organic, the non-GMO prod­uct will most cer­tainly be less expensive.”

Rakesh Raniga, president, Indianlife Foods, which sells both organic and Non-GMO Project ver­i­fied products, agrees. “Non-GMO verified products will be less costly, there­fore some con­sumers may choose them over organic.”

Lynn Clarkson, president of Clarkson Grain, a sup­plier of organic and non-GMO grains, also sees non-GMO competing with organic. “Yes, I think that a non-GMO label will com­pete with the USDA organic label for buyers’ food dollars,” he says. “I do not have a sense of how much damage it will do. The best way to avoid GMOs is to buy foods graced with the USDA organic label.”

However, he also says that a non-GMO label could be a stepping stone to more organic demand. “If inter­est in a non-GMO label sensitizes buyers to the consequences of farmers widely using pesticides and synthetic fertilizers, such devel­op­ment might actually increase demand for certified organic foods.”

The Organic Trade Association hasn’t looked at any possible impact of the Non-GMO Project on organic, says Laura Batcha, executive vice pres­i­dent of the Organic Trade Association. However, she says OTA surveys show increas­ing aware­ness and concern about GMOs among organic consumers. “The num­ber of par­ents that cite avoiding GMOs as a rea­son to eat organics rose to 22%, up from 17% in 2011,” Batcha says. “We take that as a positive indication that consumers see GMOs as a core reason to purchase organic.”

Jim Riddle, coordinator, graduate student organic research grant program at the Ceres Trust and for­mer chair of the National Organic Standards Board, doesn’t see a con­flict between non-GMO ver­i­fied and organic. “Many of those (non-GMO) claims appear on organic prod­ucts, and they are com­pat­i­ble with organic prod­ucts and mes­sag­ing,” he says.

Furthermore Riddle says “Both mandatory GMO labels and voluntary non-GMO labels will force organic producers and marketers to up their game and describe how their production systems have been shown to pro­tect soil health and water quality; prevent pesticide contamination; and build biodiversity better than non-organic systems.”

As Riddle points out, many organic products also feature the Non-GMO Project ver­i­fied seal. According to Megan Westgate, Non-GMO Project executive director, more than half of the Project’s 9,000 verified products are organic. Also, lead­ing organic food companies such as Eden Foods, Nature’s Path, and Lundberg Family Farms have been strong sup­port­ers of the Non-GMO Project since its founding.

Westgate says both labels are needed to help con­sumers avoid GMOs. “We are com­mit­ted to helping peo­ple under­stand the respective values of certified organic and Non-GMO Project verified, and we reg­u­larly encour­age peo­ple to seek out both labels as the gold standard,” she says.

Ken Whitman, pres­i­dent of Natural Vitality [and pub­lisher of Organic Connections], which sells organic sup­ple­ments that are also Non-GMO Project ver­i­fied, says the non-GMO label is needed. “All food isn’t organic, and in the absence of GMO label­ing there needs to be a way shop­pers can be assured that the prod­ucts they are buy­ing are not genet­i­cally mod­i­fied. The Non-GMO Project has filled that need,” he says.

Is there room for both labels?

Several organic indus­try experts say that edu­cated organic con­sumers would already know that organic is one of their best options to avoid GMOs since the National Organic Program rules con­sider genetic engi­neer­ing an “excluded method.”

“The true organic dis­ci­ple will under­stand that ‘organic’ has to be non-GMO,” says Steve Ford, pres­i­dent of Stonebridge, Ltd., a sup­plier of non-GMO and organic soybeans.

“When it comes to label­ing non-GMO prod­ucts it must be under­stood that if you’re certitied organic then you’re non-GMO,” says Randal Buresh, pres­i­dent of Oregon’s Wild Harvest. “The Non-GMO Project may help spread the word about organic farming, helping to clarify what being organic is all about.”

Brendan McEntee, pres­i­dent of Cook Natural Products (also not a Non-GMO Project com­pany), agrees. “For the informed organic con­sumer there will not be any con­fu­sion about organic not being non-GMO.” Though he also says “Certain organic products may lose mar­ket share to cer­ti­fied non-GMO.”

Whitman con­curs. “I don’t think we need a turf war between organic and non-GMO. It wouldn’t be pro­duc­tive. GMO is unpopular with health-conscious shop­pers. Organic is pop­u­lar. Can’t we just get along?”