HomeProducts and TrendsFood and BeverageMyth busting at Natural Products Expo West: How organic can feed the world
Recent
Latest
4 tips to get ahead of chemical concerns in packaging
May 20, 2022
7 CBD favorites in the increasingly popular gummies format
May 20, 2022
Mission MightyMe helps parents introduce allergens to babies
May 20, 2022
UNFI's Eric Dorne to step down as chief operating officer
May 20, 2022
Trending
Whole Foods' honors 30 companies with 10th annual Supplier Awards
May 18, 2022
Sponsored Content
The rise of sustainable business – eGuide
Sponsored Content
Getting ready for 2023: Trends for brands to consider
May 17, 2022
Sponsored Content
Unboxed: 7 plant-forward ice creams to stock this summer
May 10, 2022

Myth busting at Natural Products Expo West: How organic can feed the world 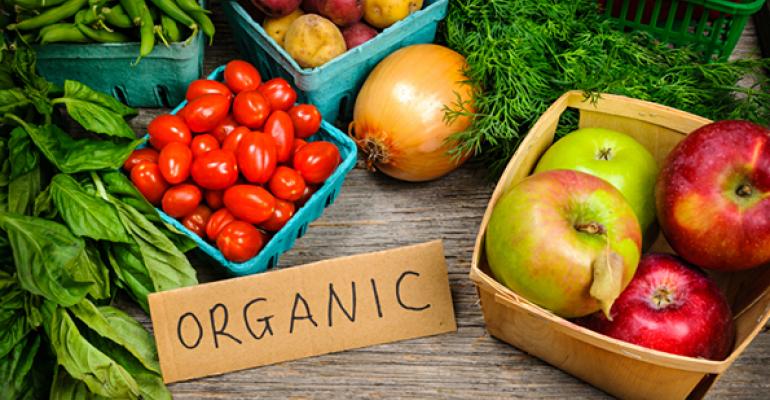 I have to admit that I’ve fallen for all of the myths that the Organic Myth Busting: How Organic Can Feed the World panelists discussed at Natural Products Expo West. I thought organic was too expensive for the mainstream consumer, and I had no idea how organic could feed the world. The Expo West session was a not-to-be-missed myth-busting hour featuring organic industry leaders. Here are some key myths and the facts to bust them.

According to organic farmer Bob Quinn, industrialized agriculture makes up only about one-third of farming worldwide. Meanwhile small and local farmers provide most of the food in China and Africa, the countries that comprise most of the earth’s population. These smaller, less-industrialized farms can reap a three-fold production increase by going organic.

Arjan Stephens from Nature’s Path noted that the large biotech companies are telling us that we need pesticides and tech to feed the world. He talked about the Rodale Institute in Pennsylvania, and its side-by-side trials of conventional and organic agricultural methods. In non-drought years, yields were the same and in drought years organic beat conventional agriculture in a significant way. However, during transitional periods, yields might be less.

The panelists noted that some things are more difficult for organic farmers. Produce crops are more difficult to harvest over cereal crops. With produce crops you have pests and pest management on top of weed management. Soil building is also a timely process, but necessary to create fertile soil year after year—and to leave the ground the same or better than it was found, a tenant of organic.

Stephens was quick to mention that production isn’t the biggest issue. Rather, food system issues such as food waste and distribution need to be solved, even among organic businesses.

Myth: Organic businesses are stagnant and not growing.

According to New Hope Network, “Organic Monitor estimates the global market for organic food in 2014 to have reached $80 billion. The market has been steadily increasing from its $15.2 billion in 1999.” New Hope also writes, “The Organic Trade Association forecasts that by 2030 organic sales in the U.S. will total $90 billion annually, with organic food representing 10 percent of all food consumed.” If you ever doubt that organic business is not growing, feel free to visit a Costco, Target or Walmart. Check out Target’s “Made to Matter” initiative for natural and organic products. Costco took the national lead for organic sales over Whole Foods, and Walmart isn’t far behind. Also, check out the State of the Natural Product Industry webcast to find out where organic and natural is today—with organic growing more than natural sales in 2015.

Demand for organic greatly outstrips the supply. The Organic Trade Association helps farmers transition from conventional to organic farming methods, which leads us to our next myth.

Myth: It’s difficult for farms to transition to organic production.

It does take effort to transition to organic farming, so it’s not necessarily a myth, but there are ways to make it easier, including:

While myths may claim the volume difference is just too big of an obstacle to overcome, studies say this just isn’t true. While organic farmers pay more in fuel and labor, the margins are greater for organic. Looking at profits, organic farming breaks even with or better than conventional, depending on geographic location. While the initial yields are lower during transition, farmers should consider numbers over years and long-term, not the first year in organic farming.

Myth: Organic is too expensive for consumers.

I did have my doubts about this myth, and apparently so do Celiac and the Beast readers. When I posed this question to my followers, the response was a bit disheartening. Some could barely afford gluten-free food, much less organic gluten-free food. However, I did speak with the Organic Trade Association who passed along a link to how to survive on organic for $25 a day (for a family of four). Tips included, buying in bulk, couponing, visiting farmers markets and menu planning.

Nature’s Path has a different take. Leadership decided to accept a lower gross margin to invest in affordable pricing for consumers. “We want to be a trusted name in organic in every person’s home,” Stephens said.

I believe that this myth is the one that is the most prevalent in consumers’ minds. Only time and the growth of the organic market can show if the price tag is too much to bear, or what consumers are willing to sacrifice to make organic a priority purchase.

By the end of the session, I was rooting for the organic farmers. At the end of the hour, I believed that perhaps, if we try hard enough, organic can actually feed the world.