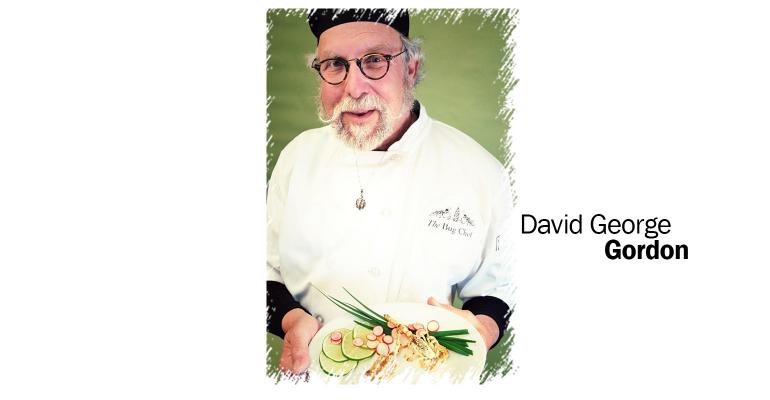 David George Gordon is a Seattle-based chef, restaurant consultant and author of the The Eat-a-Bug Cookbook (1998, Random House), a catalog of 40 recipes for cooking with everything from termites to tarantulas.

A longtime proponent of bug eating as a delicious and sustainable practice, Gordon keeps busy with a number of high-profile promotional events and gala dinners, including running a bug food truck at the San Diego ComicCon and managing a $15,000 insect catering budget for the Explorers’ Club annual dinner.

“Without being boastful,” he says, “I’ve probably cooked bugs for more people than anyone on our planet.”

How are restaurants employing edible insects these days, and where are they purchasing them?

David George Gordon: I worked with one up in Vancouver, British Columbia, called Vij’s, which, according to The New York Times, is one of the best Indian restaurants in the world. They added a cricket flatbread to their menu, mostly because of the environmental benefits.

One of the most obtainable options is wild-harvested, seasoned grasshoppers from Oaxaca called chapulines. And you can just buy those by the sackful at a Mexican market. I’ve seen The Black Ant in New York serve chapulines in some of their empanadas. There’s a place here in Seattle called Poquitos where you can order chapulines as an appetizer. And they’re quite tasty. Not that hard of a sell job. They go great with beer because they’re spicy.

Then when I see people try to do something special, whether it’s a pop-up restaurant or event or new dish, most of them go with crickets or mealworms. Crickets and mealworms are the most abundant. You can order them online and receive thousands of them. You can order crickets direct from the farms or through larger distributors like Petco or PetSmart. You can specify size as well. I specifically like 5-week-old cricket nymphs because they don’t have their wings yet. With adult crickets, their wings are like eating cellophane.

There’s a company called Thailand Unique that sells everything from palm weevil grubs to dried scorpions to locusts. You can also buy black ants in a can. They’re really nice as a seasoning on salads. There’s even a catalog company here in Seattle called Marx Foods that sells about 10 different insects online.

I’m working with a company right now called Jimini’s. It’s located in Paris and takes locusts raised commercially in the Netherlands, dries and seasons them, and sells them in little packages as snacks.

DGG: Street foods and food trucks. In Southeast Asia, if you’re eating bugs it’s not at an elegant, sit-down dinner. They’re snacks and you buy them from vendors. Same with chapulines.

I went to a conference on edible insects in Detroit last year that featured fancy bug cuisine at $80 a plate. This is great, but for me, I’m much more interested in normalizing bugs. So rather than going with this big elegant approach, although I’ve certainly done that, I like the idea of people being able to get simple fare like they would in countries that actually eat bugs. Our approach is almost too Victorian.

It seems that many edible insects are imported to the U.S. Can we create street food prices for bugs with that markup?

DGG: There are some real stumbling blocks: one of which is that question of scale. If you buy cricket flour it’s expensive. Most of the growers are small companies with limited distribution networks—we’re not talking General Mills here. I can think of one in Austin, Texas, called Espire. They raise organic crickets and make cricket flour. There’s a larger one I like called Entomo Farms in Canada. They’ve been converting poultry barns to cricket production and raise thousands of pounds of crickets on a monthly basis.

For live crickets and mealworms, I wonder if at this point production is exceeding demand. Those are more affordable. But say for the Explorer’s Club banquet, I made 250 tempura-battered tarantulas. The tarantulas themselves are $10 to $15 apiece. At that price you should be buying Dungeness crab.

Another problem is that we haven’t really gotten into selective breeding yet: this spider grows bigger than that one, this cricket variety has more fat. The crickets you’re buying now are the same ones people were raising 70 years ago for pet food.

Any advice for chefs or entrepreneurs wanting to jump into edible insects?

DGG: If you look at the seafood industry, there’s the whole idea of renaming things. The orange roughy, for example, used to be the Patagonian toothfish. The name mealworm or waxworm does not make me want to eat it. The word worm comes from the same root as the word vermin. But the scientific name of the waxworm is Galleria. If you told someone, “We’re having Galleria today,” they might get more excited.

Also concealing bugs in a dish seems like an admission of defeat. There’s a sushi restaurant in Portland, Oregon, that sells grasshopper sushi and they have a deal where you can get your photo taken eating it. That makes it into a more fun and visible thing. I’m not going to say people can’t benefit from the shock value and novelty—they probably can and should.

Cooking up change with compassion, collaboration and sustainable food
Mar 07, 2016