Vital Farms pushes for animal welfare in the pasture and beyond 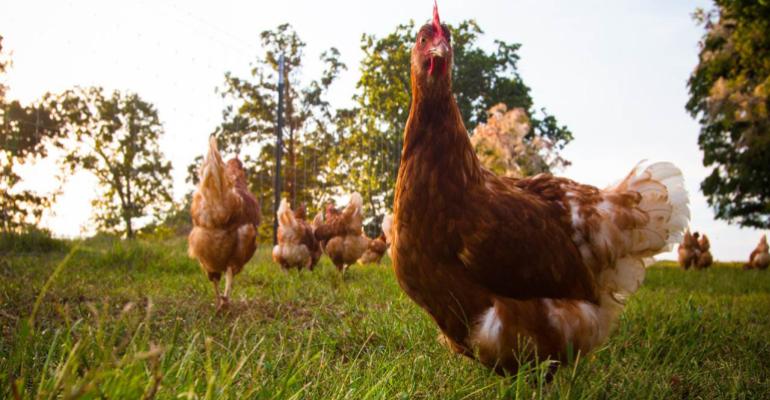 The egg company is investing in a technology that it hopes can save male chicks from being killed and also introduce previously wasted eggs into the food system.

Matt O’Hayer, the founder of pasture-raised egg purveyor Vital Farms, is on what he calls a bit of personal crusade. The goal? To transform some of the egg industry’s brutal practices into ones that are more environmentally and ethically responsible.

O’Hayer and his wife, Catherine Stewart, started Vital Farms in 2007. With the help of a hundred other family-owned farms from California to Georgia, the company now distributes pasture-raised eggs to stores nationwide. But in its new venture, the company hopes to put an end to the behind-the-scenes practice of male chick culling. Each year in the U.S., millions of male chicks are slaughtered after they’re hatched, because they are of no use for producing eggs and aren’t bred to put on weight to be sold as meat. The egg industry has recognized this as a problem, and there are a handful of groups working on solutions.

In a partnership with Israeli tech company Novatrans, Vital Farms is hoping to commercialize a new technology called TeraEgg that would detect gender and fertility in eggs before incubation. New Hope talked to O'Hayer to learn more about this and other ways Vital Farms is working toward more humane treatment in the egg industry.

Can you explain a little about the process of male chick culling, and why it's done?

Matt O’Hayer: In order for a lay hen to come into existence, there are breeder farms. These breeder farms look a lot like a cage-free farm, except that for every 10 hens there’s one rooster. That rooster’s job is to take the eggs that are in the hens’ oviduct and turn them into fertile eggs. Those eggs are gathered and taken to the hatchery and put in an incubator, and 21 days later little baby chicks hatch out.

About half of those baby chicks are male, and half are female. The problem is that this species is not really edible. They’ve been bred over time to produce lots of eggs and to not gain much weight because it doesn’t do them any good. So, when the males are hatched out, they are killed. There are a variety of ways it’s done, but one of the ways is they grind them up. Other places throw them in a trash can with a liner in it and they suffocate on top of each other, and when it’s full they put a zip lock on it and throw it in the dumpster. Some places squish them. There are lots of different ways of doing it and none of them are pleasant.

So how did you get involved in coming up with a technology solution?

MO: I became aware of this problem after I started my first farm. A couple of guys from PETA were at a retreat that I was at … and they told me about male culling, and I was really shocked. I kind of began a little personal crusade to find a way to overcome this situation. At first I thought, let’s find a home for the males—maybe poor countries could adopt these chicks and find a way to use them in food after they’ve grown up. That led to trips down to Central America and a lot of work with nonprofits and NGOs, but it was a dead end street. So then we started down the pathway of, maybe there’s a way to do this by determining [gender] in the shell before the egg is hatched.

That begs the old question, when is a life a life, and is there a pain threshold? More research yielded the fact that about halfway through incubation—10 and a half days—there is a pain threshold. So the question became, can we get it done before then, and is there a way to do it with kind of a litmus test as opposed to x-raying an egg or taking DNA off of it to find out earlier? Through this investigation, we came upon several university studies that indicate there is a way to be able to tell [gender] organically before incubation was even started. There are different characteristics in males and females after insemination, even before there’s any biological formation—so the egg at that point could actually be sellable.

There was a company in Israel that said, we think we can take this theory and turn it into fact, but we want to partner with someone who wants to invest in funding that. We did a lot of due diligence and

decided that this was the best technology out there. We went over to Israel, did some more research and then decided to fund the study. The results of that study are positive, so we’re moving forward to the next stage, which is commercialization of that technology, and we hope to have within a year or so a viable piece of commercialized technology that will allow hatcheries to tell whether an egg is male or female before it’s even set in the incubator.

How does this method work?

MO: We look at the egg through our noninvasive technology, so we’re not going to crack the egg open or drill a hole in it. Using our technology, we’re able to tell whether it’s male or female, and fertile or infertile. And so, if it’s male or infertile, those eggs can be diverted immediately either to a breaker plant as a liquid egg product or can be actually sold as cage-free. We’re talking about 7 billion eggs possibly back in the food system that are currently 100 percent food waste. Unlike the movement to cage-free, which has been purely from an animal welfare standpoint, there’s an economic component here on the part of the hatcheries.

Tell me about this spinoff company you formed, Ovabrite, and what the next step is. Is it a different team working on this?

MO: It’s a different team; I’m still working with both. We’re going into the beta stage which still isn’t commercialization—it’s still more science and engineering at this point—so that’s going to be another year. But because of the financial imperative, this technology won’t need a lot of a push on the sales and marketing side. It’s really all about getting the technology affordable and out there, and there’s no question that everyone will have to acquire it.

As a company, the other issue that’s out there is what happens when hens are too old to lay profitably anymore—what can we do at that point? We have a project trying to develop new best practices for Vital Farms hens on how we handle that. We’ve embarked on “Project Golden Girl” and are spending additional company funds on trying to find a humane way to deal with that. Is it bird sanctuaries? It is humane euthanasia?  We’re looking at all the practices out there trying to find what’s best.

Looking at the success of Vital Farms, do you think it’s possible—or likely—that eventually pasture-raised will become the standard for eggs, like cage-free has become now?

MO: I look at this thing as moving in stages. The first stage is, people are finally aware enough to realize there are cages, so the movement to cage-free happened so fast. In less than a year, the top 25 grocery stores in the entire United States moved to a full commitment to cage-free.

Coincidentally, two and a half years ago we did a study. We hired a firm to do surveys for us, and one of the questions asked was, when you think of the term cage-free, what kind of agricultural system do you think is taking place? And something like 82 percent described pasture raising to a T. So it goes back to education.

I think the success of Vital Farms is a testament to that fact. We’ve enjoyed some fairly good growth, but it’s because customers, number one, are aware of the animal welfare differential, because we educate them all the time—that’s our biggest job, I think. And number two, there’s a great coincidence in all of this which is that the eggs taste much better. That drives a lot of our restaurant and foodservice business and a big portion of our retail grocery business. Consumers want an egg that tastes delicious and is not just cheap.

Natural Grocers lays down a new standard for eggs
Oct 27, 2016