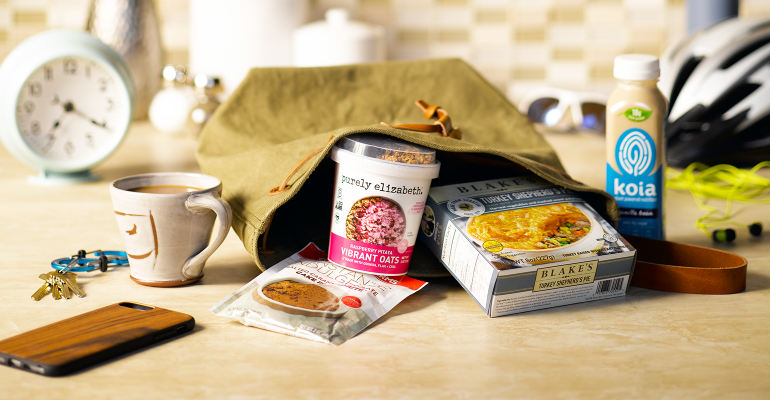 The grab-and-go sections of both conventional and natural retail stores are exploding. Here are the many ways in which convenience rules.

“A swell dinner ready in just 25 minutes—and talk about easy!”

With the exception of the tell-tale vintage adjective “swell,” this exclamation could appear in a modern-day advertisement—one touting the virtues of Lean Cuisine or even of a trendy meal delivery service like Blue Apron. But boomer readers might recognize this quote from a 1950s-era commercial for Swanson TV dinners, a product often dubbed the original convenience food.

When TV dinners first launched in 1953, they were a revelation. No more did eating a complete meal (including dessert!) mean cooking everything from scratch. All it took to prepare the meal was preheating the oven, waiting 25 minutes and sitting in front of the television. But while Swanson might have launched the convenience trend, such products wouldn’t fly with today’s consumers. They take too long.

Convenience is arguably the most impactful trend in the food industry. Research shows that consumers have less time to cook, more food manufacturers are formulating products designed to be prepared quickly (we’re talking 30 seconds to 2 minutes) and, the largest indicator, grab-and-go sections of both conventional and natural retail stores are exploding.

Our research in the 2018 Market Overview found that many retailers are expanding their grab-and-go offerings, such as adding new open and refrigerated cases that allow easy access to fresh beverages, take-along prepared foods and mini-meals like yogurt, overnight oats and ready-to-drink soup.

Plus, several standout categories have performed particularly well in the grab-and-go sections of grocery stores over the last year. According to SPINS, in the 52 weeks ending April 22, sales of refrigerated juices and functional beverages grew a strong 7.1 percent to $1.6 billion across all channels. While shelf-stable functional beverages grew only 2.5 percent, this category reached a massive
$2.3 billion during the same time period.

From these promising statistics, we’re able to discern that convenience foods in increasingly greater numbers are finding their way into consumers’ baskets across the store—not just at checkout or by the hot bars.

One area of grocery that has started to reawaken after a long period of numb growth is the frozen category. According to Euromonitor, after years of decline, in 2017 sales of frozen meals increased 1.5 percent; Nielsen estimates that sales of frozen veggies grew 4.5 percent in the 52 weeks ending March 31.

Part of the renewed zeal for frozen, suggests Serafina Palandech, president of frozen food company Hip Chick Farms, may be because shoppers—especially working parents—need something to eat that is easy to prepare, but without the additives, excess salt and artificial ingredients that typically come with “fast” food. “What we’ve seen is that our consumers are either busy moms with a million things going on who need to feed their kids nutritious food (that doesn’t take five hours to cook), or millennials and GenXers who are in love with the idea of meal box subscriptions and grew up with frozen dinners, and who are true foodies—but have not been able to connect these three elements,” says Palandech.

Brand innovation drives natural frozen sales. Whereas the Swanson TV dinner barely looked like the picture on the front of the package after it was cooked (one baby boomer we interviewed described the TV dinners he ate as a kid as “gluey”), the most successful frozen products today seem like they could have been made in a home kitchen. The ingredients are simple, flavorful, consciously sourced and chef-designed for unparalleled deliciousness. In Hip Chick’s case, all frozen products made by the company were formulated by co-founder chef Jen Johnson, who earned her cooking chops while working at Alice Waters’ famous farm-to-table restaurant Chez Panisse in Berkeley, California before launching Hip Chick Farms with Palandech. “I think Hip Chick Farms allows shoppers to have the efficiency and quickness of a frozen meal while still being able to eat ‘real food’ that’s nutritious and ethical,” says Palandech.

We’ve said it before, and we’ll say it again: Packaged convenience foods will continue to drive sales in your store. The following new products display exciting creativity that will allow your shoppers to embrace convenience throughout their entire day.

Beverages are the ultimate on-the-go product. These satisfying options offer ample nutrition, and make good proxies for an energizing breakfast. 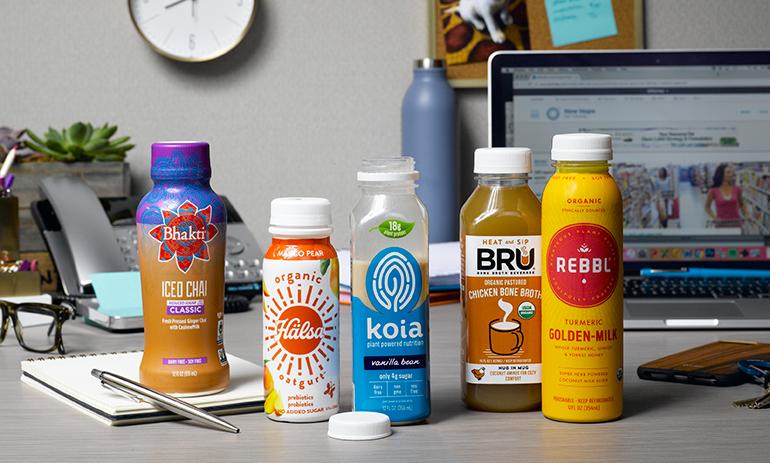 Koia Vanilla Bean
The founder of Koia was frustrated that most dairy-free protein drinks had high levels of sugar and a chalky taste. That’s why this vanilla-tinged beverage from Koia features three different kinds of vegan protein (brown rice, pea and hemp) to achieve 18 grams of protein, and just 4 grams of sugar—a feat achieved by blending organic cane sugar with zero-calorie monk fruit extract. And chicory root fiber boosts the fiber content to an impressive 7 grams. SRP: $3.99

REBBL Turmeric Golden-Milk Coconut Milk Elixir
REBBL added this silky new flavor to its existing line of superb, dairy-free beverages. At 150 calories and 8 grams of fat per bottle, this satiating USDA Organic drink contains a coconut milk base, honey, turmeric, ginger, vanilla, cardamom and spicy black pepper, which actually improves the absorption of curcumin from the turmeric. As with all of REBBL’s products, ingredients are sourced from suppliers that lift their communities from poverty. SRP: $3.99

These products are either ready-to-eat or require minimal preparation (such as adding water or popping into the microwave). 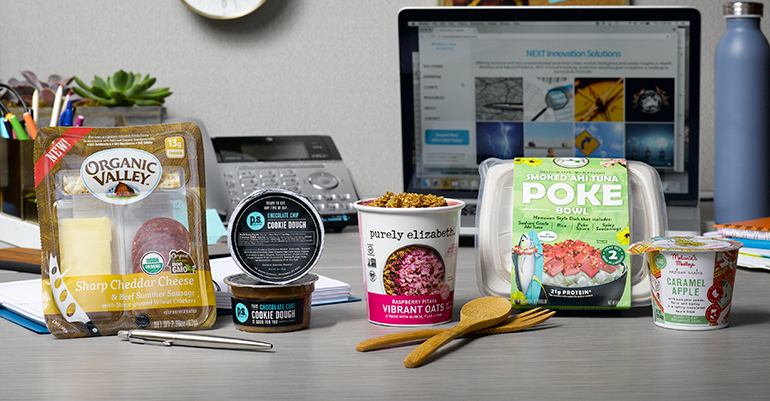 Organic Valley Sharp Cheddar Cheese & Beef Summer Sausage
Does this take-along container of cheese, sausage and crackers remind you of anything from your childhood lunch table days? We regard this snack pack as a grown-up version of a Lunchable. But instead of artificial ingredients, this USDA Organic pouch contains sharp cheddar cheese, nitrate-free summer sausage made from organic beef and rustic stone-ground wheat crackers. SRP: $4.99

P.S. Snacks Chocolate Chip Cookie Dough
With 5 grams of protein, 3 grams of fiber and 200 calories, this ready-to-eat refrigerated snack could be a nutrition bar swap. Garbanzo beans are the first ingredient, followed by almonds, organic chocolate chips, cane sugar, coconut oil, vanilla extract and more. The texture is akin to raw, chocolate chip cookie dough, which usually feels naughty to eat with directly with a spoon. P.S. Snacks gives your shoppers permission to dig in. SRP: $2.69

Melanie’s Medleys Ready-To-Eat- Breakfast Bowl Caramel Apple
A ready-to-eat breakfast bowl that contains a filling, nutritious blend of grains, nuts, fruits and nondairy milk, these refrigerated little cups contain 210 filling calories. Who knew that farro, pearled barley, apple juice concentrate, pumpkin seeds and more could taste like a candied, caramel apple? Who knew you could have something so dessert-y for a morning meal? Each cup delivers 5 grams of protein and 7 grams of sugars. SRP: $2.79 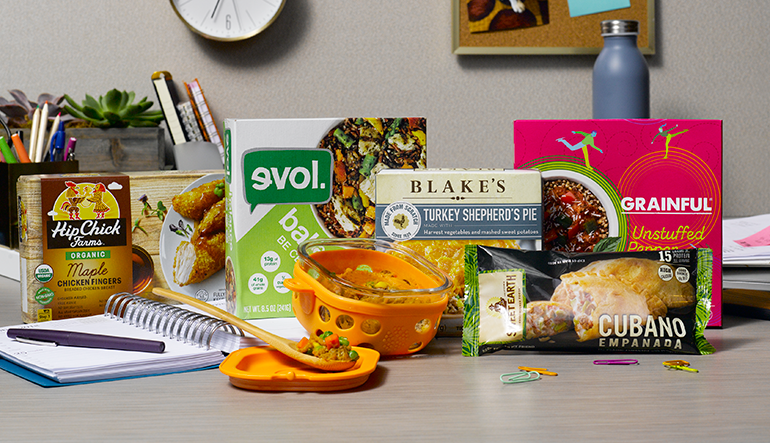 Hip Chick Farms Organic Maple Chicken Fingers
The chef and co-founder responsible for these USDA Organic, maple sugar-infused chicken fingers spent years working at Berkeley’s Chez Panisse—the restaurant often credited with sparking the slow food movement. Every ingredient in this product is responsibly sourced. The chicken comes from organic farms that are Global Animal Partnership Step 3 Certified, which means hens have enhanced outdoor access. And there are never any preservatives, fillers or stabilizers in the chicken fingers. SRP: $7.99

Blake’s Turkey Shepherd’s Pie
It’s rare to find a frozen shepherd’s pie that actually tastes homemade. It’s even rarer to find one that is both gluten free and milk free. But Blake’s is different. Made with a mashed sweet potato “crust,” inside you’ll find ground turkey, peas, carrots and organic corn in a mushroom and turkey broth. Why does it taste so good? The company says it uses a fourth-generation recipe to craft this meal developed by a grandmother. SRP: $3.69

Sweet Earth Natural Foods Cubano Empanada
This satiating handheld frozen meal features a highly flavorful and unique blend of classic cubano flavors, which include pickles, Swiss cheese, mustard and pork. As Sweet Earth is a vegetarian company, it has smartly replaced the pork with its signature Harmless Ham—a convincing meat replacement made with seitan and spiced with onions, hickory smoke, garlic and maple syrup. The empanada shape makes for a convenient, mess-free lunch. SRP: $2.79

Grainful Unstuffed Pepper
Made with whole-food ingredients that you would find in your kitchen, Grainful stands out by incorporating a traditional breakfast staple—oats—into savory meals designed for lunch or dinner. This “Unstuffed Pepper” features a flavorful blend of stewed tomatoes, red and green bell peppers and ground turkey atop a bed of tender oat groats, sorghum and red quinoa. Cooked, this bowl looks exactly like it does on the front of the package. SRP: $4.99

With these better-for-you, quick-to-make noshes, bowing to 3 p.m. sweet cravings needn’t be a food failure. 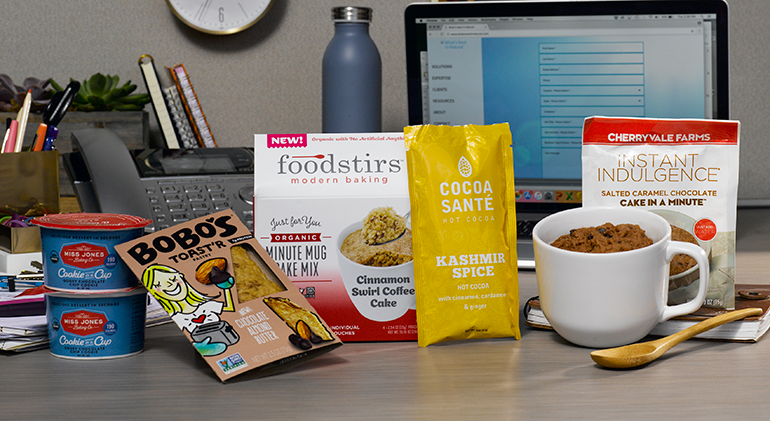 Packaged in an adorable miniature cup, this USDA Organic cookie mix makes a warm, teensy dessert in seconds (30 to be exact). When a sweet craving strikes, stir in a teaspoon of water and 1 ½ teaspoons of oil into the mixture; microwave on high and then enjoy—shoppers will love the perfectly proportioned size. Pro tip: Try adding in a scoop of vanilla coconut milk-based ice cream while the cookie is still warm. SRP: $1.99-2.49

Bobo’s Toast’r Pastry Chocolate Almond Butter
Perfect for hectic mornings where even scrambling an egg is off the table, Bobo’s version of a classic toaster pastry features worthy ingredients such as rolled oats, garbanzo bean flour, buckwheat groats and more. This version contains a creamy filling made from almond butter and melted chocolate chips for a luscious treat. Place in the toaster and wait for it to “pop.” Also perfect for a mid-afternoon snack. SRP: $2.99

Foodstirs Organic Minute Mug Cake Mix Cinnamon Swirl Coffee Cake
Mug cakes are all the rage on social media sites like Instagram and Pinterest, and Foodstirs taps into the trend with these individually packaged pouches ideal for throwing into a work bag. Consciously sourced, USDA Organic ingredients are a differentiator, too. The brand uses Demeter Certified Biodynamic cane sugar and identity preserved wheat flour. This Cinnamon Swirl Coffee Cake is perfect with an afternoon cuppa. SRP: $5.99

Cocoa Sante Hot Cocoa Kashmir Spice
A unique flavor blend differentiates this luscious hot cocoa. Made with organic cane sugar and organic cocoa sourced from small cooperative farms in the Dominican Republic and South America, each packet of instant cocoa is made by stirring into a cup of hot water—nonfat milk powder is already in the product mix, negating the need to add milk. This flavor is inspired by the flavors of Kehwah, an aromatic tea from Kashmir, and contains cinnamon, ginger, cardamom, clove and allspice. SRP: $1.95 per packet

How can retail foodservice compete with fast-casual restaurants?
Jun 06, 2018

Retailer roundtable: What grab-and-go items move most at your store today?
Jun 27, 2017