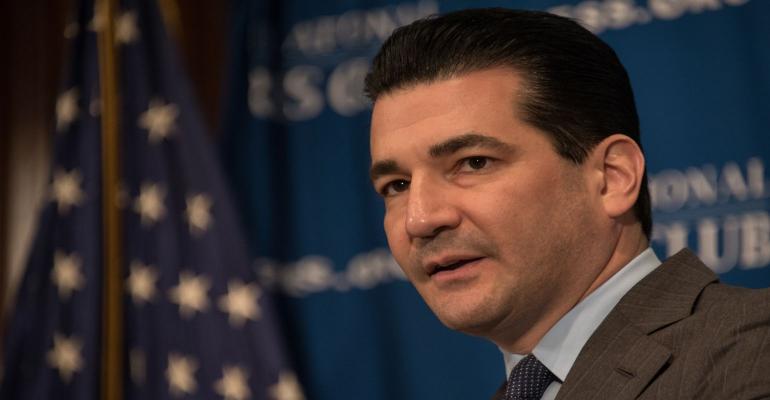 The agency is exercising "enforcement discretion," but not for companies making "over the line" claims.

FDA’s outgoing commissioner on Thursday told lawmakers his agency is using its “enforcement discretion” to target products containing cannabidiol (CBD)—an ingredient from the cannabis plant that has proliferated in cosmetics, food, beverages and dietary supplements.

“We’re using enforcement discretion right now,” FDA Commissioner Scott Gottlieb, MD, said during a hearing before a subcommittee of the U.S. Senate Committee on Appropriations in response to a question from Sen. Patrick Leahy (D-Vermont). “I will take enforcement action against CBD products that are on the market if manufacturers are making what I consider ‘over-the-line’ claims.”

For example, Gottlieb said FDA would take action against marketers of CBD that claim to cure cancer or prevent Alzheimer’s disease because those statements “could mislead a patient to forgoing otherwise effective therapy.”

FDA has targeted such claims in warning letters since 2015, but attorney Ashish Talati said in an email that Gottlieb’s remarks were noteworthy because they confirmed for the first time that the agency is “exercising enforcement discretion when it comes to CBD products."

“That will help as we see some FDA investigators, state and local officials referencing FDA's Q&A page [on CBD] and making enforcement decisions,” said Talati, a partner in Chicago with Amin Talati Upadhye LLP, who counsels clients on FDA regulations and the complexities surrounding CBD.

Citing “enforcement priorities and our limited resources,” Gottlieb acknowledged CBD-containing products are on the market that FDA hasn’t taken action against. There are reportedly hundreds of brands in the hemp-derived CBD market.

“That’s not an invitation for people to continue marketing these products,” Gottlieb said during a congressional subcommittee hearing to review the fiscal year 2020 budget request for FDA. “We’re concerned about it, but we heard Congress loud and clear here. We know you want a pathway.”

In the 2018 Farm Bill, Congress removed hemp from the Controlled Substances Act and treated it as an agricultural crop—a seismic shift in U.S. cannabis policy.

But hurdles remain to marketing CBD in certain product categories. For years, FDA has asserted CBD can’t be added to food or sold in dietary supplements based on its interpretation of the Federal Food, Drug & Cosmetic Act (FDCA).

In 2018, FDA approved a CBD medicine, Epidiolex, for the treatment of seizures associated with rare forms of epilepsy. CBD was previously the subject of “substantial clinical investigations” made public before the compound was marketed in a food or supplement, according to FDA.

“So even if there wasn’t an approved drug, because it was never previously in the food supply, we don’t have a clear route to allow this to be lawfully marketed short of promulgating new regulations,” Gottlieb said.

FDA is looking into a potential rulemaking that would allow CBD to be sold in conventional food and dietary supplements. During a Q&A earlier this month at the Brookings Institute in Washington, Gottlieb stated FDA can finalize an "average" rule in two to three years. But the commissioner suggested it would be much longer for CBD because it would be a “highly novel rulemaking to do a complex rule like this.”

In several speeches and in testimony on Capitol Hill, Gottlieb has signaled FDA is willing to work with members of Congress on a legislative solution if his agency determines a rulemaking would be too onerous.

Leahy asked Gottlieb keep him and his staff updated on any potential legislation solution.

Gottlieb disclosed FDA has assembled “a very high-level working group staffed by some of our most creative policy-makers to try to think through alternatives, including potential legislative alternatives.” Amy Abernethy, MD, PhD, Principle Deputy Commissioner of Food and Drugs who previously worked as chief medical officer of Flatiron Health, is leading the working group.

“FDA will look for industry input when it comes to that,” said Talati, who anticipated "a big role for the various hemp CBD stakeholders to play in the near future.”

It wouldn’t be unprecedented to allow a pharmaceutical drug and another product like dietary supplements to co-exist. Gottlieb mentioned fish oil as an example.

But Congress didn’t need to pass a law to allow fish to co-exist in multiple product categories, Gottlieb suggested, “because it was previously in the food supply. CBD obviously was not. It was a scheduled substance …. prior to recent years.”

Gottlieb is expected to depart FDA next week. It remains to be seen how his successor will view CBD. Norman “Ned” Sharpless, MD, director of the National Cancer Institute, will assume Gottlieb’s role on an interim basis.