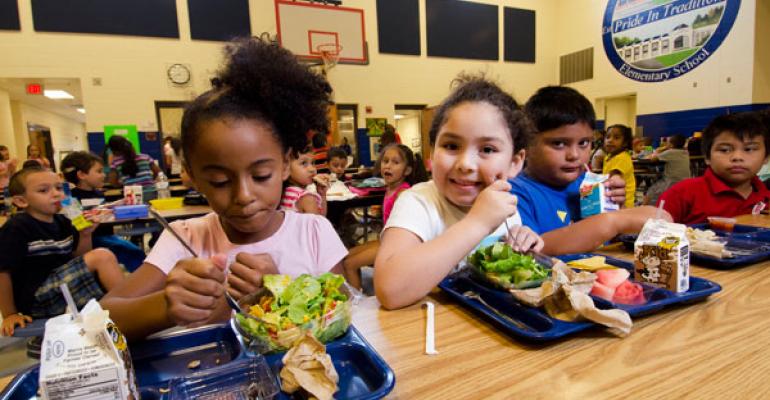 The documented increase in consumption of fruits and vegetables—and higher test scores—among American schoolchildren will give way to more refined carbs, sodium and sugar.

We don’t need no education, not when corporate subsidies and the difficulty of healthier new product innovation is at play.

The healthier school lunch program, championed by then-First Lady Michelle Obama, was passed in 2010. Called the Healthy, Hunger-Free Kids Act, its purpose was to offer healthier meal options as part of the National School Lunch Program and School Breakfast Program, which subsidizes meals to 32 million students a day.

The hue and cry among defenders of the unhealthy, convenient status quo—the ones highlighted during celebrity chef Jamie Oliver’s TV run—complained that healthier school lunches would lead to substantially more food waste because kids don’t want to eat healthy foods.

The US Department of Agriculture will publish in the Federal Register on Wednesday, Dec. 12, its new rule that gives local schools the option of creating whatever types of school breakfasts and lunches it would like.

A press release by the U.S. Department of Agriculture in cementing in the roll-back to unhealthier options actually had the headline, “Ag Secretary Perdue Moves to Make School Meals Great Again.”

“Children all across America deserve world-class food service – and schools are best positioned to deliver that service in their communities,” said Acting Deputy Under Secretary for Food, Nutrition and Consumer Services Brandon Lipps. “USDA is committed to providing the local flexibilities they need to do what they do best – serve our kids nutritious meals they want to eat.”

“They want to eat.” That’s the stated concern.

The USDA said it was taking the step to make meal planning easier for schools and to entice more children to eat healthful food. The number of students eating meals at school peaked in 2010 and has dropped by about 8 percent since: In 2010, 5.2 million students ate school lunch, but by 2017, it was 4.8 million.

“Schools want to offer food that students actually want to eat. It doesn’t do any good to serve nutritious meals if they wind up in the trashcan,” Secretary Perdue said in a statement.

So, there are 400,000 fewer school children participating in the program since the improved health standards went into effect—but still 4,800,000 students are eating better.

One concern noted by USDA Secretary Purdue was that in the Deep South, it was difficult to make grits as whole grains because the whole-grain version looked different. The Deep South is also the regarded as the part of the U.S. with the highest obesity, diabetes and overall unhealthy rates. It leads the nation in heart disease, which studies show is attributed to the “Southern diet.”

American Heart Association CEO Nancy Brown was critical of the new rule, saying it “deserves an ‘F.’” Brown said in a statement, “This new rule is described as an effort to give the nation’s schools more ‘flexibility’ on what foods to serve our children. But the truth is it would revoke school nutrition standards that will help kids attain better long-term health and academic success.”

“Think about why someone is okay with your kids eating crap,” said Michelle Obama. “Because here is the secret, if someone is doing that they don’t care about your kid.”

The healthier school lunch program is tied up in a lot of politics—from Southern Republican politicians who don’t want the federal government telling them what to do, to food-service giants like Schwan’s and ConAgra that make a lot of money from government contracts and might not want to be challenged by having to reformulate healthier food options.

A study conducted during the 2013 school year in four urban Massachusetts, low-income school districts in grades 3-8 found the status quo (as ever) was more interested in their own well-being and not that of the community. Researchers from Harvard School of Public Health and other institutions found the new policy actually led to a 23 percent increase in fruit selection and a 16.2 percent increase in vegetable consumption, though taking away sugar-sweetened chocolate and strawberry milks, as well as whole milk, led to a decline from 64 percent of students drinking milk to 54 percent after the policy implementation.

“Contrary to public concerns, the new school meal standards did not lead to increases in meal waste for entrées, fruits, or vegetables in this urban, low-income population,” concluded the researchers. “This study suggests that further weakening of the new school meals standards should not be considered, as this could potentially lead to decreased fruit and vegetable selection and consumption. The improved dietary intakes will likely have important health implications for children.”

In 2017, researchers at UC-Berkeley assessed whether healthier school lunches would lead to an improvement in test scores, and found it did: 0.03 to 0.04 standard deviations higher (about 4 percentile points) on end-of-year academic tests. In addition, the researchers found that test score increases are a significant 40 percent higher for students who qualify for reduced-price or free school lunches—the ones who are most likely to eat the school lunches.

While it was too early to tell whether the long-range motivations—childhood obesity and developing healthier lifelong eating habits—was also working, the healthier school lunches did not lead to more food waste, and led to more school kids eating more fruits and vegetables, and led to higher test scores.

Which is to say, the evidence will show that it was Michelle Obama who was making America's school children great again.