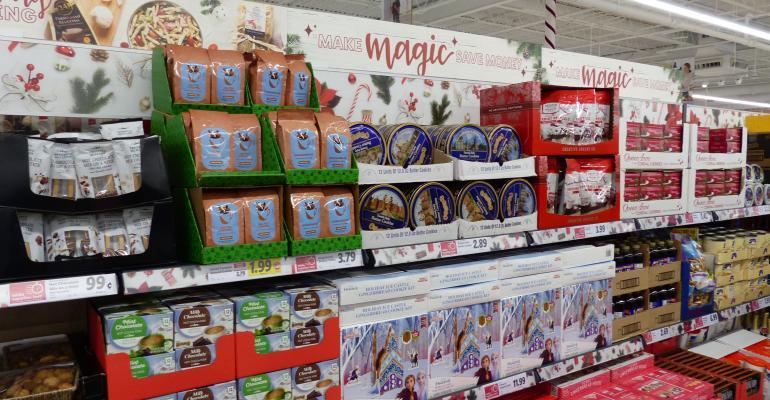 NRF said yesterday that November/December retail sales totaled $730.2 billion, near the top of its projected range of $727.9 billion to $730.7 billion. The annual percentage increase for 2019 also came in at the high end of NRF’s forecast of 3.8% to 4.2%. Figures exclude automobile dealers, gas stations and restaurants.

At grocery and beverage stores, 2019 holiday sales rose 2.9% from the 2018 November/December period, according to NRF, whose numbers are based on U.S. Census Bureau data.

The categories with the next-largest gains were furniture and home furnishings (+2.6 year over year), health and personal care stores (+1.6%), building materials and garden supply stores (+1%) and general merchandise stores (+0.4%).

The growth rate reported today is nearly double the weak 2.1% seen during the 2018 holiday season, which was slowed by a government shutdown, stock market volatility and interest rate hikes. Sales during December 2018 were down 0.2% from the year before.

“This was a healthy holiday season, especially compared with the decline in retail sales we saw at the end of the season in 2018,” NRF Chief Economist Jack Kleinhenz said in a statement. “Despite a late Thanksgiving and worries about tariffs, the consumer didn’t go away. We’ve had months of strong employment numbers, high wages and strong household balance sheets. There’s no doubt that gave consumers a sense of confidence about their ability to spend, and they did their part to keep the economy moving.”

One area that consumers kept moving during the 2019 holiday shopping season was online retail. NRF said November/December online and other nonstore sales surged 14.6% year over year to $167.8 billion, topping the forecast of 11% to 14% growth to between $162.6 billion and $166.9 billion.

“Having spent the last week with top retail leaders from around the world at our annual convention, and spending time at the White House yesterday with government policymakers and economists, these numbers validate continued optimism for increased investment and opportunity in the retail industry,” NRF President and CEO Matthew Shay stated Thursday. “This is a consumer-driven economy, and by any measure, the consumer has put the economy in a solid position for continued growth. This is a strong finish to the holiday season, and we think it’s a positive indicator of what’s ahead.”

In December, retail sales edged up 0.5% seasonally adjusted from November and rose 6.7% unadjusted year over year, according to NRF. November saw a 0.1% month-over-month dip in sales but an increase of 1.3% year-over-year. As of December, the three-month moving average was up 4.1% over the same period a year ago versus 3.1% in November.

Kleinhenz noted that December’s sizable gain and November’s modest growth reflect in part a calendar shift in the 2019 holiday sales season, as two key days of the Thanksgiving shopping weekend—Sunday and Cyber Monday—fell in December.

Earlier this week, retail giant Target Corp. said its 2019 holiday sales were below expectations, with comparable sales up 1.4% overall for the November/December period. However, by category, Target’s performance reflected some of NRF’s findings.

“When you look across the business, we saw strength—both sales and market share gains—in frequency categories like essentials and food and beverage. Beauty was a true standout. Apparel, a high-margin business, also performed exceptionally well,” Target Chairman and CEO Brian Cornell said in a Q&A on Target’s holiday results. “At the same time, there was notable weakness in electronics and parts of home. After two strong holiday seasons in toys, our growth was essentially flat, but we continued to grow market share in the category.”

And as across the retail sector, Target saw strong online holiday sales—with digital up 19% in November/December—and a burst of activity during the lead-in Thanksgiving weekend.

“Consumers continue to kick-start their holiday shopping around Thanksgiving, and the six-day promotional period that includes Thanksgiving, Black Friday and Cyber Monday was especially strong,” Cornell said. “We also noticed that consumers are more and more comfortable shopping later in the season. In fact, on Christmas Eve, our store team members prepared nearly five times the number of products for Drive Up orders than on Dec. 24 of last year.”