St. John’s wort gets its groove back on the supplements aisle 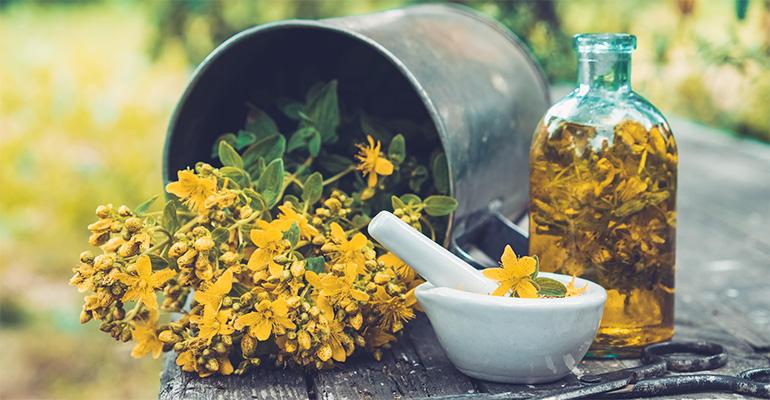 St. John’s wort (Hypericum perforatum) is a leading herb featured in many brands’ mood-support supplements. The herb was all the rage 20 years ago, shown in human clinical trials to be effective for those with mild-to-moderate depression.

Then, a major study published in Journal of the American Medical Association in 2001 found 900 mg of the herb for four weeks, then boosted to 1,200 mg for eight weeks, was ineffective for major depression. Note that the study looked at major depression, not the mild-to-moderate depression for which St. John’s wort has been historically used.

JAMA followed that study with another published human clinical on the herb, this time also using the pharmaceutical drug Zoloft, again for major depression. This time neither compound worked, but the conclusion from the study authors noted only that “the complete absence of trends suggestive of efficacy for H. perforatum is noteworthy.” While the anti-depressant drug also failed, the authors focused on the herb. Of course the headlines all said just that the herb doesn’t work for depression, and consumers looked elsewhere for their troubles.

A 2005 study comparing the herb to the pharmaceutical drug Prozac for major depression showed the herb was better, but the die was cast.

Related: Stressed-out consumers can find support in the supplement aisle

The sad part of the study was that St. John’s wort was compared to the leading pharmaceutical drug and against severe depression, not the mild-to-moderate depression it has long been used against. Significantly, the study found neither compound worked—not the herb nor the drug. The entire study was null, yet all people read about in the media was how St. John’s wort did not work for depression.

A 2006 meta-analysis of all studies looking at the herb on mild-to-moderate depression concluded “all studies demonstrated a significant drop in the Hamilton Depression Rating Scale scores for clients taking SJW compared with placebo or pharmaceutical antidepressants.”

St. John’s wort has gotten its groove back, thanks to the forgiveness of passing time and a hip rebrand that it helps for mood. Depression can still carry a stigma, but mood is a kinder, gentler health state that the public more readily embraces.

“It seems like in recent years St. John’s wort was getting a bad rap for potential interactions it could have with prescription medications, which may have had a negative impact on its popularity,” said Amber Cerda, director of marketing at NOW Foods. “Several high-profile studies done on it were not well designed and were more appropriate for studying drugs, not herbs, so did perhaps contribute to consumers questioning its efficacy.” Cerda said NOW uses St. John’s wort, at the clinically validated dose of 300 mg, in its mood-support supplement.

“Consistency is important to help determine if it’s working for you,” said Charlotte Traas, vice president of sales, North America at TopGum Industries. She previously was the director of education and content at New Chapter. “I don’t think consistency and products with clinically studied dosages are spoken about enough when talking about botanicals products as a whole.”

In the Aisle: Supplements supporting the mental wellness revolution
Jan 31, 2023