HomeBusiness Resources'Share the why' and other ideas for communicating at Expo West
Recent
Latest
Sponsored Content
How brands can get their trade spend under control – article
Sponsored Content
Going organic lifts everyone up – video
6 natural brands partner with UNSTUCK on new product line to aid refugees
Jun 23, 2022
Sponsored Content
The power of organic messaging – download
Trending
Getting ready for 2023: Trends for brands to consider
May 17, 2022
Unboxed: 7 clean collagen powders with a twist
Jun 21, 2022
12 brands marketing positivity, kindness and joy
Jun 17, 2022
Coca-Cola axes Honest Tea, but its founders are just getting started
Jun 07, 2022
Natural Products Expo
brought to you by

'Share the why' and other ideas for communicating at Expo West 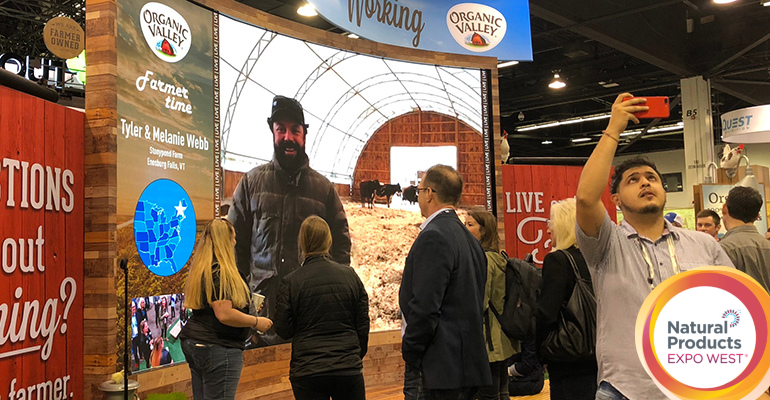 Make the most of every moment inside (and outside) your booth when retailers, media and others visit.

Natural Products Expo West is back in-person. Exhibitors are ready to connect. With so many choices, getting attendees into the booth takes the right kind of approach.

"Expo West is such a behemoth of a show, you have to give people a reason to stop and say, 'What's going on here,'" says Katie Stinson, director of marketing and brand strategy at Alaffia.

Historically Alaffia, a Fair Trade beauty and body company that helps alleviate poverty by promoting gender equality for women in the West African country of Togo, has showcased African musical and dance performances.

"This year we are stripping away some of the razzle dazzle," Stinson says. "Expo West hasn't happened in-person because of COVID and the pandemic. It's more about how do we just connect with people, talk to people. People are craving that connection."

They are far from alone. Many exhibitors expect more one-on-one conversations.

Stinson says they will focus more on product innovations that will be brought to market in the coming months, and foundation's community programs that have built 16 schools; donated bicycles, school supplies and eyeglasses; and helped with maternal care, funding more than 5,500 births in a country where 1 in 16 women have a chance of dying according to UNICEF.

It's a given that food and sampling are a big draw. But with COVID restrictions still in place, many companies have modified their offerings to make the most of conversations and sampling in a safe manner.

Here's how to capitalize on booth interactions at Natural Products Expo West.

The art of storytelling comes from not just relaying the facts, but the reasons behind the actions. Share those reasons when an attendee visits a booth.

"Lead with whatever that why is," says Jennifer Bushman, the head of strategic development at Kvarøy Arctic and a well-known aquaculture consultant. "Something motivated you to start your company."

Kvarøy Arctic, a third-generation Norwegian family business, worked with motivational speaker Simon Sinek, author of "Start With The Why," and his team to learn how to share their story more effectively, she says.

"We hired a member of their team who did virtual presentations," Bushman says. "As Simon says, 'People don't buy what you do, they buy why you do it." 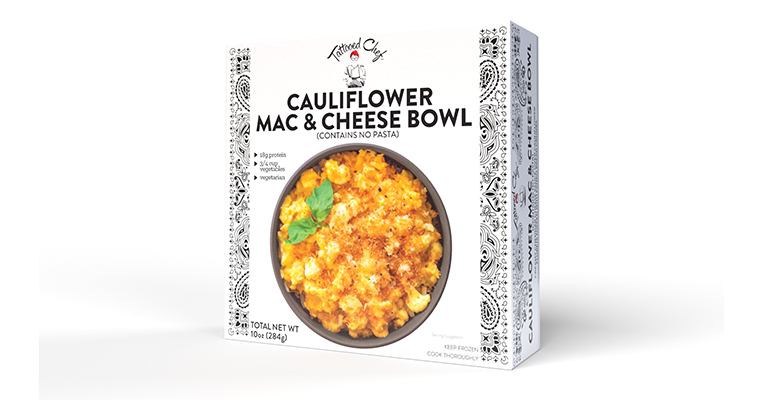 Bring the fun, personalize it

Inside its 30 foot by 40 foot booth, Tattooed Chef is showcasing an 8-foot-long kitchen counter with a shadowbox shelving unit that looks like it came out of founder Sarah Galletti's living room, says Brooke Golden, who's in charge of strategic marketing for Tattooed Chef.

Galletti curates a monthly "Taste the James" playlist on Spotify and has a special playlist for Expo West this year that will be given out as a QR code with temporary tattoos and other swag.

"It's welcome to our home and come hang out with us," Golden says. "We'll have music playing throughout the booth because we want people to have fun. We're all in need of that and more personal connections."

The two-story booth will include an interactive "Give a Crop" lounge—keying into the brand's "Plant Based Foods for People Who Give a Crop" tagline—where attendees can leave a message on "old school phone" regarding what they care about.

"This is a celebration," Golden says. "We haven't been together for two years. It's about being together, Italian-family style."

There's also a massive media wall and new product showcase with a more open floor plan that is "less food forward given potential concerns about how attendees' comfort levels will be with taste testing," Golden says. Upstairs, the second story of the booth will offer meeting rooms, so the team doesn't feel like it's hovering but can have more private interactions, Golden says.

Rather than sharing samples with everyone at the show, Tattooed Chef is going to be more focused on key products—such as refrigerated bars for retailers, media or other attendees—that will be shared on a meeting-by-meeting basis, Golden says.

"We wanted to be able to do sampling in a more personal way given the COVID regulations around food," Golden says. "So that's how we solved it." 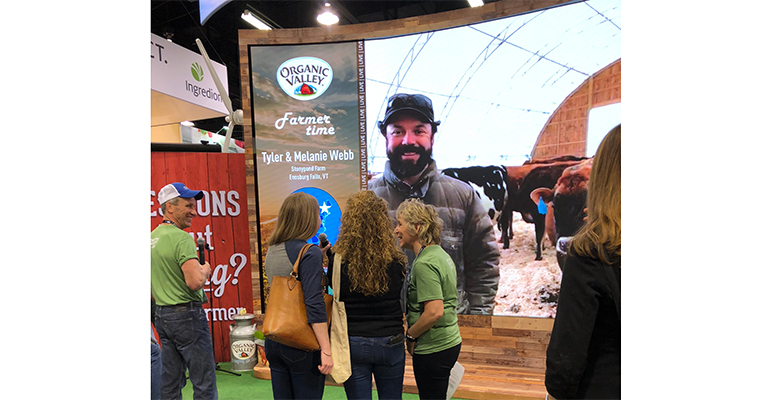 There's also a grab-and-go refrigerator to mimic how salmon hotdogs and burgers can be displayed at retail, coupled with a long lunch-style counter and umbrella. The back of the booth is wrapped in a beautiful scene of the Arctic and the family farm in Norway, and the floor looks like a sheet of ice. Nets that are used by the farm line the booth, coupled with wooden columns.

Organic Valley is showcasing "the cheese pull" by making grilled cheese sandwiches with its American cheese slices on a griddle.

"If you cut a grilled cheese in half and pull it apart, a really good grilled cheese will have some pull," says Kendra Arch, marketing events manager at Organic Valley, whose team is bringing 1,800 slices of Dave's Killer bread to make 900 grilled cheese sandwiches. "We want people to smell it and taste it."

Organic Valley is also sampling its Prenatal and Postnatal Support Smoothie Mixes and gearing up for lots of questions.

"It's not just for pregnant or expecting people," Arch says. "Anyone can drink them and it's not going to make you lactate, which is the biggest thing guys were asking when we were testing it."

In the past, Organic Valley, a cooperative of more than 1,700 farmers, had farmers livestreaming to the tradeshow floor. The massive 19-foot screen took up half the booth, but it allowed farmers to participate without too much of an effect on their schedules. She shared some hints for making such and endeavor work:

Find farmers with the right personality who are interested in talking on camera, Arch says.

For a flawless experience, test the equipment, including the audio and Internet access—which might require a farmer upgrading a router or access point.

"Don't be afraid to hire something out, if you feel that that's an important part of your booth," says Arch, who hired Astound Group in Las Vegas to manage its livestream in 2019. "They set everything up, and had a tech person on site, which gave everyone peace of mind to know it was all taken care of."

Or opt-out of tech, focus on in-person

With "Zoom fatigue" at an all-time high, Organic Valley opted out of doing a farmer livestream this year to focus more on in-person interactions.

Instead, Organic Valley is bringing in farmers to the show: Steve Pierson runs Sar-Ben Farms, a fifth-generation dairy in St. Paul, Oregon, and Stephanie and Travis Tranel of Wisconsin-based Tranel Family Farms. 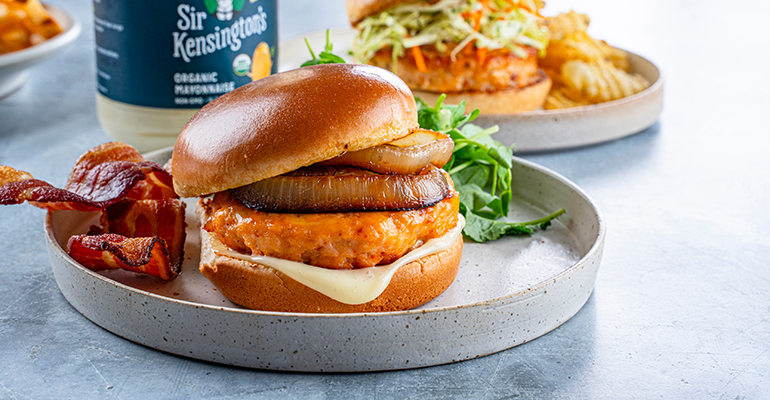 For Kvarøy Arctic, innovation means announcing the elimination of all of its Styrofoam boxes.

"We've developed a technology where we can now ship our fish in a regular recycled box that can be folded up and put into a recycling bin," Bushman says.

The company will also highlight other sustainable practices such as marking the fishing nets and ropes it uses on the farm in Kvarøy blue. "If something breaks loose and floats up on shore, then we know it's ours," Bushman says. "We'll fine ourselves and make a donation to a plastics clean-up group the Artic and pay interns to do coastal cleanup during the summer." 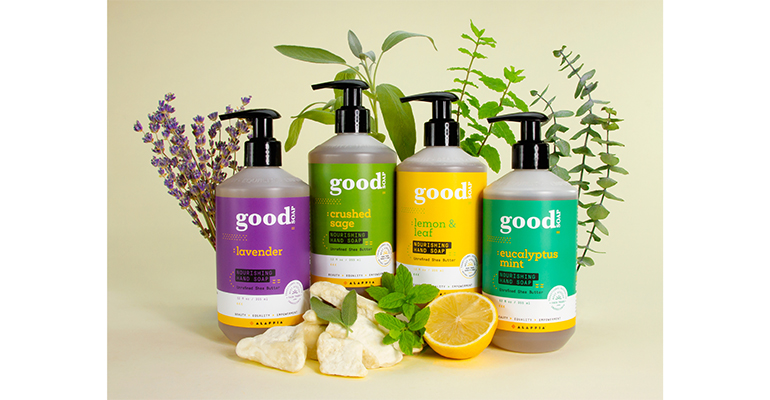 "For us it's all about the touch and feel," Stinson says.

"We're still in the middle of a pandemic," she adds, so Alaffia is focusing on products that clean, like its lavender-scented Good Soap hand soap and a whipped shea butter scrub that can be used as a body cleanser. It's also helped, Stinson says, that a viral Tik Tok video by an influencer—who says she isn't sponsored—touted the brand's Authentic African Black Soap.

That usually brings them into a booth, Stinson says.

"It's about being warm and inviting," she says. "You can obviously tell if someone's hearing from afar or kind of interested." Sharing a sample is an easy way to start a conversation.

"Don't be shy," she says. "You can sit and wait for people to come to you, but it's more about coming to them and seeing what their interest level is." 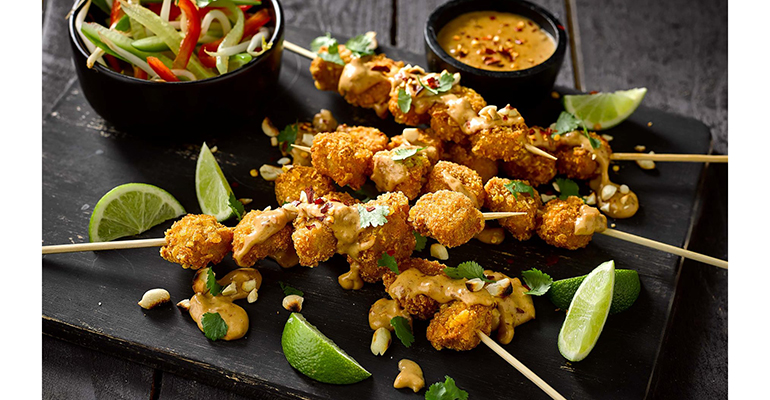 With its "food that takes no prisoners vibe," VFC is hosting an "exclusive invite-only party" for "a night of free-flowing Vegan Fried Chick*n, music and drinks" after Natural Products Expo West. It will be at Sacred Junk Bar, a plant-based spot known for its local and organic spirits, located 10 minutes from the Anaheim Convention Center.

Alison Reilly, the marketing manager for United Kingdom-based VFC, says because the brand is new to the U.S. market, throwing a party is a great way to "introduce ourselves to potential customers, press and influencers, and celebrate with friends and colleagues in the meat-free space."

Another reason, Reilly says, is "the show is going to be really busy, and by holding a party we get the opportunity to spend time with people without time constraints."