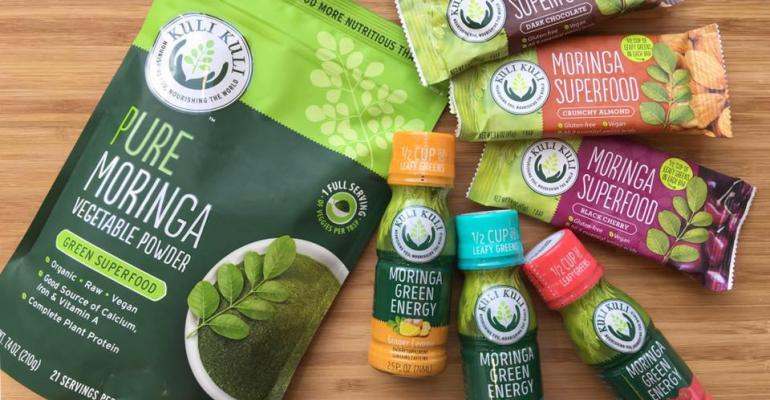 The investment vehicle created by Kellogg Company in June 2016 to seek out “next-generation innovation” in ingredients, food and packaging has made its first investment in a brand with social mission at its core.

Eighteen94 and two other investment firms focused on funding sustainable food and agriculture companies, S2G Ventures and InvestEco, participated in a $4.25 million Series A round for Oakland, California-based moringa company Kuli Kuli.

Related: Innovation via collaboration: The millennial way to launch a product

Kuli Kuli was founded by former Peace Corps service member Lisa Curtis, who discovered that including the plant moringa in her diet helped her feel more energetic during her time in West Africa. She built the company around the idea of sourcing organic moringa powder from women-led cooperatives there, and developing products that incorporate the ingredient, which is rich in iron, calcium and antioxidants. It launched in 2013 with snack bars and was lifted early on by a community of crowdfunders. It then introduced moringa powder and energy shots, and continued to build its supply chain in other parts of the world. In 2016, the company did more than $1 million in sales, tripling its revenue from 2015.

“We see the potential in Kuli Kuli and in moringa as a next-generation superfood,” said Simon Burton, managing director of Kellogg’s eighteen94. Indeed, numbers from New Hope Network's NEXT database, which tracks products exhibited at the Natural Products Expos, suggest that moringa is a rising ingredient, especially among progressive consumers. The number of moringa-containing beverages exhibited at Natural Products Expo West more than doubled between 2014 and 2016, while the number of diet and nutrition products containing the ingredient increased 70 percent.

But while a trendy ingredient is one thing, at the heart of the business is the desire of Curtis and her fellow cofounders to connect people in the U.S. market looking for nutritious food with those in the developing world whose livelihoods depend on producing it. And that purpose was part of the draw for eighteen94, according to Burton. “Kuli Kuli’s social responsibility and sustainability efforts dovetail nicely with Kellogg’s,” he said. “(It) is a great investment for us—an opportunity to learn from them and for us to share our expertise for their continued growth.”

Curtis said that the round will allow Kuli Kuli to make some key additions to its current five-person team, including sales, marketing and operations positions. “We’ve also started conversations with some of our key retail partners about some of the different product ideas we have,” she said. “We should be starting to work on some ideas this year.”

Of course, with Big Food money comes skepticism that Kuli Kuli can retain its authenticity and focus. That’s part of why the company decided to change its legal status and become a benefit corporation as part of the fundraising process. Being registered as a benefit corporation builds the company’s corporate purpose and impact on society, workers and the environment into its legally defined goals. “You have to have the consent of all of your investors (to do that), so we were very upfront about it with them,” Curtis said. “It was a nice litmus test to make sure that everybody was on board with our social purpose being at the heart of our company.”

Burton, who is now a member of its board of directors, noted that Kuli Kuli will remain autonomous and that Kellogg will provide knowledge and resources in the way of supply chain, marketing, sales and innovation.

For Curtis, that kind of added value was a must-have as she met with investors. “I think Kellogg’s eighteen94, InvestEco and S2G can all benefit our company beyond just writing a check,” she said. “We’re excited for the fundraising to be over and the real fun to begin.” (See our full interview with Curtis here.)