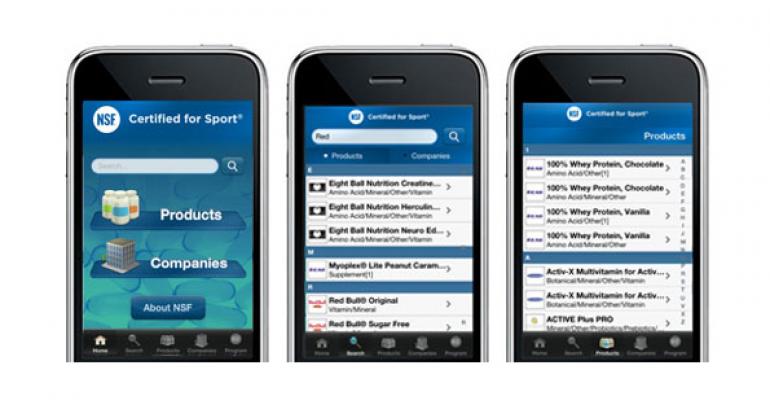 A new, free mobile app developed by global public health organization NSF International is making it even easier for consumers to search and find dietary supplements and sports nutrition products that have earned NSF Certified for Sport certification.

The NSF Certified for Sport program was developed by NSF to help athletes, coaches, trainers and health and fitness enthusiasts make more educated decisions when choosing nutritional supplements. NSF screens supplements for more than 165 banned substances and undeclared ingredients including stimulants, narcotics, steroids, diuretics, beta-2-agonists, masking agents and other substances, as well as unsafe levels of contaminants. The NSF Certified for Sport program also tests and certifies that product content matches label claims, and inspects the manufacturing facility in which the products are made. Annual product re-testing and facility inspections verify ongoing compliance with program requirements.

This new app arrives in the face of two recent supplement scandals and an erosion of consumer confidence in the sport supplement market. The U.S. Defense Department is investigating the safety of pre-workout substances containing Dimethylamylamine, also known as DMAA, after the deaths of two soldiers were possibly linked to Jack3d, which contains the substance. According to an article in Stars and Stripes, toxicology tests performed on the bodies revealed the presence of DMAA in their blood.

The controversy surrounding DMAA, also known as MHA, or methylhexaneamine, Forthane,  Geranimine, as well as geranium oil, stem and extract, centers around whether or not the substance is actually linked to geranium.

The year 2012 is also an Olympic year, when instances of athletes getting busted for using banned substances tend to rise. And, according to Nutrition Business Journal research, U.S. sales of sports nutrition supplements grew to $3.2 billion in 2010. The category’s 10 percent growth outpaced that of the overall supplement industry, which grew 4 percent in 2010.

General Manager of NSF International Ed Wyszumiala said the app is aimed at more than just professional athletes. “Health and fitness enthusiasts, parents of young athletes, coaches and consumers in general look for the NSF Certified for Sport Mark to help them make educated decisions when choosing nutritional supplements,” he said.

For those without a smartphone, Vitamin Shoppe recently announced that it received the NSF Certified for Sport Certification on its True Athlete line of products, making it the first retailer to do so.

The app is available for both the iPhone, iPad and Android, and the NSF Certified for Sport program is recognized by major sports organizations such as the NFL, MLB and their player associations, PGA, LPGA, NCAA and the Canadian Centre for Ethics in Sport (CCES).