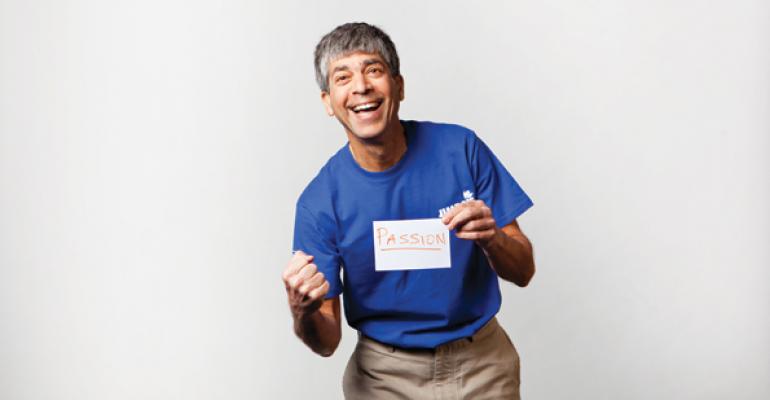 Jim &quot;Jimbo&quot; Someck has seen trends come and go and the competition grow in his almost 40 years in the natural foods business. Learn his survival tips and get his take on growing categories.

Jim “Jimbo” Someck lives his passion every day. “I’m fortunate that the work I do is what I believe in,” says Someck, owner and namesake of Jimbo’s … Naturally!, a four-store natural products chain in Southern California. “It just reflects who I am.” Through the years, more Americans are joining him as eating natural and organic foods becomes more mainstream, a trend Someck notes as an important change during his almost 40 years in the business.

Someck discovered his love of nutrient-dense foods when he began looking for more healthful alternatives to the dishes served in his college cafeteria. He found his niche in the 1970s at an Ocean Beach, Calif., workers’ collective, where he earned a $1 food credit for every three hours worked. Someck opened his first natural grocery store in 1984, and went on to open the four existing Jimbo’s … Naturally! outposts in the competitive Southern California market. (He has since sold the original store.)

We chatted with Someck to find out how the industry has changed in the nearly four decades he’s been involved and to hear which market trends he suspects will shape the future of natural products retail.

Natural Foods Merchandiser: What stood out in the natural marketplace in 2011?

Jim “Jimbo” Someck: Various trends have come and gone through the years, but recent ones—specifically raw and gluten-free foods—are not just fads but are here to stay. Awareness surrounding genetically modified organisms has grown tremendously in the past couple of years as well. What started out as a subject people knew barely anything about has become an issue of national discussion.

I think the rebound from the economic difficulties of a couple of years ago is continuing in the natural foods industry—another reason why not only I’m fortunate, but the entire industry is lucky.

JS: It’s probably as good as, if not better than, 2011. You often have to stop and think: How long can we maintain these sales increases? But it goes back to the idea of what’s changed the most since I’ve been in this industry, and that’s the level at which more and more people are getting into natural foods. There’s now more of an understanding of the impact eating good food can have on you and your family’s health, and how much better it is for our planet.

NFM: Which categories are winning and which are losing?

JS: Across the board, year-over-year comparisons have been pretty strong. Again, gluten-free and raw foods are definitely on the uptick; they’ve been that way for a while. And customers are seeking products labeled GMO free or verified by the nonprofit Non-GMO Project. Meanwhile, prepared food sales are growing well percentagewise. Produce remains the mainstay.

Vitamin and supplement sales have leveled off, however. The competition is pretty strong, especially because people have such easy access to the Internet and can perhaps purchase vitamins at better prices than we can offer.

NFM: What’s the competitive landscape look like for you?

JS: With Trader Joe’s, Whole Foods, Sprouts and more, the marketplace is pretty competitive. We’ve been successful because we’re stringent in our ingredient criteria and strong in customer service. We don’t deal with advertising our prices because we are very competitive, even below most natural foods stores. Community involvement also has been integral to our success.