HomeBusiness ResourcesBranding and Marketing'Eat brighter' promotional campaign helps produce sales for 3 retailers
Recent
Latest
6 tips to promote consumer understanding of Certified Organic
May 18, 2022
Sponsored Content
Balanced Health Botanicals Newsletter – May
Getting ready for 2023: Trends for brands to consider
May 17, 2022
EXPO VIDEO: How did a young sparkling water brand get licensing deals with Marvel and Disney?
May 16, 2022
Trending
Debra Stark’s light shines bright on natural products industry
May 10, 2022
Unboxed: 7 plant-forward ice creams to stock this summer
May 10, 2022
Hemp CBD industry struggles so far in 2022
May 10, 2022
Monitor: Consumer research on collagen shows how much education is needed
May 12, 2022 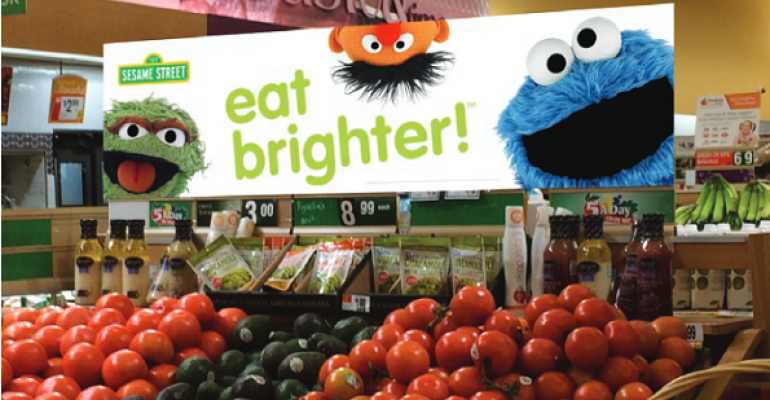 Three retailers using “eat brighter!” promotional materials with Sesame Street characters in the produce department report that fruit and vegetable sales are higher this year than the same period last year, according to a new survey from the Produce Marketing Association.

Currently, four retailers are actively using the eat brighter! materials in a total of 259 stores in nine states, according to PMA. One retailer has not been using the materials long enough to report sales.

Among suppliers participating in eat brighter!, there was an average reported sales increase of 3 percent in the second quarter, compared to the same period a year ago. The average sales increase for suppliers in the market for three quarters was 5.3 percent.

“This is an encouraging sign, and we’re thrilled that participants are able to take the eat brighter! assets, available through an unprecedented program agreement with Sesame Workshop, and turn it into results like these," PMA president Cathy Burns said in a letter to members. "Now that the program has been extended through 2018, we look forward to seeing positive growth in this trend as more kids and families experience eat brighter! in stores."