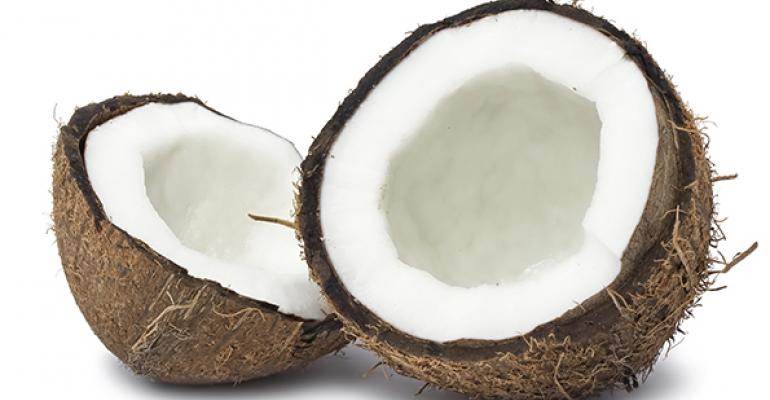 Its versatility, health and wellness attributes and &quot;free-from&quot; qualities have led to a 121 percent growth in new products featuring coconut.

Firmenich has announced that coconut is the Flavor of the Year for 2016.

Used for centuries in Southeast Asian cuisine, coconut was only embraced globally in the last decade. Before, in much of the Western world, coconut would mainly conjure up images of sugary-sweet cocktails such as pina coladas. It wasn't until coconut water hit the shelves en masse between 2005 and 2008 that the world took serious notice. Since then, coconut has continued to increase its presence in the food and beverage world and its popularity shows no sign of slowing. "Coconut in general is benefiting from being 'on-trend' on a number of fronts, and coconut flavored variants as a whole can be expected to continue to grow across the food and drink sector," says Chris Brockman, senior food and drink analyst at global market intelligence agency Mintel.

Firmenich believes the appeal of coconut lies in consumers' attraction to the feelings of balance and well-being that coconut evokes. The company notes that in the U.S., coconut water first appeared in yoga studios, and the association between wellness and coconut has remained strong. We live in a chaotic world, faced with an abundance of stimuli, and as this way of life continues, Firmenich predicts consumers will continue gravitating to the calmness of coconut.

The power of coconut

Coconut, which is in fact a seed and not a nut, can have flavor described as anything from toasted and sweet, to creamy and lactonic, to fatty and fresh. As with most perennial favorites, this versatility is part of the appeal. One reason for the variety of coconut flavors is that there are many ways to consume coconut, depending on the maturity of the seed. For example in non-Asian cultures, the sweetness that was traditionally associated with coconut reflects the flavor of the meat, which develops over time and represents a riper seed.

The proliferation of coconut water introduced much of the world to an entirely new way to experience coconut flavor: young and fresh. Now that the world has embraced all that coconut has to offer, the flavors have become consumer favorites. "This new generation of coconut flavors in particular is modern and redefined, adding freshness and giving a different spin to products if compared to the well-established 'classic coconut' flavors," says Gerry Van Gerven, senior flavorist at Firmenich in Thailand.

Coconut is also a great team player, happy to take a supporting flavor role. Firmenich notes the popularity of combining other flavor profiles with coconut. "Great examples are coconut with vanilla, coffee and chilies, while fruits like pineapple, lychee and mango are great blenders for drink concepts," says Van Gerven. "But coconut flavors and fusions can be applied across numerous categories beyond drinks, from bakery and confectionary to dairy and savory, you name it and we can make coconut work!"

The world of coconut

Since 2010, the number of coconut flavored food and drink products introduced on the market globally has increased by 121percent, with an annual growth rate of 17 percent. This surge in product launches includes soups and sauces; coconut chips (both sweet and savory); popcorn and trail mix; coconut oil chews; and much more. Not to mention a coconut beverage craze that's blossomed well beyond water including coconut-flavored coffee, tea, vodka, milks and sparkling water.

"Coconut is a fantastic flavor for savory dishes. It works well in soups and sauces, and pairs beautifully with all four of the main animal proteins: fish, chicken, beef and pork, which is rare," says Stefano Marciano, a "TechnoChef" in the Savory group at Firmenich. "It adds a layer of complexity and depth to whatever you are cooking which makes it a fun flavor to work with as a chef."

What's more, as an ingredient, coconut has become a holy grail within the "free-from" circles: coconut flour allows for gluten-free baking; coconut aminos are touted as a soy-free alternative to soy sauce; and cultured coconut milk has found a place on the shelves as a dairy-free alternative to traditional yogurt. Search the internet for coconut and you'll click through endless pages of recipes for everything from coconut milk pancakes to coconut ranch dressing and beyond. There doesn't seem to be anything that this mighty seed can't do!

What started with water now knows no bounds

What some saw as just a passing fad with coconut water has now flourished beyond what trend forecasters could have predicted. Coconut water brands are expanding globally and new coconut-flavored products continue to enter the market. Feelings of balance and well-being remain of great importance to customers and Firmenich is confident coconut's appeal will only grow in 2016.

To respond to this ever increasing demand, Firmenich has used its creative and technical expertise to develop inspiring flavor applications with authentic tasting coconut for its food and beverage customers all around the world.

Infographic: Coconut nectar, the most sustainable sweetener
Oct 04, 2012
12 ingredients that will change the world
Apr 29, 2014