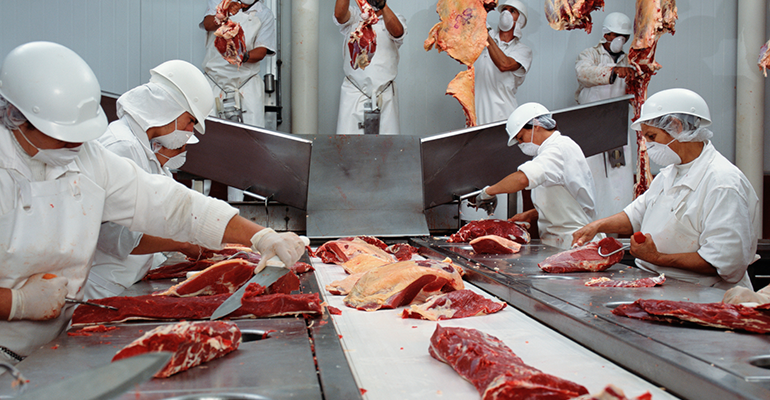 President Biden has a beef with the powerful US beef industry

President Joe Biden wants to break up Big Meat. Four meatpackers control more than 80% of the country's beef market, "an extraordinary concentration of market power," The Guardian says. One result of this monopoly? Five years ago, farmers received 51.5% of beef's sales price. Now, it's just 37.3%. Not surprisingly, the feedlots that fatten up the cows for market have also consolidated: less than 5% of feedlots control 80% of the market. While Lewis Sinclair rolls over in his grave, take a look at the history and status of this industry.

What to label the lab-made meat?

The U.S. Department of Agriculture wants consumers to weigh in on how laboratory-grown meat should be labeled. Comments can be submitted until Nov. 2. Gathering these comments is the agency's first step toward making a rule that will govern cell-cultured meat labels. In 2018, the U.S. Cattlemen's Association filed a petition supporting the use of "beef" and "meat" should be limited to products derived from flesh of a bovine animal that is slaughtered "in the traditional manner," according to Successful Farming.

The unemployed epidemiologist who predicted the pandemic

Evolutionary biologist Rob Wallace wrote in 2017, during the H5N1 avian influenza outbreak, that a pandemic might be inevitable. "In what would be a catastrophic failure on the parts of governments and health ministries worldwide, million may die." Yet, during the earliest stages of COVID-19, Wallace himself took a trip that resulted in his contracting the novel coronavirus. The Nation takes a look at Wallace's story and the book he published almost a year ago.

The supply chain is in crisis. How do we move forward?

Errol Schweizer, former VP of grocery for Whole Foods Market, takes a look at why the food supply chain is still dysfunctional, 18 months after the pandemic prompted shutdowns across the U.S. and the world. Some causes are less obvious than others: Who realized that lumber's skyrocketing cost is making pallets more expensive? See what else Schweizer has to say in Forbes.

Nabisco bakeries and distribution centers around the country shut down during August as workers began striking for better working conditions, as Spoon University explains in this news roundup. And it's not clear the picketing will end soon: Mondelēz' latest offer still includes 12-hour shifts for some positions. That offer expires Tuesday.