Three organizations that advocate for safe food, a healthy environment and animal welfare have asked the Federal Trade Commission to investigate Tyson Foods' advertisements for misleading claims regarding its chicken products.

The Organic Consumers Association, Animal Equality and Food & Water Watch submitted a joint complaint earlier this month. Last year, the three sued Tyson for misleading claims on its chicken labels. That case is in the preliminary stages.

Tyson's claims of its chickens being raised in a natural, environmentally responsible and humane way take advantage of consumers' desire for meat products that are "free of unnatural substances and produced sustainably and humanely," Ronnie Cummins, international director of the Organic Consumers Association, said in a released statement. "We look to the FTC for oversight and enforcement to protect consumers against deceptive product claims."

Contrary to its claims, Tyson's standards for animal care and sustainability are lower than a reasonable consumer would expect and are, therefore, deceptive, the complaint alleges. 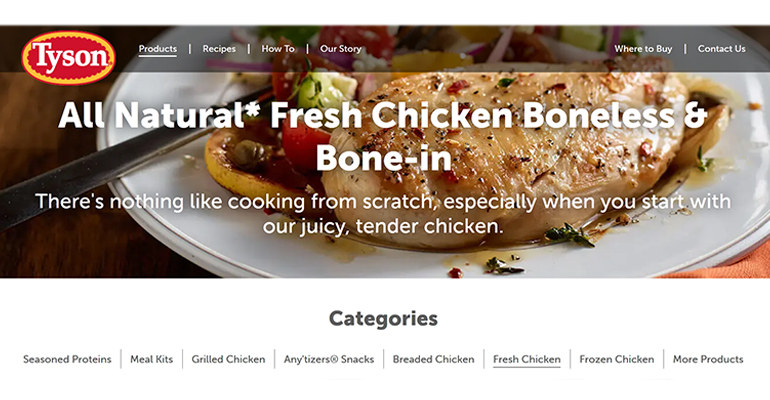 On its labels, its websites, its social media pages and in its television commercials, Tyson's represents its chicken products as all natural—often without providing a required disclaimer, according to the complaint.

The U.S. Department of Agriculture defines natural as "a product containing no artificial ingredient or added color and is only minimally processed" and requires food producers to include that information on labels and in media.

Many Tyson products do not include this disclaimer, and the company's advertisements and other media "include disclaimers that are hard to read and/or otherwise unclear," the complaint alleges. Among the links to commercials and screenshots from Tyson's website, the top of the fresh chicken category page says, "All Natural* Fresh Chicken Boneless and Bone-in" but does not explain the asterisk or include the disclaimer. 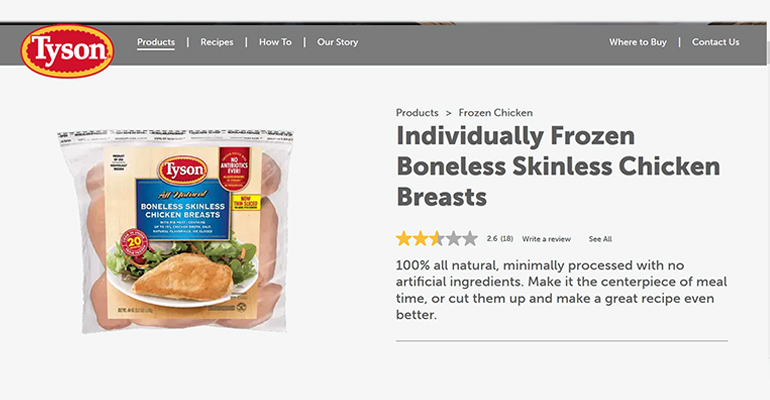 However, a screen shot of Tyson's frozen boneless, skinless chicken breasts—cited for not having the disclaimer—clearly shows the product's description, which includes "100% all natural, minimally processed with no artificial ingredients."

The screen shots in the complaint were taken Nov. 12; New Hope visited the pages on July 10. 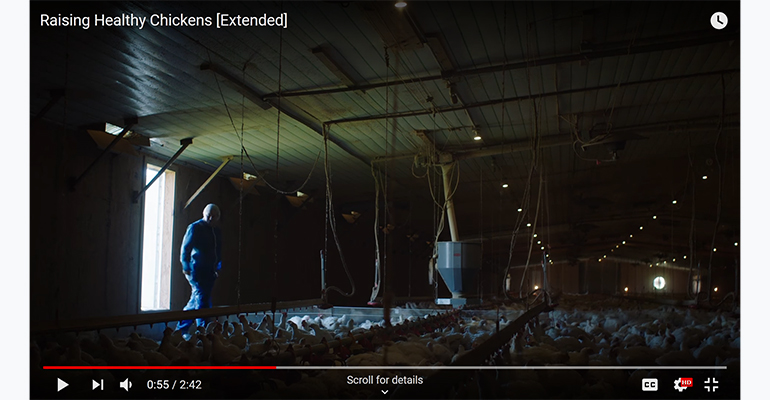 In the complaint, the Organic Consumers Association, Animal Equality and Food & Water Watch argue that Tyson Foods' advertising and marketing include false statements about its commitment to animal welfare and a clean environment.

The website for Nature Raised Farms, a Tyson Foods brand, stated on July 10, "Our goal is simple: to provide a great living environment and care for our animals. The chickens are raised in modern barns, not cages. They receive adequate lighting, and fresh air. Temperatures are computer-controlled for comfort year-round. The chickens are provided barn enrichments and other natural elements for them to perch on and climb." The complaint includes partial quotes from this FAQ page, cited on June 25. (The above photo was grabbed July 13 from the video, "Raising Healthy Chickens [Extended]," on the Tyson Brand YouTube page.)

Tyson "relies almost exclusively on industrialized factory-style operations for the production of its chicken products," the complaint states, including raising and slaughtering birds in facilities that are contaminated with drug-resistant pathogens; using toxic chemicals; and crowding tens of thousands of birds into massive barns without outdoor access.

The "inhumane and unsanitary industrial production practices" force Tyson's farmers to use antimicrobial drugs and chemicals to prevent infections, according to the complaint. "Chickens raised in healthy conditions with plenty of room to roam and dustbathe according to their natural instincts do not require the routing administration of antimicrobial drugs," the complaint states.

The U.S. Department of Agriculture's Food Safety Inspection Service has repeatedly found drug-resistant pathogens on Tyson chicken meat samples, according to the complaint. Tyson advertises that it doesn't use antibiotics on chickens used for certain products; according to the claimants, a chicken that needs antibiotics is removed from the "no antibiotics ever" product lines. "But use of antibiotics … means that resistant pathogens can spread throughout its supply chain, into the environment and to consumers of the products," the complaint asserts.

Tyson Foods also represents itself as a steward of the land and water, but the complaint states that the company is the second-largest polluter in the U.S., and the largest polluter in the agribusiness industry: Between 2010 and 2014, Tyson's facilities released 104 million pounds of pollutant directly into waterways. The complaint cites reports from the U.S. Environmental Protection Agency previously published by advocacy groups Mighty Earth and Environment America.

State and federal governments have taken Tyson Foods to court for environmental violations.

In 2005, the state of Oklahoma sued Tyson Foods and other poultry processors, claiming their wastewater raised phosphorus and nitrate levels in the Illinois River, a once-popular recreation area. The case was heard in 2009 and 2010, but federal judge who heard the case has not yet ruled on it.

The complaint also notes an ingredients plant in Cullman, Alabama, in June spilled 800,000 gallons of wastewater contaminated with E. coli, contaminating two rivers and killing fish. The following week, five employees at a plant in Springdale, Arkansas, were injured and burned in a chemical spill. The chemical was an acid that removes pathogens from poultry during processing.