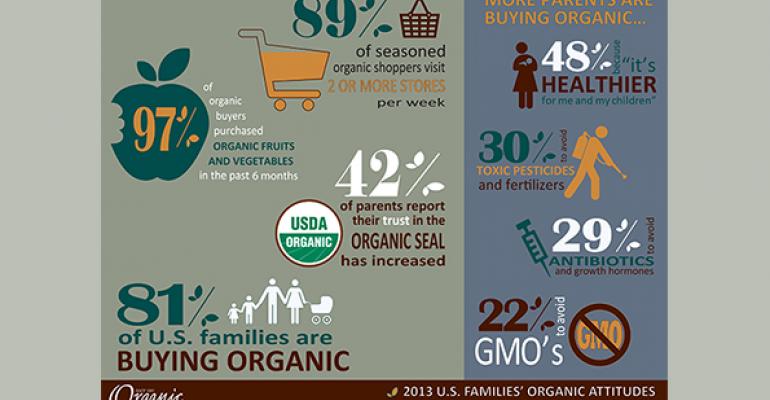 As organic increases year over year, recent surveys have some wondering: How much can organic grow amid continued consumer confusion? 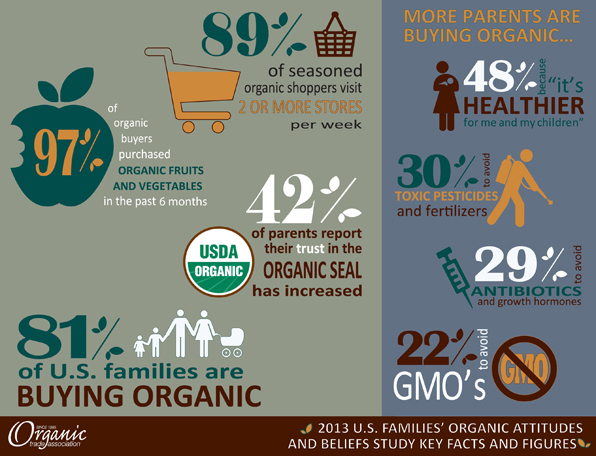 Last year was another banner one for the organic industry. SPINS tracked a 12 percent increase in sales of organic products across all channels, and the Organic Trade Association reported that a whopping eight in 10 parents now buy organic at least some of the time. “I would characterize the industry as exploding,” says OTA Executive Director Christine Bushway. “It was an incredible year of double-digit growth across many categories.”

Although there are many positives, the news is not all good for organic. Some industry observers—and several recent surveys—point out that mainstream consumers still don’t grasp what the USDA Organic seal means or how it benefits them, and many view it with suspicion. If this problem isn’t solved, the organic bubble could burst, fears Maryellen Molyneaux, founder and president of Harleysville, Pa.-based Natural Marketing Institute. “Consumers are very confused, and it is not getting better,” she says.

Looking first at the good news, industry observers say organic’s steady postrecession return to double-digit growth has been driven significantly by longtime organic consumers broadening their purchases across more categories, such as textiles, body care and supplements. “People interested in organic are considering not just what they put in their bodies, but also what they put on their bodies,” Bushway explains.

For instance, organic mattresses and cotton textiles are “going gangbusters,” she says. With organic cotton retail sales rising 20 percent, from $4.3 billion in 2009 to $5.16 billion in 2010, according to the 2010 Global Market Report on Sustainable Textiles. “Now you can buy reasonably priced organic bed linens at Target and Walmart.” Also, according to SPINS, sales of organic body care products climbed a jaw-dropping 34.9 percent across natural and conventional channels in 2012, while organic vitamins and supplements increased 20.2 percent.

Besides committed consumers buying more, organic continues to slowly attract newcomers, many of them parents drawn to the U.S. Department of Agriculture’s Organic seal out of concern for their families’ health. According to the OTA’s U.S. Families’ Beliefs and Attitudes study, 81 percent of surveyed families say they buy organic (up from 73 percent) in 2009. Forty-one percent are “new entrants” to the market, and nearly half say they buy organic food because it is “healthier for me and my children.” As for what items these shoppers are buying, 97 percent said they purchased organic fruits or vegetables in the past six months, while 85 percent bought breads and dairy.

Organic baby food spiked in 2012, driven in part by the massive mainstream expansion of Plum Organics and its squeeze-pack baby food. (Plum brought in $80 million in 2011 and made the Inc. 500 list of the nation’s fastest growing companies.) “With organic baby food, parents are really getting on board,” says Kurt Jetta, CEO of the TABS Group, a Shelton, Conn.-based consumer analytics company.

Baby food might be booming, but overall, Jetta does not believe organic has spread to the mainstream as much as some are touting. In fact, he says some mass merchandisers are actually considering scaling back their organic offerings. “A typical mainstream retailer is dedicating 10 percent of its space to organic, but that’s representing only 3 percent of sales,” Jetta says. “I’ve heard multiple mainstream retailers say that organic does not deliver enough sales or profit in relation to how much space they devote to it.”

Molyneaux says many consumers confuse natural with organic, mistakenly thinking natural is the one that requires third-party certification. Others are skeptical of both terms. “Consumers are buying, but not with understanding,” she says. “When the challenge comes, and they have to make a trade-off because of budget concerns, they may make their choice based on wrong information.”

This already might be happening in the United Kingdom, where, according to The Guardian newspaper, sales of organic products fell by more than 1.5 percent over the past year, as mainstream retailers cut back their offerings in the wake of a recession that turned many new organic buyers away from organic.

Molyneaux isn’t seeing huge numbers of newcomers gravitating toward organic either, and she fears that interest among newbies could be fleeting if they don’t clearly understand what they’re buying. NMI’s most recent survey of health and wellness trends found that only 33 percent of the general population recognizes and understands the USDA Organic seal—a slight decline in recognition from previous surveys. Three-quarters say organic is too expensive. Two-thirds say they question its authenticity. Four in 10 say the benefits of paying a premium price for organic are not clear. Even more concerning: When consumers were asked what attribute in a food they look for most (great taste, nutritious, grown without pesticides or GMOs, natural, from sustainable farms, etc.), USDA Organic ranked dead last, with fewer than 18 percent ranking it as very important.

Despite these challenges, both Molyneaux and Bushway say they have great hope for organic. They believe it can continue its double-digit growth—as long as retailers are mindful of pricing and the industry keeps educating people about its benefits. Both are banking on the proposed Organic Research and Promotion Order, which would establish an industry fund, administered by USDA and governed by an independent board, to launch a marketing program for organic along the lines of the successful “Got Milk?” and “The Incredible Edible Egg” campaigns.

“In my mind, there is one and only one challenge facing this industry, and that is educating the consumer about what organic delivers,” Bushway says. “We have made progress but we have a long way to go.”