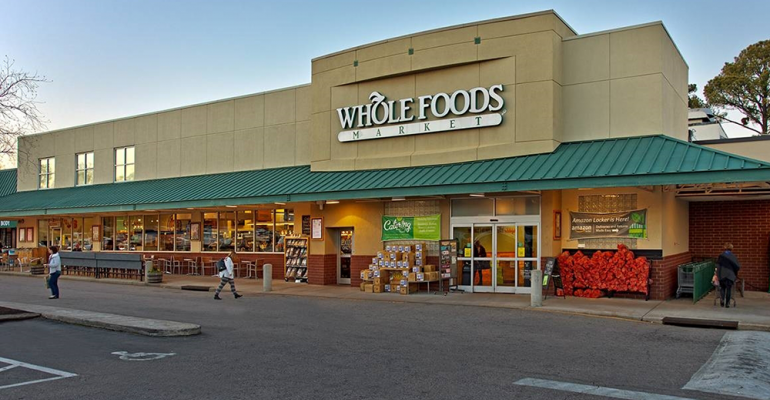 For the 2019 first quarter, foot traffic at Whole Foods climbed 16.5% from a year earlier, according to the Spring 2019 inMarket Insights Report Card on the specialty grocer.

The increase indicates that Amazon may be “doubling down” on its omnichannel strategy by serving up special deals to its millions of Prime members to drive visits to Whole Foods stores, inMarket said in its report. Customers also may have stepped up their shopping frequency at Whole Foods versus a year ago. 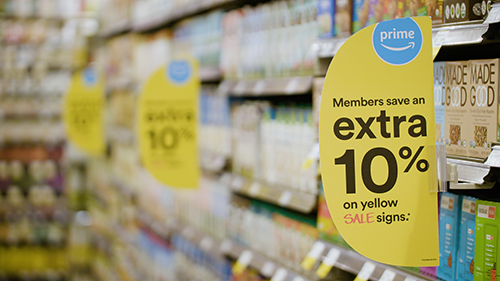 “Given the increase in total visits, it appears that Amazon Prime members are being attracted to shop at Whole Foods at a substantial volume,” said Cameron Peebles, chief marketing officer at inMarket, which uses location data to gauge customer traffic. “It’s not possible to say exactly which of the many strategies they have implemented is having the most effect, but Amazon Prime membership is likely one of the leaders.”

The foot traffic gain, however, didn’t translate into more new shoppers. InMarket’s report said the number of new visitors to Whole Foods fell 2.5% in the first quarter compared with a year ago.

“New shopper acquisition was a clear strategy for Whole Foods immediately following Amazon control, with price drops and Prime membership promotions being the focus. As these tactics matured, it likely became more difficult for them to retain the same levels of effect as they converted new shoppers into established ones,” Peebles explained. “As a general rule, it’s harder to attract a new customer than it is to retain and develop an existing one. So Whole Foods could simply be focusing on their mature shopper base.”

One omnichannel benefit being reaped by Whole Foods may be micro visits, or shopping trips shorter than five minutes. In the first quarter, micro visits at Whole Foods stores jumped 10%, inMarket said, pointing to the effect of more Amazon Lockers at Whole Foods locations and streamlined pickup for online orders, resulting in more “in-and-out” trips.

“The increase in micro visits at Whole Foods is likely a combination of factors, but the addition of Amazon Lockers at Whole Foods is a major influence,” Peebles said. “If people are stopping by Whole Foods simply to pick up their e-commerce purchases, that’s a new behavior—almost a convenience-store like behavior—and Whole Foods will need to figure out how to capitalize on these micro visit customers via different strategies than their traditional grocery shoppers.”

Rising micro visits, though, appear to be lowering the amount of time that shoppers spend in Whole Foods stores, inMarket noted. Average dwell time—the length of time spent at a location per visit—dipped 0.2% in the first quarter at Whole Foods.

“The slight decrease in shopper dwell time is most likely a byproduct of growing Amazon Locker micro visits,” said Peebles.

Brands generating the highest volume growth at Whole Foods in the first quarter were all perishables: Organic Valley (dairy), Organic Girl (salads and dressings), KeVita (beverages), Chobani (Greek yogurt) and Driscoll’s (berries), according to inMarket. “Interestingly, brands for pantry or dry packaged foods—like granola bars or cereal—were not among the top five,” the report said.

“We believe that the top five brands by growth at Whole Foods are likely a result of the type of customer who generally shops there. They’re interested in fresh products above all else, and these perishable items are likely a result,” Peebles said. “Also, shoppers are much more likely to buy their nonperishable staples, like paper towels or toothpaste, from online sources these days, which definitely impacts brick-and-mortar stores.”

In late April, Amazon reported that first-quarter sales at its physical stores—which include about 500 Whole Foods supermarkets and a fleet of Amazon bookstores, pop-ups and Amazon Go convenience stores—rose 1% year over year to $4.3 billion. That total doesn’t include sales from online orders, but Chief Financial Officer Brian Olsavsky said first-quarter store sales including the online component grew in the neighborhood of 6%.

Amazon Prime Now same-day delivery is offered through Whole Foods stores in 88 U.S. markets, and Prime Now Pickup is available at Whole Foods locations in 30 metropolitan areas. Amazon also has tried to spur online and offline grocery sales via another round of price cuts at Whole Foods, including lower prices on certain items for all customers and more weekly deals across departments for Prime members. Reductions implemented in early April lowered prices by an average of 20% on select items throughout the store.