Two weeks ago I attended 2011 VegFest Colorado organized by the Vegetarian Society of Colorado. As a vegan, it was one of the few places in Colorado that I knew I could eat absolutely everything without having to say "hold the cheese" or "can I substitute veggies?" There's something liberating about being around those who share your viewpoints surrounding food and lifestyle. 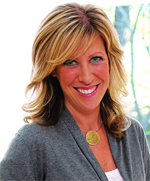 But even though vegans all subscribe to the same basic knowledge, it's amazing how one person can present the facts in a new way as if you have never heard them before.

That's thanks to Colleen Patrick-Goudreau, vegan, founder of Compassionate Cooks and author of numerous vegan cookbooks, including The 30-Day Vegan Challenge due out this August. She spoke at VegFest in a session titled "Getting to the Meat of the Matter" where she debunked these popular myths about veganism.

If you're curious about veganism, Delicious Living has lots of recipes and tips to help you get started.

Which myth is most challenging for you to overcome, and why?