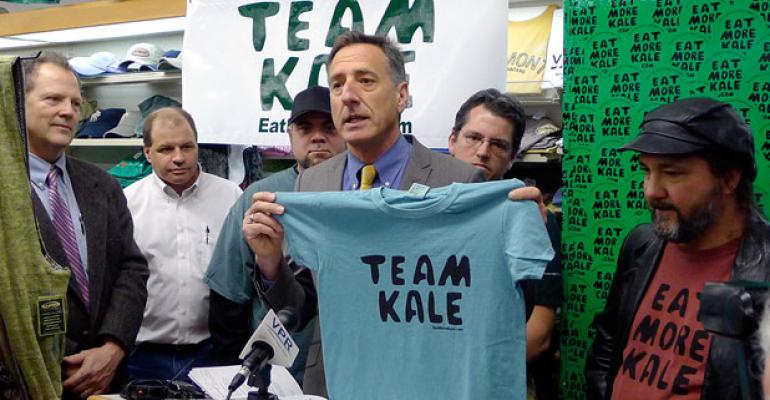 Poor vegetables. Lately, they've been getting such a bad rap. First, pizza's a vegetable and now kale is being compared to chicken. Well, at least that's what Chick-fil-A says happens whenever someone sees Vermont businessman Bo Muller-Moore's "Eat More Kale" t-shirts. On Monday, news broke that the multi-million dollar fast-food chain sued Muller-Moore for trademark infringement.

As my coworker Todd Runestad would say—file this under: seriously?

Chick-fil-A claims that the "Eat More Kale" slogan "is likely to cause confusion of the public and dilutes the distinctiveness of Chick-fil-A's intellectual property and diminishes its value." Five years ago, Chick-fil-A sent a cease-and-desist letter to Muller-Moore but the letters stopped coming and business resumed as usual. Then Muller-Moore filed for a trademark last summer, which likely reawakened the Atlanta-based company's wrath.

This is a new battle for the Christian fast food company that usually takes heat for donating to conservative organizations such as the National Organization for Marriage's Ruth Institute, a project that seeks to preserve traditional marriage between a man and woman.

So what gives, Chick-fil-A? You don't operate a single store in Vermont. The "Eat More Kale" font doesn't look like yours and the egregious spelling of "eat mor chikin" is nowhere to be seen. Not to mention the fact that "Eat More Kale" is advocating for plants and local eating, not an animal and factory farms, the source of your chicken.

But Muller-Moore isn't giving up and neither is Vermont's governor. In this video, Governor Peter Shumlin launches "Team Kale" an effort to raise money for Muller-Moore's defense fund. Shumlin tells Chick-fil-A to not interfere with Vermont's "agricultural renaissance where we're growing local food and selling it locally because more and more Vermonters care about where their food comes from, what's in it and who grew it."