Meet the next GE crop: apples that don't brown 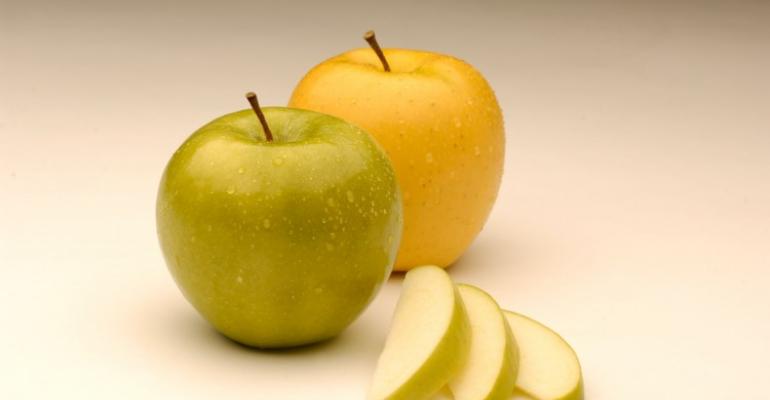 Among my concerns about our food system—declining stocks of wild fish, monocrops, biofuel production, the exploitation of farm workers, etc.—produce that oxidizes doesn't rank in the top 500.

In fact, I've never even considered it to be an issue. You, either? No worries, some of our top minds are steps ahead of us. 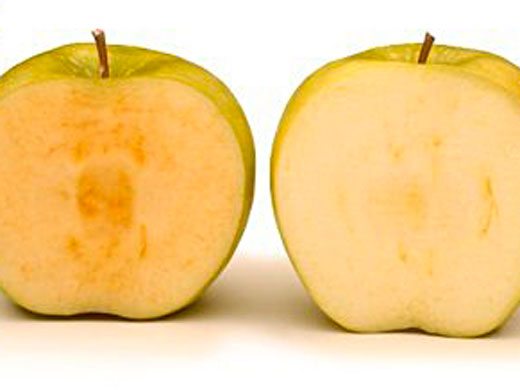 A team of scientists at Okanagan Specialty Fruits, have created the "Arctic Apple" which not only doesn't brown when exposed to air, it stays crisper longer.

Was that a collective sigh of relief I just heard? The freak, ahem, new-and-improved fruit contains a synthetic gene to reduce the enzyme that makes apples brown and may soon be available in Golden Delicious and Granny Smith varieties, The New York Times reports.

Why, you may be wondering, are browning apples an issue of public concern? Let's let OSF founder and apple-grower Neal Carter explain:

Designer apples aren't the only fruit the OSF has up its sleeve. According to the company's website, non-browning peaches, cherries and pears are also in the works.

While I support innovations that limit food waste and encourage healthier eating, I can't help but think that spending time and money to tamper with something so natural is totally misguided. Shouldn't we instead be showing consumers that real food is perfectly imperfect? Unlike Twinkies or McDonald's fries, it spoils when left out. It doesn't come in shiny, colorful boxes or a static shell. Because it changes, we know when it's rotten and when it's ripe.

Though Carter says the new gene won't make it difficult for consumers to tell when an apple has gone bad, critics aren't so sure. There's also concern about the fruit's overall image.

As consumers become more aware of the perils of genetically engineered foods, apple growers fear that introducing the GE crop could tarnish the fruit's reputation as a natural health food. An apple a day may keep the doctor away today, but could it be an orange or pear tomorrow?

“We don’t think it’s in the best interest of the apple industry of the United States to have that product in the marketplace at this time,” said Christian Schlect, president of the Northwest Horticultural Council to The New York Times.

Do you also think these apples stink? Make your opinion known.

Today, the Agriculture Department is expected to open a 60-day public comment period on Okanagan’s application for regulatory approval of the genetically modified apple trees.