VegNews under fire for using non-vegan photos in magazine

Update April 18: VegNews issued an apology and committed to only using vegan photography going forward. And they're even compiling a vegan stock photo site! Original post of the controversy in tact below. 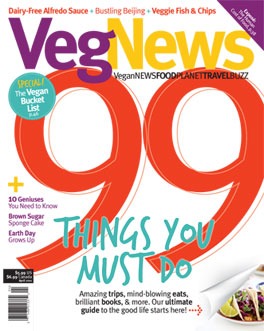 As a vegan who has frequently turned to VegNews for recipes, I was shocked to discover today that those meat-free burgers and dairy-free mac-and-cheese photos were anything but. Yesterday, the blog QuarryGirl.com posted an expose on the magazine with photo evidence showing that the images VegNews has been using in its publication are decidedly non-vegan.

To see what I mean, open both of the following links in different browser tabs:

In another set of photos, which seems to have been removed from the site, VegNews photoshopped the bones out of a Barbecue Ribs Dinner to make it Vegan Spare Ribs. In other words, that's real meat making vegans salivate. (And why aren't all the non-vegan pictures removed from VegNews' website as of the time this published? The jig is up.)

Vegan readers are outraged. Just take a look at the Twitter and Facebook response to VegNews. And now mainstream media such as The Huffington Post and NPR ­are getting into the mix. As expected, VegNews issued a response, but almost all readers' comments find the response inadequate and unapologetic.

Why VegNews said it used the photos

VegNews cited the reason for using stock photography as a last resort, "after exhausting all options" and that "In an ideal world we would use custom-shot photography for every spread, but it is simply not financially feasible for VegNews at this time."

Publishing magazines is costly. We know that here at New Hope Natural Media – we publish four of them monthly. But one commenter on the VegNews Web site said it best: "Easy to understand the need to save finances in these times. But why promote vegan cuisine using photos of dead animals?"

But there's another side to the issue. A commenter on QuarryGirl.com pointed out, "At first I was really upset about. [sic] But then, thinking about this some more, how is this any different than photoshopping 20lbs off the model on the cover of the magazine?"

At New Hope, we also use stock photography, some of which is attached to features on this Web site. However, when we publish an article about omega-3s, we attach a photo representative of omega-3s (fish or the supplement) – not, say, a photo of an apple.

This may seem a silly correlation, but that's truly how black and white eating meat is for vegans. Meat is meat. And seeing it, when you're expecting something different – especially from a company that is "dedicated to ending animal suffering" – is offensive.

Cleaning up the mess

But this is no reason to unsubscribe. OK, so VegNews screwed up (bigtime). They publicly admitted it, though they didn't offer a solution. It will take some time to find a solution that works for the cash-strapped company, but the good news is it's probably a lot less time than it takes the government to decide on a federal budget. The best suggestion I've read yet is for vegans to form a vegan stock photography Web site (hello, business opportunity!) in order to support publications everywhere that are increasingly looking for meatless and dairy-free art to accompany their vegan features.

Although I wish VegNews' statement had included a commitment to change, and that they had removed all offending stock photography from the Web site, I don't intend to boycott the magazine that has done so much good for veganism. But I may, if no change occurs.