Why you should drink dairy alternatives 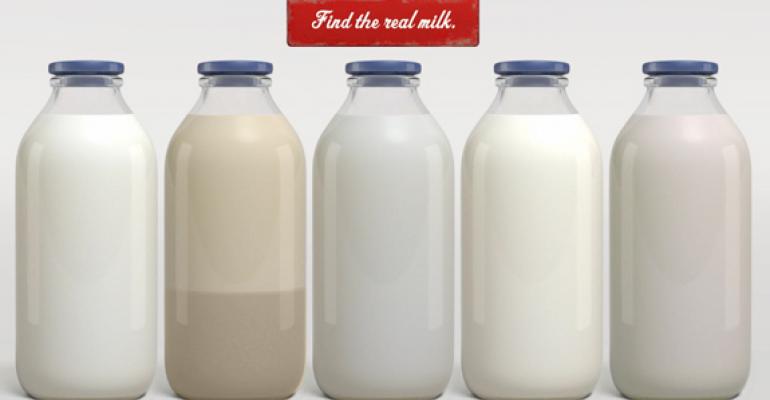 Recently, the California Milk Processor Board (the folks behind the infamous Got Milk? advertisements) unleashed a new campaign to rev up support behind dairy. Gotmilk.com, the fancy new website accompanying the campaign, reveals five bottles containing liquids of varying whiteness on it's homepage. A banner prompts the reader to “Find the real milk.” Click on soy milk and the website chides, “This came from a cow? Please.” Almond milk is described as having a “funky color,” and coconut milk is touted as being “spooky.”

While these empty descriptors (honestly, funky color? That’s the best you got?) are pretty ridiculous, the website questions the ingredients found in milk substitutes too; insinuating that these products are artificial. So let's set the record straight by examining a few of these seemingly “spooky” ingredients found in dairy alternatives.

An extract of red seaweed, this ingredient gets its name from Carragheen, a coastal town in Ireland where it has been used in foods for hundreds of years. Food-grade carrageenan (otherwise known as undegraded carrageenan) has been extensively studied, and is widely considered to be a safe, natural additive in foods. It adds a creamy mouthfeel to both milk substitutes as well as ice creams, puddings, marshmellows, etc. Degraded carrageenan, on the other hand, is not used in foods, and may have tumor-causing properties.

Popular in gluten-free baking, guar gum is a white, flour-like substance used as a thickener. It’s made from the seeds of the guar bean—a plant native to India.

Xanthan gum adds volume and viscocity to baked goods. It’s made from a microorganism called Xanthomonas campestris and is a natural carbohydrate.

Don’t get me wrong. I regularly eat dairy products like cheese and yogurt. Dairy milk is significantly more beneficial than other beverages; as both doctors and health professionals alike unequivocally recommend milk over soda, energy drinks and sugary juice cocktails. Milk has roughly 300 mgs of calcium per glass, and (as gotmilk.com helpfully points out) it aids in muscle repair, bone strength, sleep and healthy hair skin and nails. Egyptian queen Cleopatra, the website informs, even took weekly milk baths to soften her skin. (Filling a whole bathtub with milk? Talk about an increase in sales!)

But with factory farms consistently using antibiotics, growth hormones and unsavory practices to produce conventional milk, not to mention roughly 75 percent of the world’s population is unable to properly digest dairy, it may not be the goodly white liquid the new Got Milk? campaign leads you to believe.

Other options include opting for goat milk, which contains less lactose, or buying organic dairy produced by responsible companies such as Horizon, Organic Valley, or Stonyfield, whose cows eat pesticide-free food, are never treated with artificial growth hormones, and are raised in healthy, clean living conditions. Now that's what I call a happy cow.