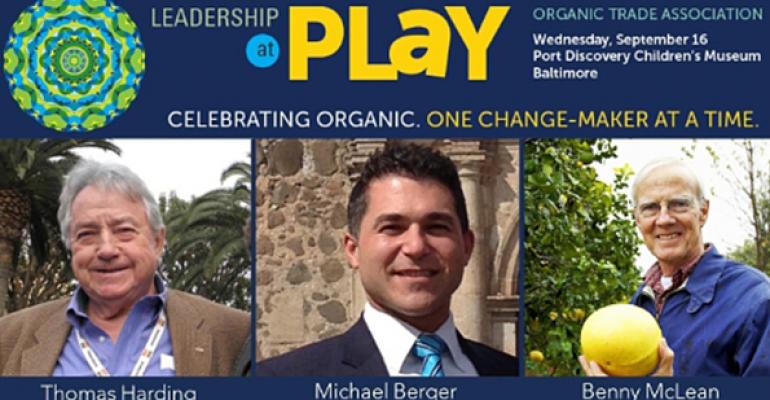 A long-time organic champion who played a key role in creating today's organic sector, an organic entrepreneur who brought organic to America's fast-food lovers, and an organic citrus grower who revolutionized our favorite breakfast juice are the winners of the Organic Trade Association's (OTA) 2015 Organic Leadership Awards.

Recognized for their outstanding work in advancing organic agriculture and trade, these three change-makers will be honored at OTA's annual awards dinner Sept. 16 at the Port Discovery Children's Museum in Baltimore as a kick-off event to Natural Products Expo East:

"This year's winners have truly changed — and are changing — the organic world, our agriculture and the way we eat through their commitment, creativity and hard work," said Laura Batcha, OTA's executive director/CEO. "We are honored that these three tireless and inspirational individuals have been nominated by their peers and chosen for this well-deserved recognition by OTA's Board of Directors."

Harding has been involved with the organic industry for more than 35 years, working directly with, or as a consultant in business development, farm management, farming and food distribution. He helped found the Organic Foods Production Association of North America (OTA's precursor) and became the founding president of the OTA Board.

A tireless worker for the organic industry, he continues to be active in furthering organic's role in D.C., with advocacy efforts on Capitol Hill and development of OTA's Organic Political Action Committee. He has been a constant monitoring force concerning standards and related regulations for organic, including the work of the National Organic Standards Board, U.S. Department of Agriculture, the National Organic Program, and Congress. He also has also been a leader at OCIA International, and the International Federation of Organic Agriculture Movements.

Harding's vision of success over the years has played a critical part in the maturation of organic as an industry.

"For over 40 years, Tom Harding has been a constant force growing the organic movement globally," said George Siemon, CEO and a founding farmer of Organic Valley. "His contributions in developing organic standards, forming our organic associations, building businesses, and working with various governments to birth organic production worldwide are unmatched in the organic community. His contributions are many and deep in every aspect of organic. I've admired and valued his mentorship."

Under Berger's leadership in establishing the Elevation Burger restaurant group, the chain has grown its organic beef supply program into the largest such program for any restaurant group in the United States and one of the largest organic beef programs of any U.S. retailer or end user. The company historically has partnered with farmers and ranchers to sponsor certification of their herds to grow its supply, resulting in a purchasing program that includes over 120 different family farms, up from 30 farms approximately five years ago.

Berger was recently responsible for leading the development and implementation of Elevation Burger's organic chicken supply program, and several years ago established the company's organic bacon program, both of which are the largest of any U.S. restaurant group.

In addition to Berger's role at Elevation Burger, he is an active voice in the organic and sustainable food industry having recently been named to The Organic Center's Board of Trustees and Food Tank's Board of Directors.

"Elevation Burger has proved that an unequivocal commitment to organic meat is not only better for people and our planet but is also good business. Michael has been a true pioneer in developing a completely organic, sustainable protein supply chain that provides our guests with not only the finest organic, grass-fed beef in the world but organic bacon and chicken as well," said Elevation Burger founder and Chairman Hans Hess.

Organic Farmer of the Year

He is responsible for converting close to 1,500 acres of citrus in Florida to organic, and assisted more than 25 small family growers to convert to organic production. He has also worked with South Lake Hospital to develop a community organic garden, and continues to consult with the individual gardeners on organic growing methods. In addition, he has assisted avocado, blueberry, blackberry and peach growers in Florida in the conversion to organic.

He has been actively involved in research to find a cure to citrus greening through grants to Uncle Matt's and with his own resources. McLean is often sought out to share his knowledge on pesticide usage, nutrient density and organic methodology.

"Benny Mclean has been very instrumental in putting Florida on the map as a source for organic citrus products, while also playing a key role in providing valuable insight into potential strategies all citrus growers, researchers and consultants could utilize in the effort to overcome the effects of the very destructive disease citrus greening, a serious threat to the future sustainability of the entire industry. Benny has happily been a mentor to numerous citrus and blueberry growers interested in organic production, and has proven what many said could not be done by making organic peach production in Florida a reality," said Gary K. England, University of Florida/Institute of Food and Agricultural Sciences extension agent for fruit crops.