Canned applause: Are canned veggies worse than no veggies?

This morning, the Internet transported me back to the 1950s. 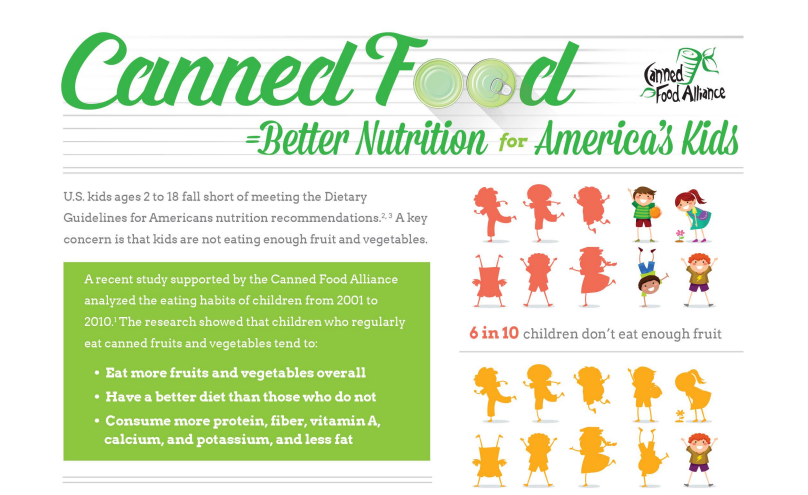 This is not quite the better-than-nothing strategy we hear with exercise—“Park at the end of the parking lot and add a few steps to your car-to-desk stroll!”—but it is clearly “better than not enough.” As a child of a single mom raising four kids in the decades after Krinkles the Clown scared children into mainlining sugar at breakfast, I know a bit about canned vegetables, and those early culinary experiences have me wondering if “better than not enough” might be among the worst things we could do.

I remember my first “real” green bean. I was in college—that age when you explore alternative lifestyle options—and my girlfriend showed me how to snap the ends off the beans and put them in a steamer. They were fresh. They were crunchy. They were delicious.

They were very much not the green beans I had been raised on. The green beans of my youth didn’t come from the produce section. They came from a shelf, and a can that more often than not carried the Del Monte label. I learned that green beans meant eerily uniform green cylinders of mush, tasteless but for the salt. Don’t even get me started on asparagus.

I wasn’t anti-vegetable, but veggies didn’t rank high on my list of food cravings. My college girlfriend and those green beans helped turn me around. My kids are growing up on green beans from the produce section (although my daughter prefers broccoli as her go-to veggie) and have never seen a limp asparagus flopping out of a can. I have shielded them from that horror. I am actually dating a vegetarian. She cooks kale grown in her garden, 30 feet from the stove.

Blaming the Canned Food Alliance for the poor diet scarfed down by America’s kids makes no sense. I know that.  Still, I fear for a nutritional lost generation. They might figure out the Happy Meal is not so happy once see their beer bellies bloat past all suck-it-in strategies, but they may never build an appetite for vegetables. I’d rather the Canned Food Alliance keep its mouth shut and perhaps support a more industry-neutral awareness of fruits and vegetables.

Both of my children’s schools have farm-to-cafeteria gardens and serve a menu planned by Renegade Lunch Lady Ann Cooper. But this is Boulder, a bubble of good nutrition. The rest of the country doesn’t eat the way we do. Or shop the way we do.

With canned vegetables as the better-than-not-enough taste test, they never will.

Address accessibility in your neighborhood
Oct 02, 2014