HomeNewsPCC Natural Markets to anchor Madison Valley mixed-use development
Recent
Latest
4 tips to get ahead of chemical concerns in packaging
May 20, 2022
7 CBD favorites in the increasingly popular gummies format
May 20, 2022
Mission MightyMe helps parents introduce allergens to babies
May 20, 2022
UNFI's Eric Dorne to step down as chief operating officer
May 20, 2022
Trending
Whole Foods' honors 30 companies with 10th annual Supplier Awards
May 18, 2022
Sponsored Content
The rise of sustainable business – eGuide
Sponsored Content
Getting ready for 2023: Trends for brands to consider
May 17, 2022
Sponsored Content
Unboxed: 7 plant-forward ice creams to stock this summer
May 10, 2022
Natural Foods Merchandiser
brought to you by 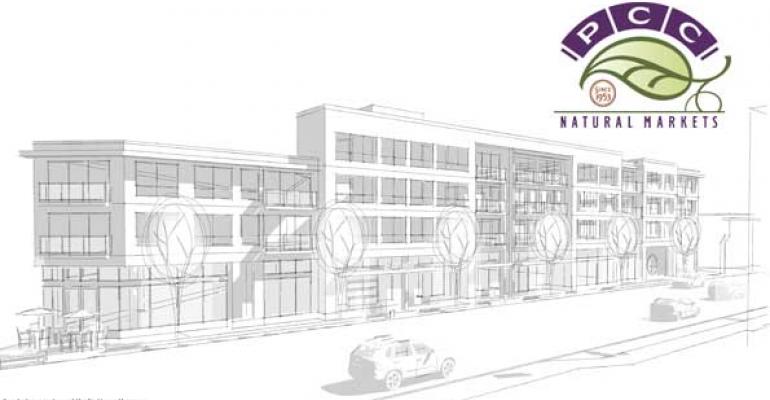 The Velmeir Companies announced that PCC Natural Markets (PCC) will anchor a proposed new mixed-use development in Madison Valley, Washington. PCC, the country’s largest member-owned natural foods market, will occupy 25,000 square feet in the new building. The project will include 75 one-, two- and three-bedroom apartments above the grocer and an underground parking garage.

“We are delighted to bring PCC Natural Markets as well as housing options for families of all sizes to Madison Valley,” said Geza de Gall, vice president of real estate and development at The Velmeir Companies. “We heard from many in the community who shared that they would like to have a grocery store in the neighborhood.” Plans for the building include a green roof, rooftop terrace and street side plantings as well as setbacks more generous than required by code. Velmeir is also constructing a mixed-use apartment building in Queen Anne.

“There is such a passion for food in Madison Valley that can be seen in the restaurants, cafes and bakeries that thrive along Madison Street as well as the continued success of Central Co-op on Capitol Hill,” said Cate Hardy, CEO, PCC Natural Markets. “We are thrilled to join such a strong community alongside Velmeir while also bringing our fresh, organic produce, high quality meats and seafood, and exceptional customer service to shoppers in Madison Park, Madrona, Leschi and the Central District.”

PCC and Central Co-op have a long-standing relationship dating back to 1978, when the former helped the latter open for business at the top of Capitol Hill. Today, Central Co-op is a community-owned natural foods cooperative and complete grocery store dedicated to sustainable practices and the Washington food economy.

Dan Arnett, Cooperator in Chief at Central Co-op said, “Part of being a co-op is uniting with other like-minded businesses to remain competitive. PCC shares our values and, together, we can make a positive impact in shaping the food landscape in this neighborhood. We’re happy to welcome PCC to Madison Valley, and excited to form a deeper partnership in the coming months.”

The project’s location is the current East Madison site of City People’s Garden Store, which recently announced the store’s closure at the end of 2016. “We share Velmeir’s enthusiasm for PCC as the anchor tenant in this project and believe they will be a terrific asset to the neighborhood on many levels,” said Dianne Casper, Co-owner at City People’s. “And we value Velmeir's track record of working with communities and their history of listening to local needs and concerns and adapting designs in response to feedback. Ultimately we believe this project, which brings a top-notch local retailer in PCC, increases the housing stock, and incorporates thoughtful design, will be a major asset for the Madison Valley community and a positive legacy from us.”

Velmeir plans to break ground in early 2017 and open the retail space and apartments in 2018. The building is designed by Charles Strazzara, partner at local architecture firm Studio Meng Strazzara.

Could a downtown location be a good fit for your natural store?
May 01, 2015