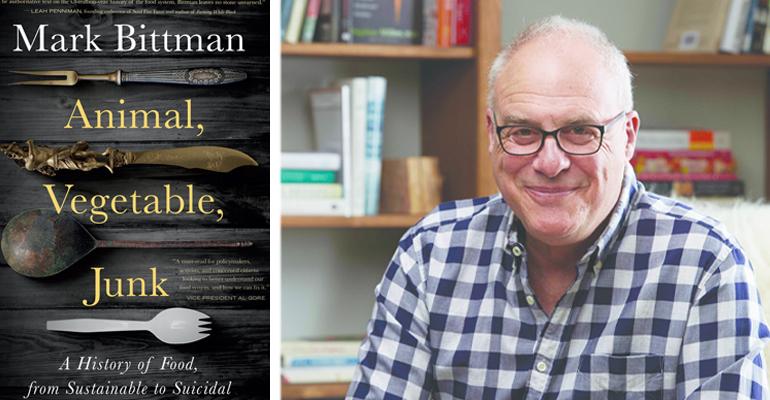 Cookbook author and food policy analyst Mark Bittman digs into the history of agriculture to explain and critique our broken food system.

Ezra Klein, who wears his admiration for Mark Bittman on his sleeve, describes Bittman's new book, "Animal, Vegetable, Junk: A History of Food, From Sustainable to Suicidal," as a "sweeping history and reinterpretation of humanity's relationship with food."

In the book, Bittman more heavily criticizes the food system. "Agriculture has, over the course of human history, gotten away with murder. With each passing century, it's gotten better at it, until it became a justification for imperialism and genocide," quotes Dan Friedman of Forward.com.

Bittman's accounting of agricultural history is deep and serious. Even he acknowledges that the necessary changes won't come soon. From opinion columns about Bittman's book and interviews he conducted this year, we compiled five of Bittman's essential points.

1. Agricultural history is the history of civilization.

"But once there were surplus, you could have priests, builders, accountants, scribes, politicians, managers, traders, and all the things that we now consider professions or jobs. That's a big change. And the fact that you started to grow food and make laws and civilization, that started 10,000 years ago, and maybe was consolidated by 2,000 years ago. That was a big, big jump."—How eating has shaped our past and defines our future, according to Mark Bittman, KCRW.com, March 27

During his March 16 podcast, Ezra Klein briefly takes the role of the casual observer, pointing out the global food system supports almost 8 billion people; food is cheaper that ever; and people like processed foods. "What do you say to convince that person there is a food system crisis?"

Bittman replies, "Close to a billion people are underfed. So we can have that discussion in a minute. But it works well for a third to a half of the people on Earth. But it doesn't work well for the most-often poorest people on Earth. And that's who's getting sick, and that's who is undernourished or malnourished.

"The public health community has screwed up by focusing on behavior change for years and decades. … Behavior change is all well and good, just like exercising is all well and good. But what do you say to the woman who's working two jobs and doesn't have a car and has three kids and just doesn't have a second to breathe? How do you tell her she's eating wrong?"—Transcript: Ezra Klein interviews Mark Bittman, The New York Times, March 16

"The most surprising statistic I came up with in the course of writing Animal, Vegetable, Junk was that 60% of the calories available to Americans today are in the form of ultraprocessed food," Bittman says.

"That's not a choice, particularly—that's what's in the market, and what's in the market is driven by what's planted, and what's planted is driven by government policy, by profits; profits are helped by government policy. The leading cause of death in the United States is chronic disease, and the leading driver of chronic disease is diet. A leading driver of problems with diet are ultraprocessed foods or junk foods. So what we grow is determining what we eat, and that's determining how we live and die."—Mark Bittman's beef with capitalism, The New Republic, April 21

"Make no mistake, this book is a call for massive reform or even revolution," writes Dan Friedman.

"'Although it's immoral and cruel, and overseen by mostly immoral and cruel people—only a few of whom were sadistic masterminds—the system is largely the result of incremental decisions, some made as far back as 10 thousand years ago, others recently," Bittman writes. "'One thing is certain: The future isn't set. There is time to change how we grow and what we eat."

"What is at stake is human survival on Earth," Friedman concludes.—Mark Bittman is calling for a revolution, Forward.com, April 1

Bittman says, "Part of the issue is that we don't teach children what real food is, and until we do that we won't have grown-ups who understand food very well. It's hard to change your food habits, which are as greatly influenced by marketers as your own parents, and your parents' habits were greatly influenced by marketers, because we're three, four, five generations into this now. Until we make a conscious decision that we're going to teach 4-year-olds where food comes from, what it takes to grow real food, what healthy eating means, we'll see adults claiming that they have a right to eat a Whopper whenever they want. They'll say anything less is deprivation. And that's not something we'll deal with tomorrow."

"I'm not saying we can't make changes, just that a lot of people would be disappointed if we mandated a 50% reduction in the consumption of animal products and a 90% reduction in the production of junk food. Yet, in 100 years, that's what the food system is going to look like or we're not going to be here."—Mark Bittman explains why the next 100 years of food will have to be radically different, Gizmodo.com, Feb. 10