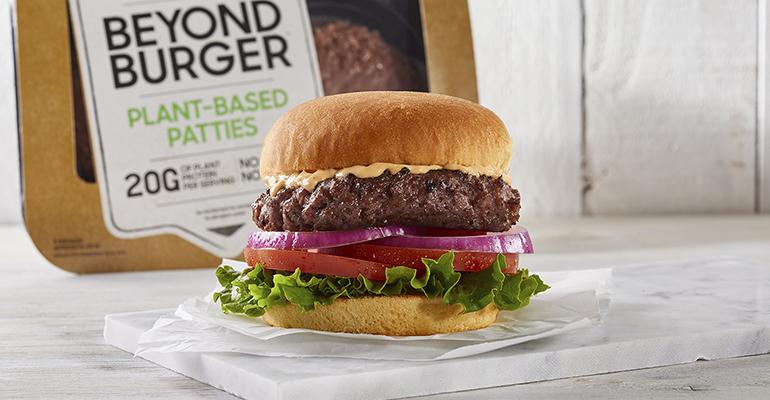 Plant-based protein company plans production facilities in Europe and Canada, has its eye on Asia this year.

Beyond Meat earned more money in the fourth quarter of fiscal 2019—$98.5 million—than it did in all of fiscal 2018—$87.9 million—the plant-based protein company announced Thursday.

"Right now is a time of growth for Beyond Meat," President and CEO Ethan Brown said during Thursday afternoon's earnings call. "Looking at our past, one could argue that's always been the case—and they'd be right, to a point. There's something different about this moment. It becomes clearer by the day that a growing number of consumers want what we are doing to work.

"The world is also rapidly changing in ways that propel this movement. The movement is increasingly intertwined with our brand—systemic pork disruption in Asia; high school kids protesting the inaction they see in regard to greenhouse-gases emission reduction; an increasing number of world-class athletes turning to plant-based eating to improve recovery and performance; and more and more members of the medical community returning to the ancient, Hippocratic understanding of food as medicine—all come to mind," he continued.

The company credited revenue increases to more sales to international customers; more points of distribution; higher sales to existing customers; and new products released in 2019. Results from the fourth quarter, which ended Dec. 31, were overall positive:

Related: Beyond Meat's next steps: Building a brand, not just products

Sales increases in fresh products in retail, restaurant and foodservice channels led to the additional revenue, according to the company's earnings announcement.

The company also exceeded its annual goals for sales, financials and operations:

Beyond Meat products are now available in more than 77,000 restaurants and foodservice outlets in more than 65 countries. Those same countries offer large opportunities for growth, Brown added.

In the United States, Beyond Meat's market share increased 830 basis points—26 times faster than the largest competing brand in the category in 2019, Brown said, attributing the statistics to SPINS, a marketing and data firm that focuses on the natural products industry. (Impossible Foods is privately held, so its sales and revenue are not available to the public.)

Beyond Meat, which has only six SKUs, offered four of the best-selling plant-based meat products in the fourth quarter—"by a wide margin," Brown said, again attributing the data to SPINS. 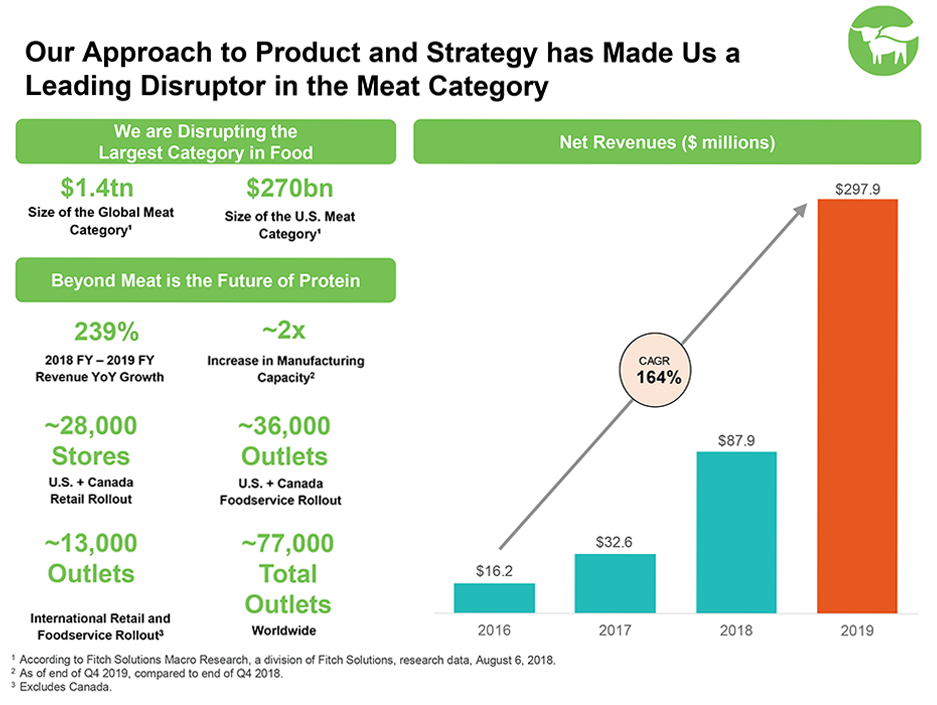 "In no way complacent, we believe that our focus on a rapid and constant improvement toward the highest product quality standards; listening to and connecting with the consumer; and avoiding GMOs and artificial ingredients continues to resonate," Brown said in the earnings call.

"To build long-term value on a global scale and size, our focus today should be on aggressive growth," he added. "Growth in terms of customers, geographies and markets; production infrastructure; innovation capabilities; product offerings; and consumer engagement—even if this comes at the expense of near-term profit and margin expansion."

The company plans to add production facilities in Europe this quarter and in Quebec, Canada, later this year. Production is Asia is in the works, also for this year, but the coronavirus crisis might affect that timeline, the CEO said.

Seth Goldman, executive chair of the board, announced at the beginning of the call that he is stepping down, effective immediately, but will continue to serve as chairman of the board. When questioned further, he explained that Brown now has a leadership team of talented people to support him and the company's growth.

"As a distance runner, I would say we are off to a strong start," Goldman said. "But this is a marathon, and we are still in the early miles. We've got the right talent, the right mindset and I believe we are better prepared to navigate the terrain than any other team."

Beyond Meat's initial public offering was in May, when it offered more than 11 million shares of common stock for an IPO price of $25 per share. During after-hours trading—following the late-afternoon earnings announcement—the stock fell slightly and was trading at $105.72 per share.