HomeNewsFlaxseed linked to lower blood pressure
Recent
Latest
Getting ready for 2023: Trends for brands to consider
May 17, 2022
EXPO VIDEO: How did a young sparkling water brand get licensing deals with Marvel and Disney?
May 16, 2022
Beyond Meat's product launches lower Q1 profits
May 16, 2022
Sponsored Content
Exploring the CBD gummy revolution – article
Trending
Debra Stark’s light shines bright on natural products industry
May 10, 2022
Unboxed: 7 plant-forward ice creams to stock this summer
May 10, 2022
Hemp CBD industry struggles so far in 2022
May 10, 2022
Monitor: Consumer research on collagen shows how much education is needed
May 12, 2022 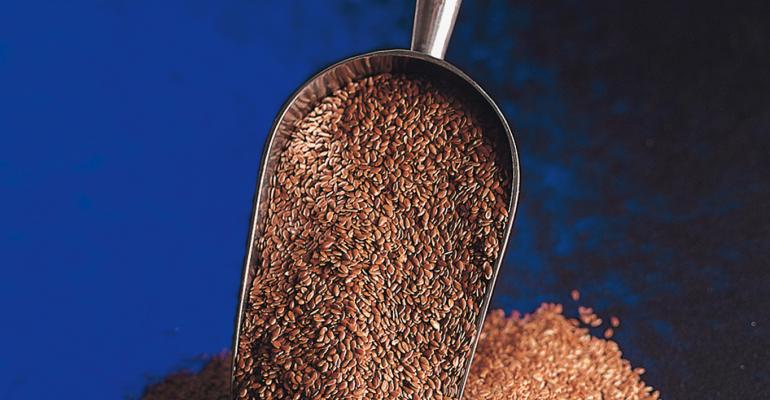 Adding flaxseed to the diets of patients with peripheral arterial disease&nbsp;resulted in large drops in blood pressure after six months, according to a double-blind, placebo-controlled study.

Adding flaxseed to the diets of patients with peripheral arterial disease (PAD) resulted in large drops in blood pressure (BP) of 10 mm Hg systolic (SBP) and 7 mm Hg diastolic (DBP) after six months, according to the results of a double-blind, placebo-controlled study. The significant findings were presented at the November American Heart Association 2012 Scientific Sessions held in Los Angeles.

“This is the largest decrease in blood pressure ever shown by any dietary intervention – including the Mediterranean Diet and low-sodium diets,” says Dr. Grant Pierce, leader of the study and executive director of research at St. Boniface Hospital. “We expect that this kind of improvement in people with hypertension could reduce their incidence of heart attack and stroke by 50 percent.”

Subgroup analyses of only the PAD patients with hypertension showed a greater reduction in SBP, of about 15 mm Hg, in these patients than in the study population as a whole and a similar reduction in DBP, he noted.

“These results are good news for the flax industry”, says William Hill, president of the Flax Council of Canada. “Demand for flax will continue to grow as evidence of its health benefits increases.”

“Consumers have embraced flax for decades, but they are not always aware of its many health benefits,” says Hill. “Research like this lends scientific support to what the flax industry and nutritionists have been saying all along, that flax has an important role to play in the health of individuals.”

The investigators chose to study flaxseed because animal studies have shown it has anti-atherogenic, anti-inflammatory, and antiarrhythmic effects and may reduce circulating cholesterol and trans-fatty acid levels. The flaxseed was provided by Glanbia Nutritionals.

Investigators randomized 110 patients with PAD and an ankle-brachial index (ABI) <0.9 to milled flaxseed (30 g/day) in the form of bagels, muffins, and buns (n=58) or placebo products (n=52), made from wheat with a similar flavor, for one year.

Baseline characteristics were similar between the two groups, with hypertension being highly prevalent—around three-quarters of the PAD patients had high blood pressure, and 80% were taking antihypertensive medications. BP measurements were based on an average of three readings taken in the sitting position with a mercury sphygmomanometer by a trained nurse.

“We obtained an important decrease in SBP and DBP using flaxseed compared with placebo”, Dr. Peirce observed, noting that the reductions were statistically significant (p=0.04 for SBP and p=0.004 for DBP). SBP in the placebo group increased by ~3 mm Hg and DBP remained the same over the six-month period.

"Flaxseed has different components, including alpha-linolenic acid, enterolignans, and fiber, and all have been shown to decrease BP. We think we are seeing a synergistic effect of different compounds," he commented.

The Flax Council of Canada predicts the study will not only help to increase demand in Canada where the Council has been working with regulators regarding a potential Health Claim for flax but will also expand the commodity’s reach in important export markets like India, Japan and China, where the incidence of cardiovascular disease is rising.

The study was led by the Canadian Centre for Agri-Food Research in Health and Medicine (CCARM) centered at St. Boniface Hospital.  Funding was provided by Agriculture and Agri-Food Canada, the Flax Council of Canada, Canada Bread, the Agri-Food Research and Development Initiative, the Canadian Institutes of Health Research and St-Boniface Hospital Foundation. Administrative support was made available by the Canola Council of Canada through the Canadian Agri-Science Clusters initiative.