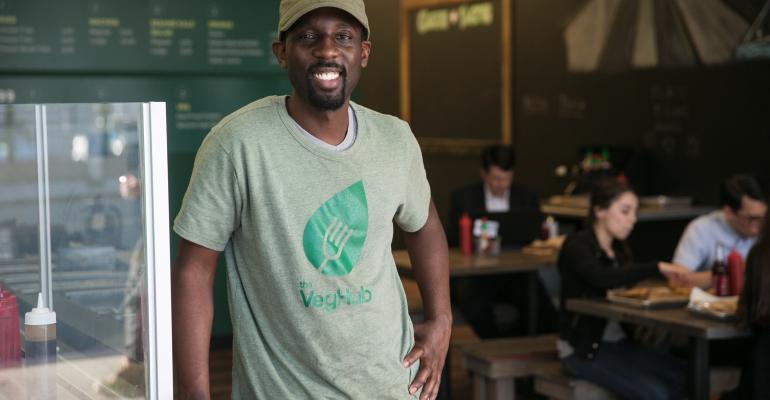 What do you do when food options in your community include fast food chains and liquor stores? If you're GW Chew, you open an all-vegan food restaurant next door to the McDonalds.

Chew, or "Chef Chew" as he goes by, is the founder of The Veg Hub in Oakland, California. Opened in 2016, the vegan restaurant is a nonprofit born to bring affordable, plant-based comfort foods to East Oakland—an area that could be considered a food desert. Chew also offers cooking demonstrations and supports community events at The Veg Hub—a place where food like he cooks didn't yet have a presence.

Related: A conversation with GW Chew: How the natural products industry can better serve people of color

Four years later, the McDonalds has shuttered but The Veg Hub stands strong and became what Chef Chew says is a blessing for the community.

"The way we eat in this country is 100% a social justice issue," Chew says in a video from last year by mercyforanimals.org. He explains how areas like Oakland, which has been experiencing gentrification in recent years, is a prime example of the connection between food access, meat consumption and health outcomes in Black communities throughout the United States.

As a Black man, Chef Chew stands out in the natural products industry. He also knows that the places his products are sold, like Whole Foods Market, is not where his friends and family buy their groceries. He recognizes there's much more work to be done around food equity, starting with addressing issues of racism in our broader communities.

Chew is leading a conversation on racism in food on Wednesday, June 24 as part of the American Sustainable Business Council’s Race and Equity Dialogue Event.

Watch this video to hear Chew explain how systemic racism and food deserts are intertwined.

A conversation with Randy Jackson: How the natural products industry can better serve people of color
Mar 05, 2020

A conversation with Kareem Cook: How the natural products industry can better serve people of color
Mar 10, 2020