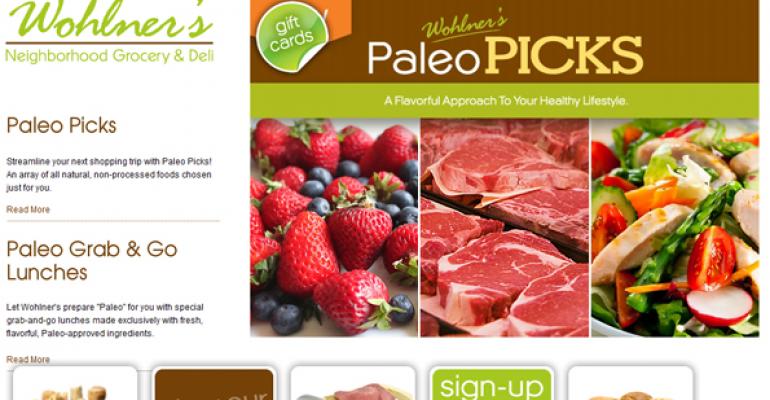 As the paleo way of eating continues to gain traction, one retailer has launched a paleo promotion to highlight its natural foods selection.

Omaha, Nebraska’s Wohlner’s Neighborhood Grocery and Deli recently launched its Paleo Picks program and Paleo Grab & Go Lunches to tout how its health-conscious offerings align with this eating trend. The new initiative also sets the retailer apart in a market that has recently seen an influx of natural foods stores.

“In just over a year, two Natural Grocers by Vitamin Cottage stores and an Akin's Natural Foods Market have opened in Omaha. Healthy foods have been a growing area of emphasis for many grocers, too. Hy-Vee, for example, has seen so much growth in product selection and demand the last few years that it has expanded the square footage of its Health Market sections, first opened 13 years ago,” the Omaha World-Herald reported.

Wohlner’s announces the paleo connection on endcaps and throughout its promotions, but the marketing team, dietician and owner note the diet’s connection to clean eating and mass appeal for customers ranging from athletes to diabetics.

April 30, 2014 · Omaha.com · Wohlner's Neighborhood Grocery & Deli at Midtown Crossing is launching items in line with the Paleo diet, which focuses on meats,...
Open this article