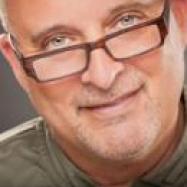 Chef Steven Petusevsky is nationally known as a pioneer in the pairing of health and exceptional taste. His culinary studies have taken him across the globe in search of innovative and authentic cooking techniques. Robust earthy flavors and vibrant cuisines capture the influence and unique reinterpretations of the ethnic dishes he is famous for creating.

Chef Steve was the National Director of Creative Food Development for Whole Foods Market from 1990 to 2002. He wrote the book on natural foods, quite literally. He is the author of The Whole Foods Market Cookbook – A Guide to Natural Foods with 350 Recipes published by Clarkson Potter in fall 2002.

Since 2002, he has worked as an outside resource and industry consultant to innovate or create food service programs for major retail and restaurant chains and institutions including Google, Lettuce Entertain You Group, UCLA, UMASS, Roundy’s, Mariano’s and Lucky’s Markets, among others. His passion and expertise in “plant forward” and Mediterranean-inspired cuisine remains the central focus of his work.

Petusevsky is a celebrated food journalist. His monthly column entitled Inspired Vegetarian for Cooking Light Magazine ran for more than four years and he continues to write special features for the magazine. His weekly syndicated column Vegetarian Today, written for The Chicago Tribune news service, was published in hundreds of newspapers across the nation for more than a decade. His work has also been featured in Health, Fine Cooking, the LA Times Syndicate, Food & Wine and Restaurant Hospitality.

His recently published books, The Diabetes Vegetarian Cookbook and Sizzle and Smoke: Diabetes Friendly Recipes for Charcoal, Gas and Stovetop Grills were published by the American Diabetes Association in 2013 and early 2014.

Petusevsky is currently a member of the Menus of Change Advisory Board for the Culinary Institute of America (CIA) and is co-chair of the CIA’s new Appetites & Innovation initiative, a national leadership collaborative created for the purpose of advancing culinary excellence, health and wellness, sustainability and cultures of innovation in retail foodservice.

Well-prepared: Choose one great dish to stand out from the competition
Apr 03, 2020
Be aware of food trends, but don't let your foodservice offer what's available everywhere else.

Well prepared: Chef Steve Petusevsky’s food program tips and tricks
Jan 15, 2020
Before you add foodservice to your retail shop, learn from an expert the best way to prepare.

Tell your food story with prepared foods
Dec 12, 2016
Involve mission and marketing to help customers understand the thought and effort that goes into your foodservice offerings.

How much space does my store need for foodservice?
Aug 09, 2016
When assessing your space, look at it in tiers, much like you view other aspects of your business.

4 steps to crafting a well-balanced prepared foods menu
May 13, 2016
Your foodservice menu is one of the most important programs you will ever create. It is founded upon what I call the “menu matrix”—the core from which every single item, from prepackaged dinners to hot-bar entrées...

Options and advice for introducing foodservice to your retail space
Apr 15, 2016
We’re experiencing a time of major industry upheaval, and competition is fiercer than ever. Since any given grocer carries produce, meat, dairy, seafood and staples, it’s critical to find ways to stand out in today’s...