For mothers who can't or choose not to give their babies breast milk, here's another option. How about milk from dairy cows that's been genetically modified to mimic what comes from humans? That's right. Chinese scientists recently achieved this freak of nature by introducing human genes into 300 dairy cows. 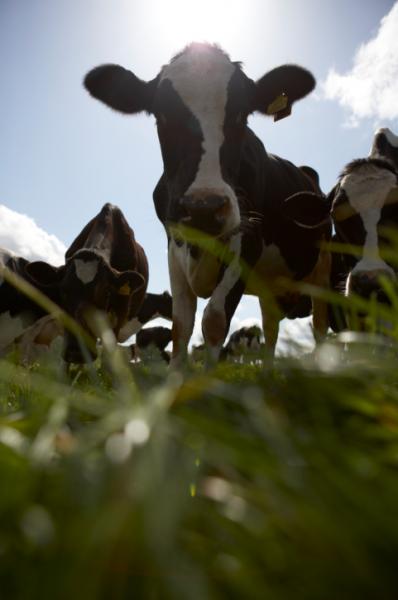 The GM-baby milk contains lysozyme, an antimicrobial protein found in human breast milk that helps protect babies from bacterial infections.  Researchers hope to market the product as a more nutritious alternative to formula and have it on store shelves within the next 10 years.

Brilliant, eh? How about, horrifying?!

China and the U.S. may still have their heads in the sand when it comes to GM foods, but Europe got the message long ago. The foods aren't allowed on store shelves because there's reason to believe they're seriously bad for us. In many studies, after eating GM foods animals developed digestive problems, allergies, became infertile and in some cases died. It's not hard to imagine how these foods, which debuted on the U.S. market in the early '90s, are playing a role in Americans' increasing health woes.  Researchers at the National Institutes of Health found that more than half of all U.S. residents tested positive for allergies in 2007—that's more than double that did in 1970. Can you imagine how GM cow milk could potentially harm a baby's development?

Breast milk from a human is better option than formula for several nutritional reasons. Infants receive millions of living white blood cells to fight infections, hormones and enzymes to help with digestion, omega-3 fatty acids which support brain development and other valuable vitamins and minerals. Lysozyme is just part of that equation.  Do researchers believe that the addition of this protein in cow's milk will really make it similar to what nature has already perfected? If Lysozyme is so essential, why can't it just be put in formula?

The motive for this science is not to support the health and wellness of infants but to make money—duping parents along the way. What's next? Cow genes inserted into humans to increase our milk supply? If we do that, my only request is that the milk be chocolate.