It's not too late to stop GMOs 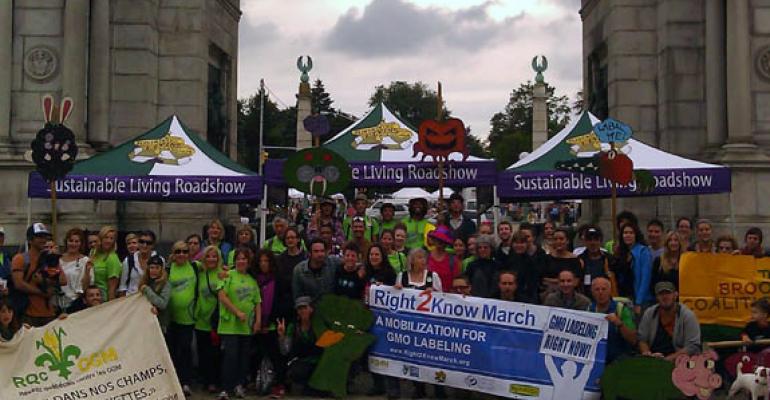 When you become involved in reporting about or advocating against genetically modified food, it's natural to become overwhelmed at the immensity of the issue. What follows is one of two things: giving up or fighting back.

I'm committed to fighting back by buying organic and continuing to be a voice for organic here on NewHope360.com. But there are times when, even in the midst of great news, it's hard to imagine a world without GMOs.

The great news I'm talking about is the GMO Right2Know March on Washington, which kicked off Oct. 1 and runs through Oct. 16, ending at the White House. It's the first march of its kind in America that addresses Americans' right to demand labeling of all GM foods.

When you look at the fast facts from a story I wrote today about Rodale Institute's 30-year Farming Systems Trial, it's mind-boggling that we even need to convince those in government that GM foods aren't good for our future. The study, which began tracking GM soybean and corn in 2008, found that those farmers ended up using more pesticides, when the assumption was they could use less due to the genetic modification. More pesticides lead to more ground water pollution, more soil depletion and therefore more pollution due to creating nitrogen-rich fertilizer.

At the very least, from an environmental perspective, you'd think Big Ag and government would get the hint.

Here's where my hopelessness kicked back in. On the phone with Elaine Ingham, chief scientist, Rodale Institute, it occurred to me that perhaps GM has doomed organic. Even if consumers are voting with their dollars for organic, and marching on Washington for labeling, isn't there so much contamination that soybean and corn crops could never go back to 100 percent organic?

Turns out, Ingham says it's not a matter of if, it's a matter of when. "If you go organic you can easily and rapidly clean up [the soil]," she said, in sometimes as little as three months according to their data. "It doesn't seem to take more than a growing season for us to get the proper biology into the soil and decompose all of the GM sequences that are left behind."

Hope restored! In order for that to happen, though, we have to as a nation say, "No more GMOs." Or, as a start, "No more GMOs that I don't know about in my food." It's not too late to get involved in the GMO Right2Know March and help make this happen.