HomeNewsUSDA reports local food farmers reap $5 billion in sales
Recent
Latest
Innovation at Milkadamia is a weekly exercise
May 27, 2022
Sponsored Content
Are there potential carcinogens swimming in your biobased laundry detergent? – article
Rowdy Mermaid disrupts functional beverages with science-based innovation
May 26, 2022
Monitor: Environmental claims confuse consumers—even natural shoppers
May 26, 2022
Trending
Getting ready for 2023: Trends for brands to consider
May 17, 2022
Natural beauty market trends
Jun 16, 2021
The Planting Hope Company aims to prove gender equity leads to success
May 23, 2022
Podcast: What brands need to get on shelf at Fresh Thyme Market
May 24, 2022 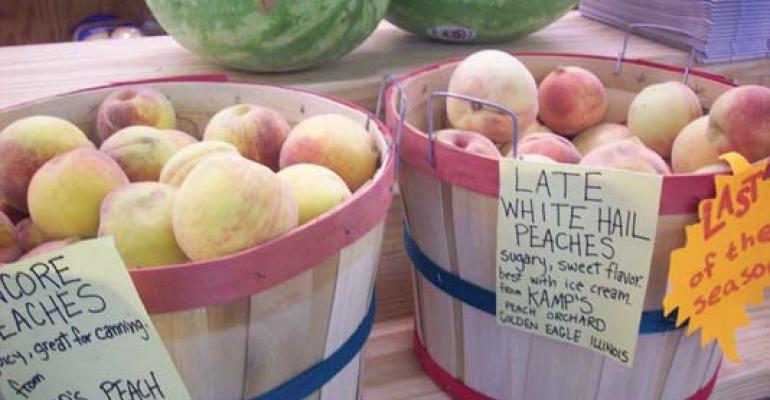 Locally-grown food is a $5 billion business for American farmers, according to a new USDA report. While concerns for the environment and food growers are motivators, so is an important economical incentive: job creation.

The latest sales numbers surrounding local food may prove the movement isn't a fad or simply a choice for the environmentally conscious. A new report from the U.S. Department of Agriculture's Economic Research Service (ERS) found that local foods netted American farmers $4.8 billion in 2008.

But the growth of farmers' markets or CSAs isn't the only factor at play: About 50 to 66 percent of all local food sales (called intermediated sales) come from grocery stores, restaurants and other retailers. Both direct-to-consumer and intermediated sales are captured together in this report for the first time. The ERS report did not designate between organic and conventional farms.

Although the $5 billion number sounds big, it represents just two percent of American agricultural sales, according to NPR, with sales of large commodities such as corn accounting for the rest. In comparison, local food revenue in 2008 was dominated by a large amount of vegetable, fruit and nut farms. These farms operate fewer acres, while generating higher gross sales per acre than field crops or livestock farms, according to the report.

Local food is commonly defined as food that's grown, distributed and sold within a radius of several hundred miles. But local doesn't necessarily mean small, says the USDA. Farmers captured in the report ranged from grossing $50,000 to more than $250,000 in sales. These local food farmers were also clustered in the Northeast and the West Coast regions and areas close to densely populated urban markets.

In 2009, research group Mintel reported that one in six adults said buying local is a priority. In the same year, the USDA launched "Know Your Farmer, Know Your Food," a national campaign to strengthen local and regional food systems. While 17 percent of American adults may be the consumers driving local forward, the government also clearly has an interest in creating new income opportunities—and jobs—for agriculture.

In fact, one out of every 12 jobs in the United States is associated with agriculture. The ERS report found that local fruit and vegetable farms employed 13 fulltime workers per $1 million in revenue earned, for a total of 61,000 jobs in 2008. In comparison, fruit and vegetable farms not engaged in local food sales employed only three fulltime workers per $1 million in revenue.

But because the USDA has not reported intermediated local sales until now, perhaps local food has been more prevalent in our food supply than previously thought. Retailers ranging from Whole Foods to Wal-Mart are cashing in on the local food craze in order to reduce costs and provide fresher food to their stores. (See 4 ways to go local at your natural foods store.)

Could the local movement also be influenced by health concerns? This year, the Environmental Working Group's Meat Eater's Guide To Climate Change + Health ranked lentils, tofu, beans and broccoli as more climate-friendly foods than lamb, beef, cheese and pork. Good news for those fruit, vegetable and nut farmers that capture the majority of local food sales.

Perhaps health is another reason why Nathan Lyon of PBS's Growing a Greener World, told Delicious Living magazine that the #1 sustainable food choice is shopping your local farmers' market; not only to support local farmers and cut down on greenhouse gas emissions, but to eat healthier and in season.