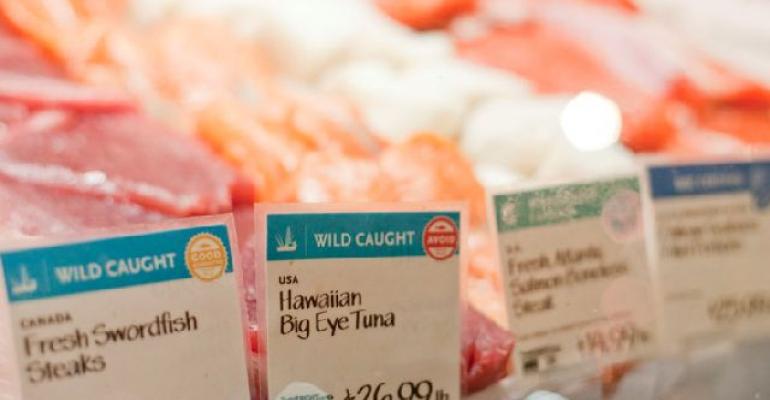 For the health of the oceans and the potential for increased consumer education, natural products retailers applaud Whole Foods Market&#39;s recent announcement to only carry Monterey Bay yellow- and green-rated seafood species. Will this move level the seafood playing field?

Despite the potential for increased competition, natural products retailers say they're behind Whole Foods Market's recent decision to stop selling fish caught from depleted waters or using methods that harm other marine life or habitats.

On Friday, the Austin-based natural foods chain said starting this Earth Day, April 22, it will no longer carry seafood classified as "red" by the Blue Ocean Institute and Monterey Bay seafood rating system. Among the species that will no longer be carried are Atlantic halibut, Atlantic grey sole, octopus, some swordfish, some tuna, wild imported shrimp and trawl-caught Atlantic cod.

Many natural products retailers said the move could help them extend their education efforts on the importance of sustainable seafood, and welcomed the potential of increased competition from the store.

"They're stepping up to the plate to do the right thing," said Debra Stark, owner of Debra's Natural Gourmet in Concord, Mass. "Does it increase competition, yes. But I don’t think there's anything wrong with competition. I like to think there's enough business for us all out there, and we can just compete and beat the pants off of them."

In a March interview with Natural Foods Merchandiser, Paul Greenberg author of Four Fish: The Future of the Last Wild Food called on retailers to stop selling unsustainable options. Doing so he said, could have a profound impact on the health of the world's oceans. Greenberg suggested stores stock smaller fish options such as anchovies, smelts and sardines which have much less of an environmental impact.

Over the past year, a number of retailers have tried to answer the call for more sustainable options. In its 5th annual retailer seafood sustainability report, Greenpeace polled 20 retailers on their commitment to sustainable seafood. To many people's surprise, Safeway captured the top spot. Among other things, the Pleasanton, Calif.-based retailer launched several progressive initiatives including a canned tuna policy to embrace pole-and-line and FAD-free fish and eliminate canned yellowfin.

The report listed Whole Foods in fourth place after Safeway, Target and Wegmans. Many have questioned when the retailer's focus on ethically-sourced food, including a commitment to organic produce and humanely-raised meat, would extend to the seafood case.

"We're excited to see Whole Foods finally making this commitment," said Lisa deLima, vice president of grocery at Mom's Organic Market, a three-store chain in Virginia and Maryland which only sells Monterey Bay green-rated and "best choice" seafood. "We see a lot of confusion in customers who shop with us and at Whole Foods. We commonly hear things like, 'Whole Foods sells tuna, why don't you have it?' Now we'll hopefully be on the same page."

"I've been following Whole Foods for years," said Randy Hartnell, a former salmon fisherman who founded Vital Choice, a supplier of sustainable seafood and fish oil supplements. "While they were promoting sustainability, they've been selling red-listed fish for years. Obviously, it's very profitable. Some of these species are profit pipeline. I imagine that it's pretty hard to give that up when you're a publicly traded corporation."

Others question if adopting the Monterey Bay Aquarium's rating system is enough.

"We encourage an open approach when it comes to responsible sourcing rather than relying on any broad brushed labeling system," said Randy Eronimous, vice president of marketing at Trident Seafood, which supplies sustainable Alaskan seafood. "Retailers should have conversations with suppliers about fishing habits and explain options to consumers rather than relying on a color-coded and likely confusing system."

Whole Foods will continue to use the Marine Stewardship Council, a non-profit that encourages sustainable fishing practices, to certify seafood from sustainable fisheries. Shrimp, salmon and other farmed fish are certified using Whole Foods own Quality Standards for Aquaculture label, which the store says was developed with help from scientists and environmentalists.