Where to dine when you're in Anaheim for Expo West 2011

Anaheim, California—restaurant  mecca? Maybe not, but the choices keep getting better, and Orange County has something for everyone, from vegetarians to seafood fanatics to ethnic cuisine purists. Below, Anita Lau, food writer, blogger and reviewer of hundreds of Orange County eateries, suggests her favorites not far from the convention center.

Anaheim and nearby Garden Grove

An Anaheim institution, the White House serves northern Italian fare with flair under the helm of chef Bruno Serato. The restaurant has received a Wine Spectator award for its diverse vintages every year since 2001.

The menu here is simple: ramen, ramen and more ramen. Kappa Ramen offers seven different types of the noodle, including Tokyo style with a soy-sauce base, Sapporo style with a rich miso base and Kyoto style with a pork broth. The menu also delivers standbys such as fried rice and noodles, along with the more exotic gyoza and chicken karaage—a kind of Chinese fried chicken—which Lau says is “crispy on the outside while moist and tender in the middle.” 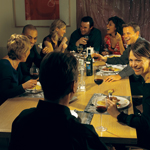 Combining European sauces with Asian spices, Roy’s specializes in seafood and sushi but also offers a wide range of items, including a gluten-free menu. “I ate there recently and thought the miso butterfish was amazing,” Lau says. Best of all, it’s located only minutes from the convention center.

Located in the Hyatt hotel, this new restaurant features traditional Tuscan dishes made from local California food—thus the name, a combination of Tuscany and California. “The prosciutto pizza is outstanding, and the spinach gnocchi is delicious in its simplicity,” Lau says. There’s also a kids’ menu and an open kitchen so diners can watch the chefs at work.

Zait & Zaatar is new on the Anaheim dining scene and specializes in healthy and natural Middle Eastern cuisine that’s made fresh daily. In addition to standbys like falafel and shawarma, Lau recommends the thin-crust Lebanese pizza.

Further afield (but not too far)

Run by executive chef and raw foods guru Jenny Ross, 118 Degrees (named for the temperature at which raw foods begin to lose their nutrient enzymes) serves what Ross calls “the freshest gourmet living cuisine.” Those searching for steak tartare should look elsewhere, as the menu is entirely plant based. Orange Coast Magazine rated 118 Degrees “best vegan date spot” in 2010; with specialties like coconut ceviche and mole enchiladas with chipotle “cheese” (made from sprouted nuts and seeds), it’s easy to see why.

Located eight miles south of the convention center, Au Lac offers a unique take on Vietnamese cuisine. The menu is completely vegetarian, with soy-based meat and an extensive raw-foods section. “It’s healthy and ethnic at the same time, and the food is really creative,” Lau says. The restaurant’s pho soup in anise broth is one of her favorites. Au Lac was selected as best vegetarian restaurant by Orange County Weekly.

Bluewater Grill, which sits right on the ocean in Newport Beach, is not just famous for its views. Voted best seafood restaurant in the OC Register readers’ poll, Bluewater’s menu changes daily.

There are plenty of Indian restaurants to choose from in the OC, but one of the most celebrated is the Clay Oven, which the Los Angeles Times praised for “innovations such as mango corn soup, braised lamb shank with fresh herbs and crab idli (a South Indian steamed bread).”  The Indian cuisine here is seasonal, creative and full of flavor, with new twists on old favorites, such as habanero vindaloo, tandoori jerk chicken and mozzarella and sun-dried tomato naan.