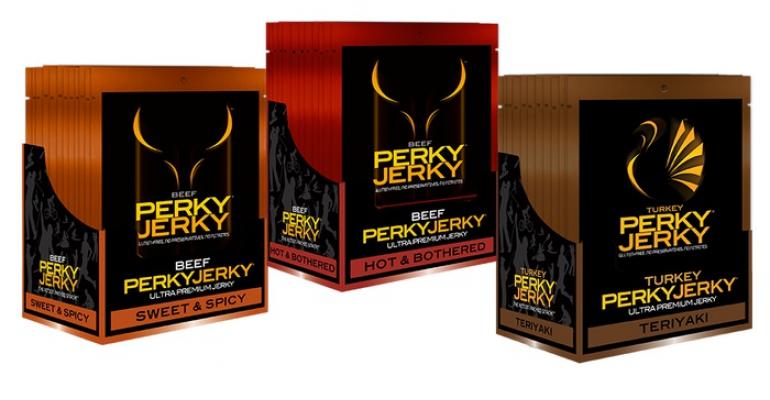 Perky Jerky, the best tasting jerky on earth, landed in over 220 high-end specialty retailers and supermarkets across Japan and South Korea in October 2014, with plans to be in China by January 2015. Its American ultra-premium turkey jerky line has experienced strong sales in its first several weeks in both Japan and Korea, with projected sales in the two countries alone to hit $3 to $5 million in the next year.

Global snacking accounts for $374 billion in sales, and health-minded consumers are driving growth in non-sugary, meal replacement type of snacks [Nielsen, September 2014, “Snack Attack” report]. Perky Jerky recognizes great potential in the Asian market with its ultra-premium, all natural, healthy profile and the fact that turkey is considered a delicacy in Asia. Based on jerky’s trajectory as one of the fastest growing snacks in the U.S. along with the globalization of foodie culture, the brand is primed for success.

U.S. brands continue to proliferate throughout Asian markets based on Asian consumers’ affinity for American culture and products. In 2007, American brand Krispy Kreme attracted 10,000 customers to its first Japanese shop in just three days, and is now sold in 50 locations across Japan. Vita Coco, a leader in the coconut water trend, is available in Japan and Korea, and will soon be distributed throughout China. Looking to the future, iconic coffee brand Starbucks plans to open 100 more stores in Japan during fiscal year 2016.

“Perky Jerky is proud to be the first American ultra-premium jerky brand to enter Asia, a coveted marketplace with tremendous potential,” said Brian Levin, Founder and CEO of Perky Jerky. “We are looking forward to building our business in Korea, Japan and China, and collaborating with our partners in each of those regions.”

Over the past year, Perky Jerky has closely studied the market, met with distributors and other influencers in the premium foods business, and learned about the important and stringent health code standards. Based on these learnings, the brand is now on shelves of some of the most well-respected retailers in both Japan and Korea, including Nissin, National, Medi-ya, Sakagamis, Plaza, Shinsegae, Star Market and Dean and Deluca, as well as bars and pubs across Japan. Perky Jerky’s popular turkey flavors of Hot & Bothered, Teriyaki, Sweet & Spicy and Original are available at these locations, with Jamaican Style flavor launching soon. The brand is also currently developing custom local in-market packaging in the respective languages.

The Jerk Man, the brand’s legendary mascot, has already created plenty of excitement amongst shoppers in Japan and Korea, providing a memorable experience for consumers. In keeping with the brand’s edgy and innovative marketing initiatives to date, Perky Jerky plans to launch unique, out-of-the-box brand experiences in each of the Asian markets.