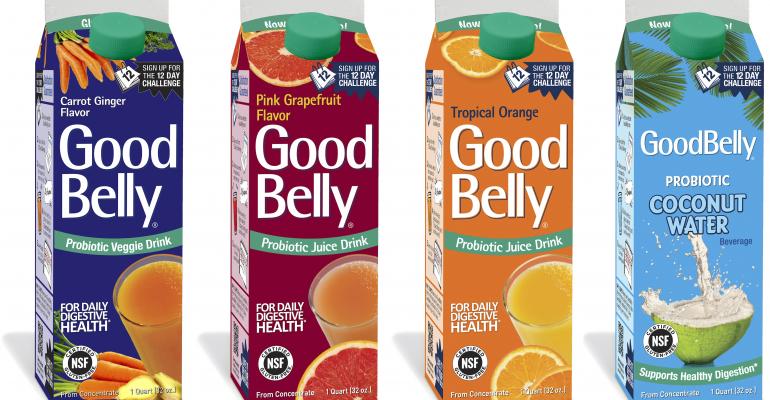 GoodBelly experienced another year of double-digit growth and anticipates a consistent progression over the next 18 months.

According to new research from MarketsandMarkets, the digestive health ingredients market in the U.S. is projected to be $495.3 billion by 2015, up from $265.9 million in 2010. Sales of GoodBelly, a line of probiotic beverages formulated for daily digestive health, are mirroring this booming health trend, and the company has an aggressive growth strategy in place to double its annual retail sales by the end of 2015. In the last year, GoodBelly has experienced another year of double-digit growth, and anticipates a consistent progression during the next 18 months. The company will be showcasing its line of innovative probiotic beverages at Natural Products Expo West at booth number 3974.

“Consumer awareness about probiotics in the U.S. and digestive health continues to spread, and we know one of the reasons growth of GoodBelly continues to accelerate is because we deliver on a real promise,” said GoodBelly CEO Alan Murray. “With a product like probiotics, feeling is believing—an overwhelming 83 percent of our consumers report feeling the benefit, and 71 percent of them are still buying GoodBelly a year later. In a time where many retailers are looking to ramp up their sales in an overall stagnant beverage category, we’re thrilled to meet that challenge and consumer demand with innovative probiotic drinks that have proven health benefits.”

GoodBelly beverages use the exclusive probiotic strain, Lactobacillus plantarum 299v (LP299V®), from Swedish probiotics supplier, ProBi, which is also used in the most popular probiotic product in Sweden. In order to reach its goal of $50 million in sales by 2015, GoodBelly is focusing on an increased push in distribution, adding up to 5,000 new retail doors in addition to strategic plans for new consumer acquisition.

GoodBelly probiotic drinks are non-GMO, dairy-free, soy-free, vegan and kosher, with several new gluten-free options. Made with the well-researched probiotic strain, LP299V, GoodBelly supports digestive health when consumed daily. Unlike many other live and active cultures, LP299V survives passage beyond the stomach’s acidic environment in order to support the rest of the digestive system. With 70 percent of the immune system dwelling in the digestive tract, healthy gut microflora is vital to overall health.