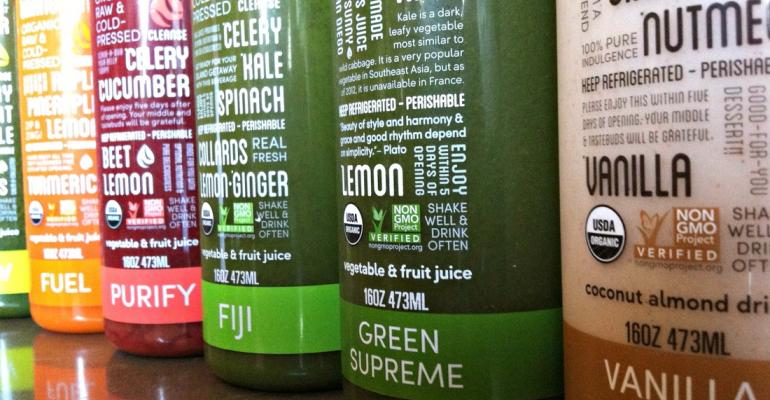 Founded in May 2012, Suja is a leader in the rapidly-emerging organic, cold-pressured "HPP" juice segment. Cold pressure is a breakthrough technology that replaces heat pasteurization as a way to neutralize harmful bacteria. While heat pasteurization can degrade the very nutritional elements and flavors that consumers seek, cold pressure processing creates a safe product with extended shelf-stability, while also enabling juice to retain full flavor and nutrients. Suja currently sells its organic, non-GMO, cold-pressured juices and smoothies at Whole Foods Markets, Sprouts, and select natural and grocery stores nationwide, and has become one of the fastest-growing beverage brands in the country.

In addition to using locally-sourced California organic vegetables and fruits in each juice, Suja is known for its product innovation and "mixology," which has resulted in some of the most craveable and nutrient-rich juice blends on the market. In 2013, Forbes named Suja among the "25 Most Innovative Brands in Consumer and Retail." Suja was also recognized by BevNet, the leading beverage-oriented media company, when Suja's Classic line was named the "2013 Product of the Year" and Suja's Elements smoothie line was named "Best Smoothie or Meal Replacement Beverage."

"We're excited to announce our partnership with ACG and are looking forward to Suja's next stage of growth," said Suja CEO and cofounder Jeff Church. "ACG's experience in the CPG and beverage industries, brand-building expertise and support for our vision make them a valuable addition to the Suja team."

"Suja is a game-changing brand, led by a fantastic team," said Josh Goldin, cofunder and managing partner of ACG. "In a short time, Suja has redefined the juice and smoothie categories, by creating delicious, next-generation products using non-GMO, on-trend ingredients with natural functionality. We are thrilled to be a partner in this exciting business."